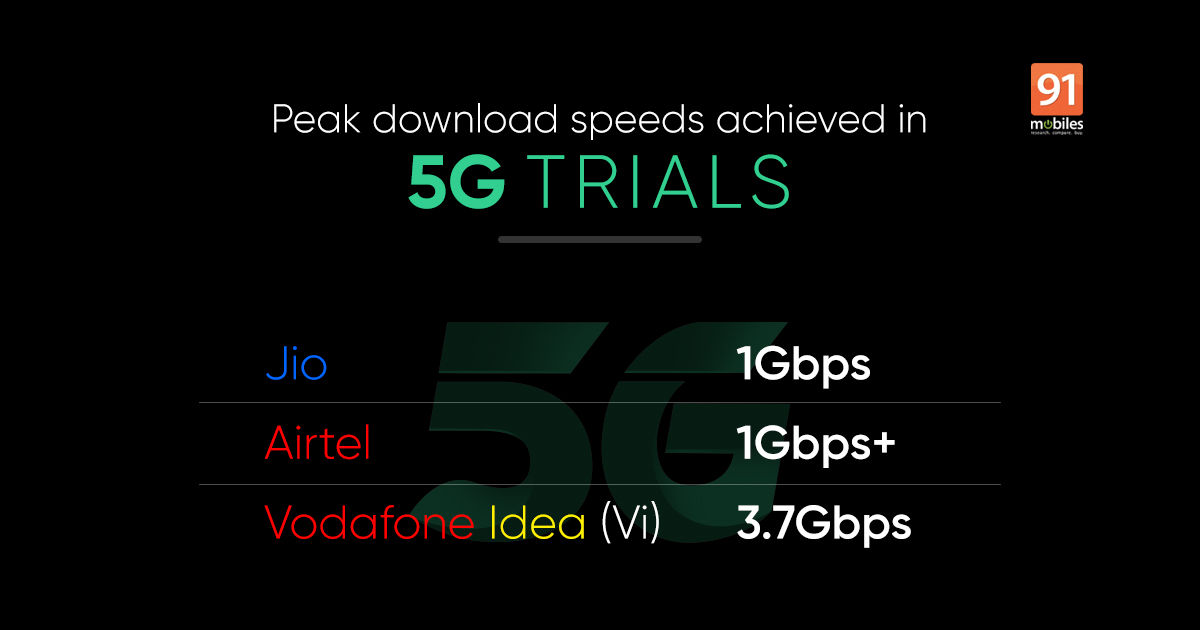 Telecom operators in India have begun the 5G network trial in the country in full swing. Reliance Jio and Airtel have already conducted the 5G network trial in the few metro cities of India. Meanwhile, Vodafone Idea or Vi is the latest telecom operator to join the party, as it has been conducting 5G trials in Pune, Maharashtra and Gandhinagar, Gujarat. Vi says that it achieved a peak 5G speed of 3.7Gbps on the mmWave spectrum band during the trials in Pune. To recall, rival networks Airtel and Jio both claimed peak 5G speeds of 1Gbps in their respective trials, meaning the Vi speed in testing is over 3x faster than the market leaders.

Meanwhile, Vi also recorded peak download speeds of up to 1.5Gbps on the government allocated 3.5GHz 5G band in Gandhinagar, Gujarat. The Department of Telecommunications (DoT) allocated 26GHz mmWave high bands and 3.5GHz 5G bands to Vi in Pune and Gandhinagar. The telecom operator has been conducting trials in an end-to-end Cloud Core captive network lab setup. These speeds were said to be achieved on state-of-the-art 5G Non-Standalone network architecture with NR Radios.

“We are pleased with the speed and latency results in the initial stages of the 5G trials on the government-allocated 5G spectrum bands. Having established a robust 4G network pan-India, delivering fastest 4G speeds, and a 5G-ready network, we are now testing the next-gen 5G technology to be able to bring a truly digital experience for enterprises and consumers in India, in the future,” said Jagbir Singh, CTO, Vodafone Idea Limited.

In May this year, the DoT allowed telcos, including Bharti Airtel, Reliance Jio, Vodafone Idea, and MTNL, to conduct 5G trials in the country on the government-allocated bands. Well, Jio and Airtel have already conducted 5G trials in different cities. After the trial, Jio said that it recorded a peak speed of 1Gbps. Meanwhile, Airtel also achieved over 1Gbps peak 5G speeds during the trials. Airtel also claims that it conducted successful cloud gaming sessions in Manesar on the mid-band 5G spectrum.