Xiaomi had an interesting last year in India. After announcing its foray into the Smart TV segment in the country, the brand was soon forced to hike the price of its Mi LED Smart TV 4 (review), among other products, due to the continuous devaluation of the Indian rupee. The enticing original price tag for the TV drew attention like wildfire but sadly, the subsequent hike left a bad aftertaste. With the new year, the brand has now announced the launch of Xiaomi Mi LED 4X Pro, which has surprisingly been given the original price tag of the last year’s model, i.e. Rs 39,999. Has the brand cut corners with the new offering? To get the answer to this question, read our full review. 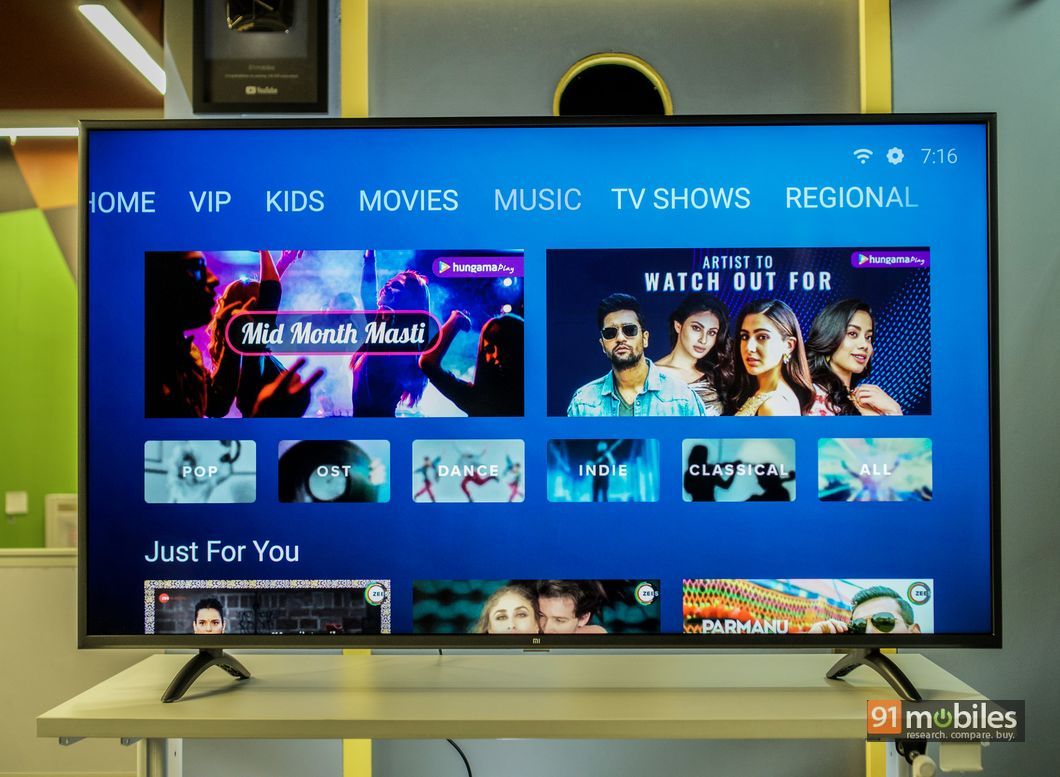 When you compare the Mi LED TV 4X Pro with the last year’s 55-inch TV, you’ll notice the difference in design right away. We usually see that companies try to progressively make slimmer TVs with each passing year. However, Mi LED TV 4X Pro is an anomaly. The new 55-inch TV looks slightly bulkier in comparison to last year’s model and comes with a relatively thicker plastic border on all sides of the display. 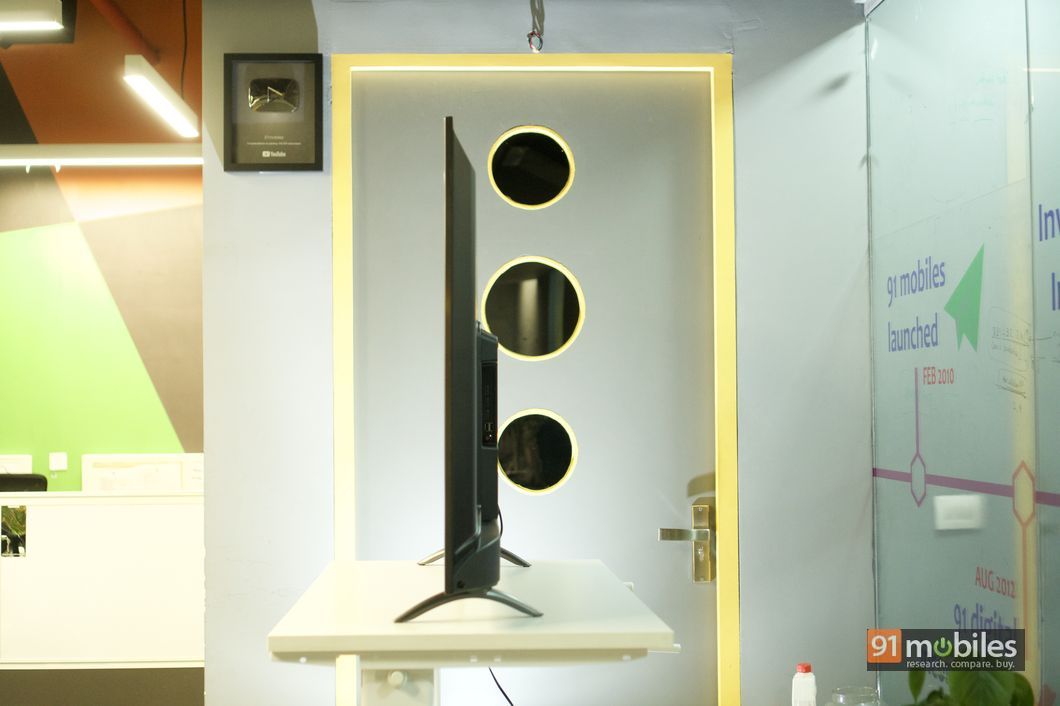 Before you jump to conclusions, we are not suggesting that the Mi LED TV 4X Pro looks bad by any means. The simple yet elegant design language will go a long way for this TV to blend into your living room. There might not be any futuristic design element to boast here but at this price, this aspect can be given a pass. Unless you are particular about the design of your TV and willing to spend extra bucks for the sake of it, we recommend you to not be bothered about the slight downgrade in terms of design. 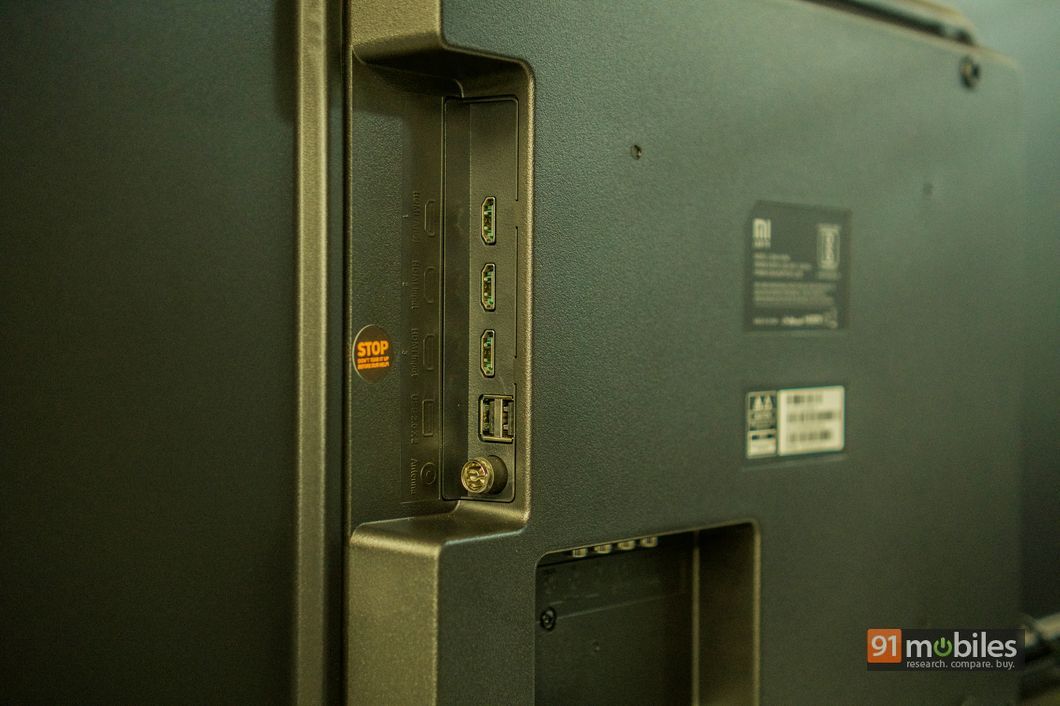 Let’s move on to the ports. You will find three HDMI ports on the back panel of the 4X Pro. One of these ports comes with support for ARC, which means you can control compatible devices like a soundbar supporting this feature with the TV’s remote itself. Moving on, you also get two USB 2.0 ports, an Ethernet port, AV, and an S/PDIF port. The 4X Pro comes with built-in 802.11ac Wi-Fi too. The ports are present on the left side of the panel and we didn’t face any issues while accessing them. If you plan on mount the TV on to a wall, you might need to keep this in mind though. 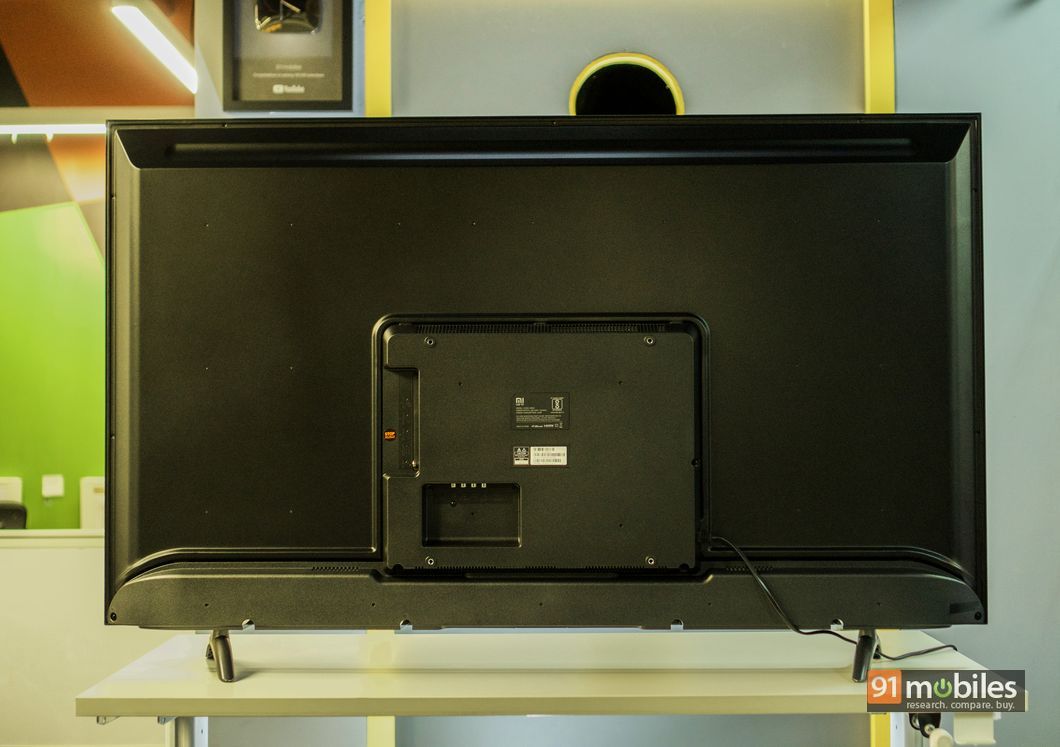 The new LED TV from Xiaomi does come with a table stand, but in case you want to place your TV on a wall, you’ll have to buy the bracket separately, which is a non-issue really but needs to be pointed out. Here’s a closer look at the design:

It would be unfair on our part if we delay the discussion about the display quality offered by the 4X Pro any longer. So without much ado, here we go. The Mi LED TV 4X Pro ships with a 55-inch 4K panel with 60Hz refresh rate. We’d be lying if we say that we were not impressed by the display quality offered by the 4X Pro. The 10-bit panel comes with support for HDR 10, and as a result, is capable of producing a larger bandwidth of colours. It’s hard to say if there is much difference in terms of display quality if you compare last year’s model to the Mi LED TV 4X Pro, and this is definitely a compliment for the latter. Thankfully, in comparison to last year, we have much more HDR content available on Netflix as well as Prime Video and we managed to go through a range of titles using an Amazon Fire TV Stick 4K (as these apps aren’t available natively on the Mi TV), and can safely say that the HDR content looks brilliant on the 4X Pro. It’s worth pointing out that in both Netflix and Prime Video streaming services played via the Fire TV Stick, we had to manually tweak the settings to increase brightness on the streamer while playing HDR content, as the default settings seemingly presented rather dark visuals. In order to do this, we had to change the brightness settings from inside the Fire TV stick interface as changing it from the homescreen of the Patchwall UI doesn’t impact the custom picture settings available for external sources. The brightness was not an issue with non-HDR content and the sharpness was consistent for all range of titles, be it 4K, 1080p, or even HD videos. 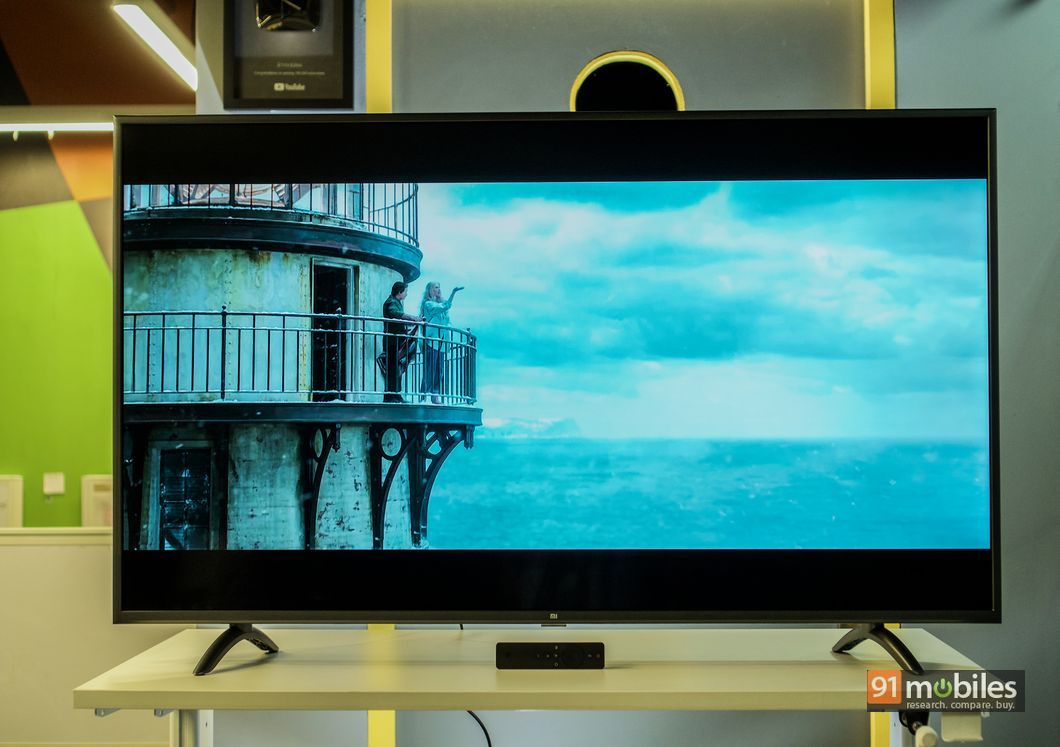 We even managed to play a few games on the TV (using a Sony PS4) to understand if the 6.5ms response time is manageable or not. To put it simply, if you like playing games like Red Dead Redemption 2, GTA V, Tomb Raider, or any other game where the slightest of input lag does not pose a big issue, you’ll have no problems whatsoever with the Mi LED 4X Pro. In fact, the games look gorgeous on the large 55-inch 4K panel. If you have a console that can support 4K visuals, like Xbox One X or the PS4 Pro, you will be treated to even better visuals. However, if you like playing competitive first-person shooters like PUBG, Counter-Strike, or attempt for Victory Royale in Fortnite, you will have to switch to a monitor as the input lag will end up costing you many games. Other than this very specific scenario, you won’t have any issues with gaming on the new Xiaomi TV and it is an enjoyable experience as a whole. 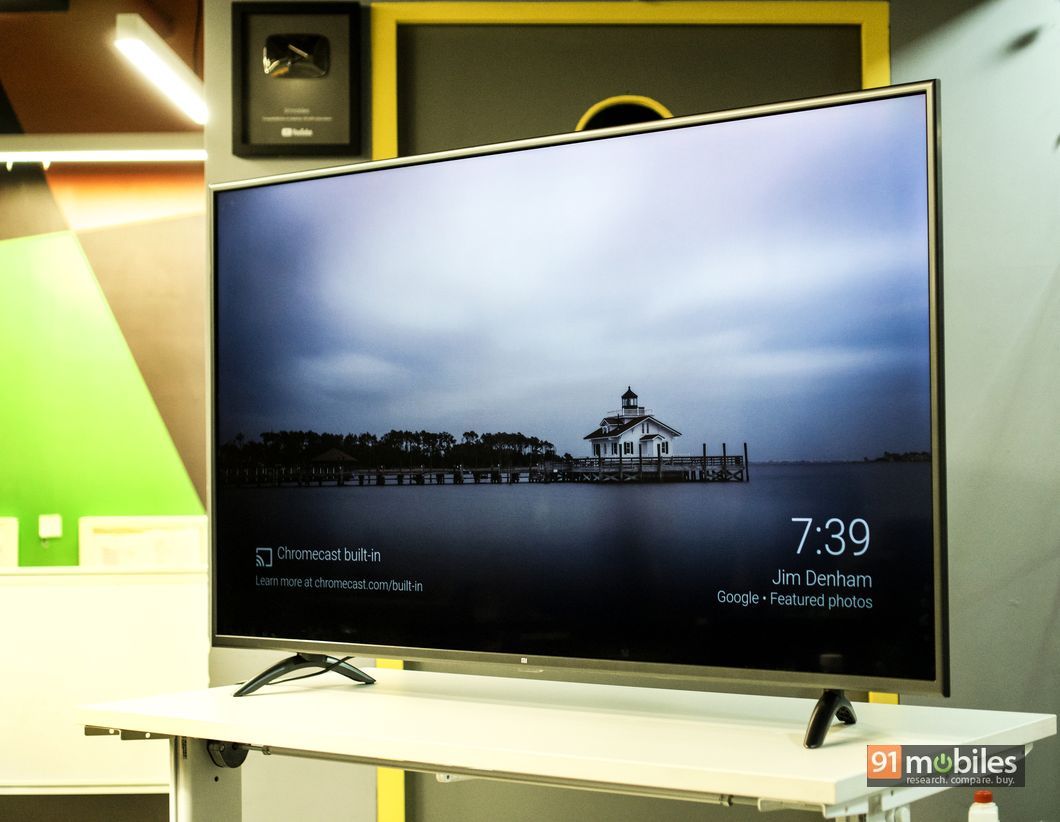 Having mentioned all the positive points, the viewing angles on the panel could have been better. In most living rooms, the new panel from Xiaomi should fit in perfectly but as we are talking about a large display it would be more suited to large-sized rooms. If the viewing distance is not kept in mind and you sit too close to the TV at a slightly tilted angle, you might find yourself in a bit of a pickle and lose out on a great viewing experience.

The new LED TV from Xiaomi is powered by a 64-bit quad-core Amlogic Cortex A53 chipset, which is accompanied by 2GB of RAM and a Mali-450 GPU. There is 8GB of onboard storage as well, in case you want to store some files locally. A crucial accessory for the TV, the Bluetooth remote for the 4X Pro is identical to the one that the company shipped with Mi LED 4A Pro. As the remote makes use of Bluetooth and not infrared, you are not required to place the controller in the line of sight to the TV. 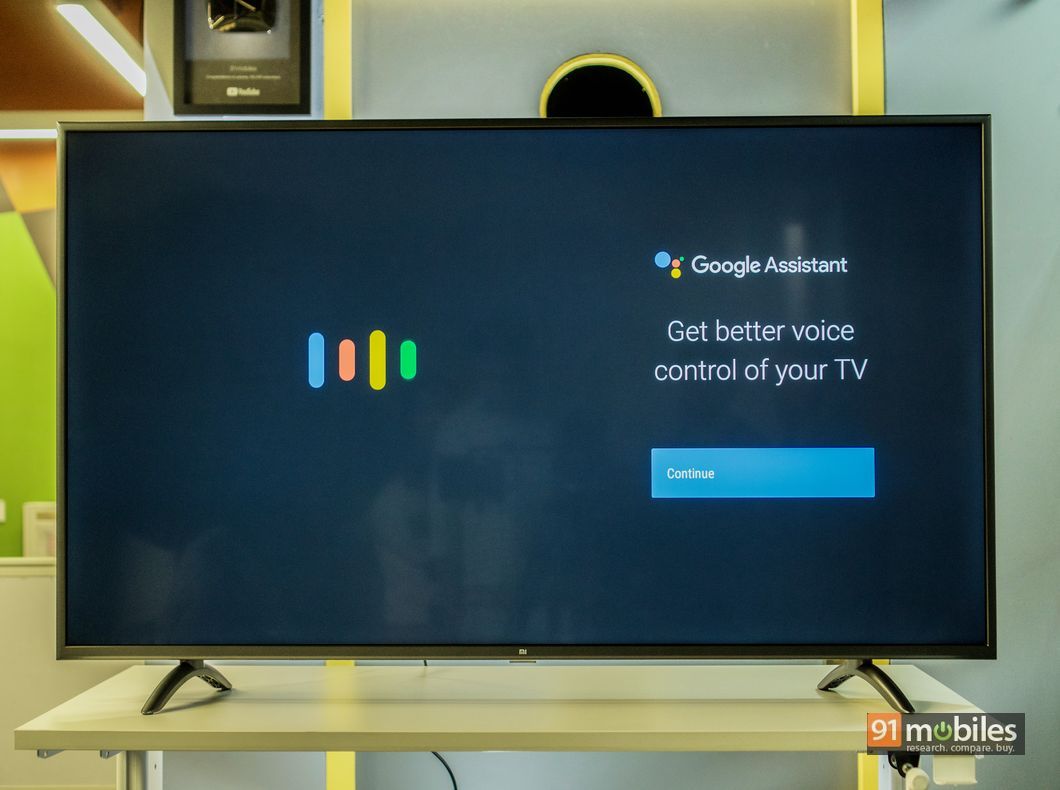 There are dedicated buttons to access PatchWall UI and the Android TV interface, and also for the Google Assistant on the remote for voice instructions. 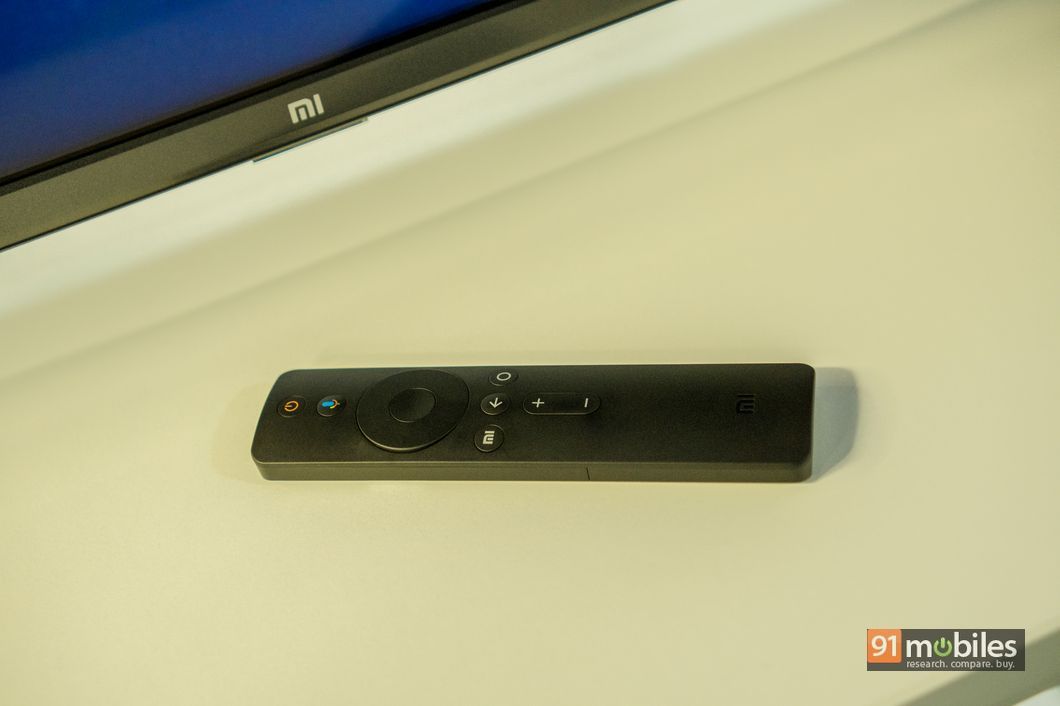 The Mi LED TV 4X Pro comes with similar software as the Mi LED 4A Pro, which we reviewed last year, and tries to provide the best of both worlds. This means you get the company’s proprietary PatchWall OS, which has been clubbed along with Google’s Android TV interface. You can switch over from one interface to the other with just a simple click of a button on the remote. 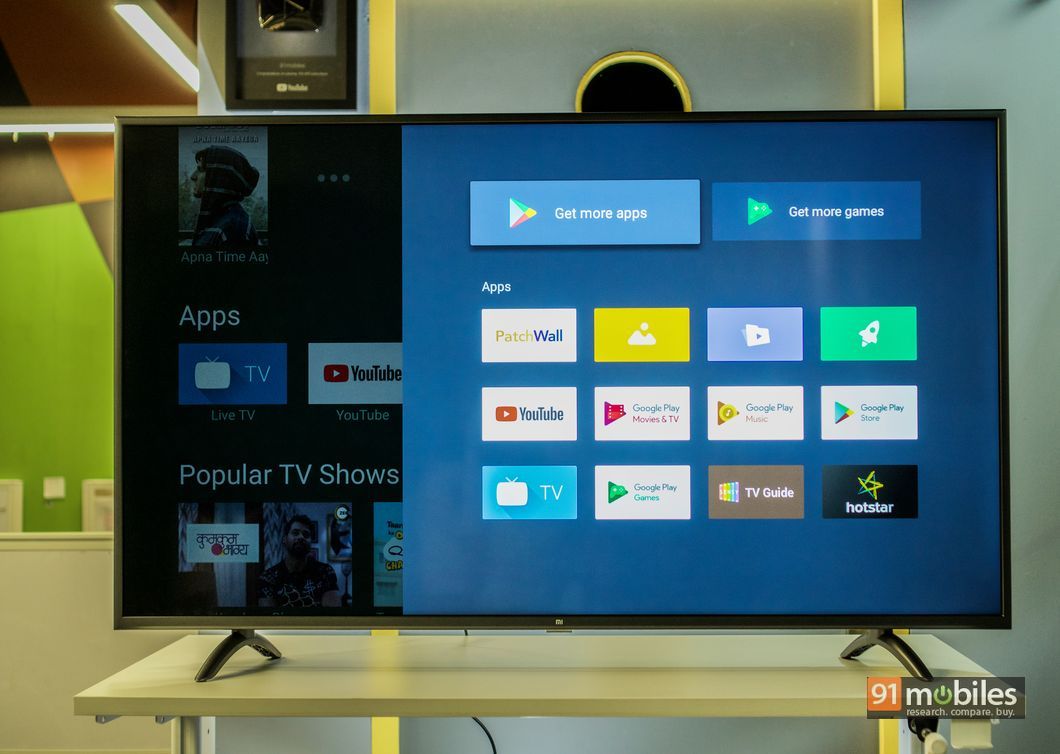 Now, PatchWall UI comes with a huge library of content as Xiaomi has partnered with Hotstar, Voot, and Sony Liv, among others. The proprietary UI from Xiaomi does a great job of handling DTH services (via respective set-top boxes) to a point where they don’t even feel like external inputs anymore. This is made possible through the Sensy integration into the PatchWall UI. To make use of this functionality, you’ll need to buy the Mi IR cable, which is sold by the company separately for Rs 199 through its online store. Once you connect your set-top box with the TV via this cable, Sensy fetches the Electronic Program Guide (EPG) data from web for your particular DTH provider, and displays content in card format. You will essentially be able to see details about the ongoing TV shows and movies through this unified interface. What’s more, you can also control and switch to the broadcast of your choice directly using the MI TV’s remote itself.

On the other hand, with Android TV, you will be able to download and run applications from the Google Play store. With built-in Google Chromecast and voice support for Google Assistant, enabled by the remote, as a user, you are presented with more options at your disposal than most other TVs. 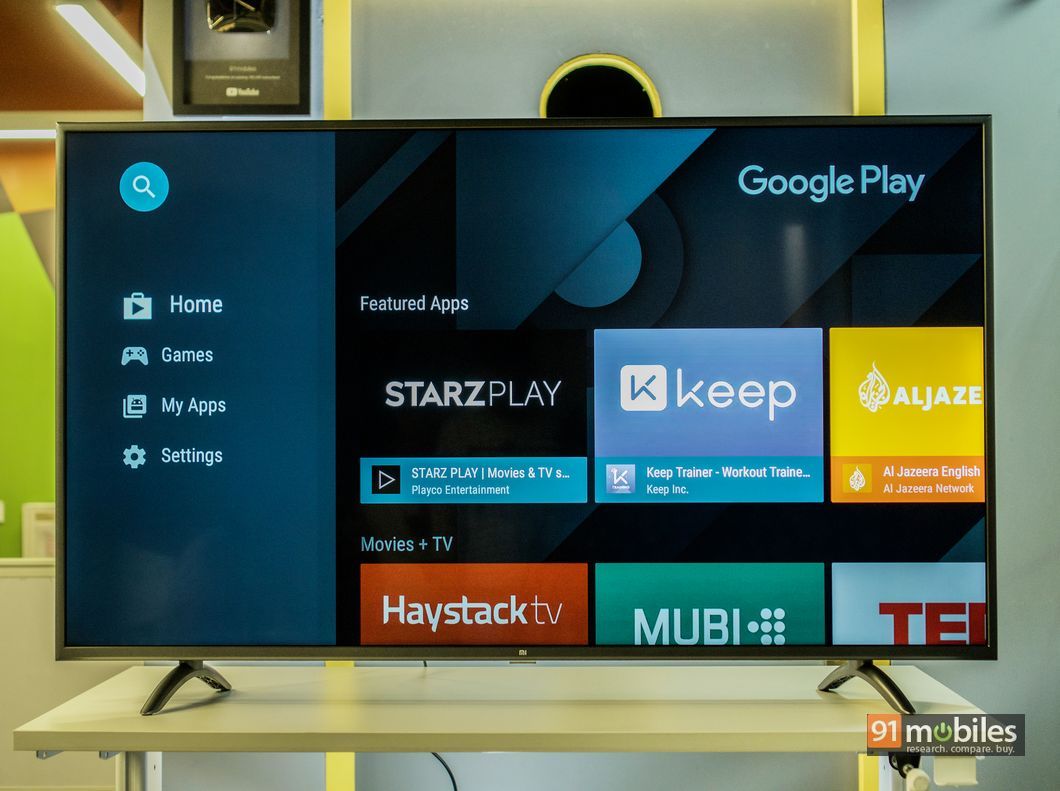 Coming to the lacklustre aspects of the software, you still don’t get access to dedicated apps from Netflix and Amazon’s Prime Video with the 4X Pro. The obvious workarounds include buying and plugging in an Amazon Fire TV 4K Stick or another streaming device like the Apple TV 4K. Overall, if we talk about the user interface, even new users will get used to of both PatchWall and Android TV in no time. Thankfully, most of the controls are easily accessible and are available from the home screen itself.

Traditionally speaking, most large screen TVs that fall in the budget price range do not feature good speaker quality. Even last year, despite Xiaomi claiming that the Mi LED Smart TV 4 came with both Dolby and DTS-HD sound certification, we did not find the audio quality to be all that great. Coming to the Mi LED TV 4X Pro, the UHD LED TV comes with two 10W speakers and unfortunately, even in our time with the new Xiaomi TV, we did not find the audio quality to be impressive. The unit can get really loud on high volume levels but the thump was missing to a large extent and sound fell a little flat most of the times. Now, as the company has launched Xiaomi Mi Soundbar (review) along with the TV, that might work out as a great solution for this. Having heard the quality of the soundbar, we would definitely recommend you to pick it along with the 4X Pro as both these products complement each other really well. 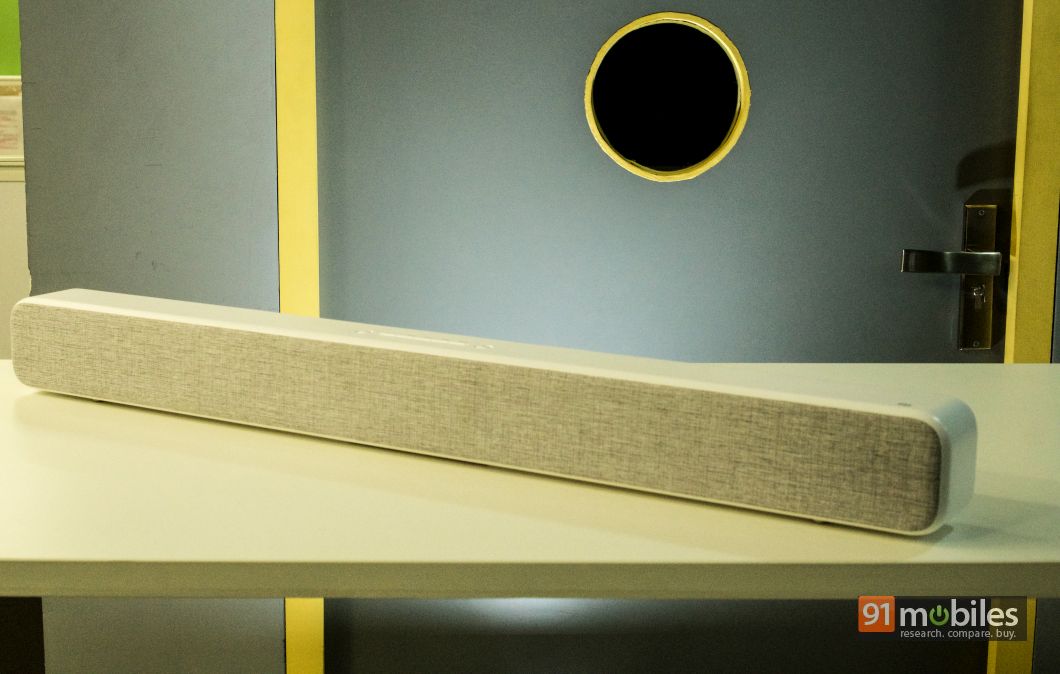 The best thing about Xiaomi’s new Mi LED 4X Pro is that it cannot be beaten in terms of value for money. The kind of features and panel quality offered by Xiaomi are still unparalleled in this price range. The minor hiccups presented by the TV can also be solved by easy workarounds. We would have preferred a design like last year’s model on the new TV but we can still confidently recommend the 4X Pro as the product delivers on multiple fronts.