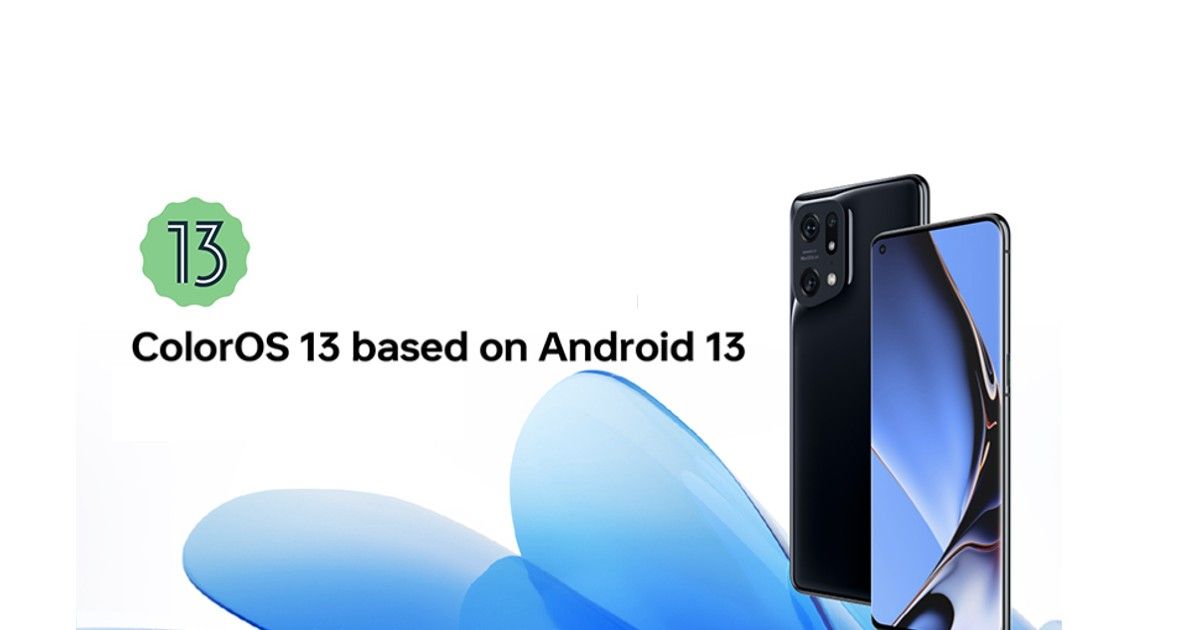 ColorOS 13 is OPPO’s next iteration of custom skin for its smartphones and tablets. The custom skin is based on Android 13 with all the core privacy and safety features baked in. Speaking of the ColorOS 13 features list, it focuses on interconnectivity with multiple devices, enhanced experience for large displays and visual improvements throughout the UI by introducing ‘Aquomorphic Design’. OPPO claims the new UI is highly inspired by nature and more specifically by water’s state and form which one may spot on various elements throughout the software such as quick settings panel, buttons, and icons among other places.

For those wanting to get an early hands-on of the latest skin, the brand has initiated the beta rollout starting with this year’s flagship phones – OPPO Find X5 and X5 Pro. Similarly, other OPPO devices will receive the ColorOS 13 beta update as well in the upcoming months. Check out the full list of ColorOS 13 supported devices below:

ColorOS 13 was officially announced globally on 18th August 2022 where the company revealed all the new features and improvements to the skin. This was followed up by unveiling of the beta rollout schedule for all the existing OPPO devices. The first phones in line to receive the ColorOS 13 update based on Android 13 are the Find X5 and Find X5 Pro in August.

That said, the ColorOS 13 release date in India isn’t expected until September. Since the Find X5 series  never arrived to Indian shores, the Reno 8 Pro 5G will be the first OPPO smartphone in the country to rock the ColorOS 13 skin in beta form by September 2022. The beta rollout will continue with more devices in October with Reno 8, Reno 7 series, F21 Pro and many more. This will be followed by ColorOS 13 final build release later this year or early next year.

ColorOS 13 brings in a ton of new features and refinements over the existing UI. Check them out below. 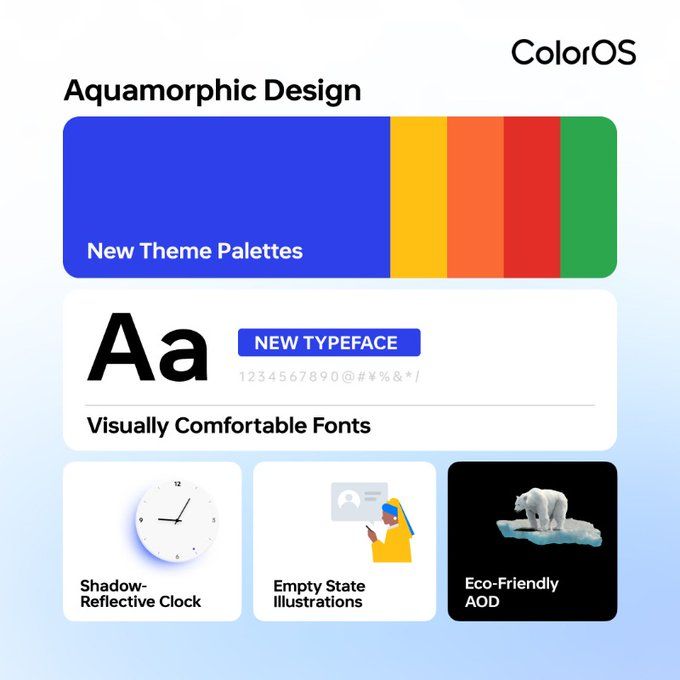 ColorOS 13 brings OPPO’s new ‘Aquamorphic Design’ language to give the UI a fresh and appealing look by implementing a colour palette inspired by nature. Users may notice design upgrades in various first-party apps such as the clock which changes its form according to sunrise and sunset, brand new water-esque charging animation along with updated toggle buttons and icons. Apart from that, OPPO has also given its default font a slight tweak and the ability to change font weight for better readability. Expect some refined system-wide animations as well.

ColorOS 13 update is said to bring Material You theming to OPPO phones which will allow users to not only pick accent colours from a wallpaper but also apply those particular colours to the icons on the home screen and app drawer. 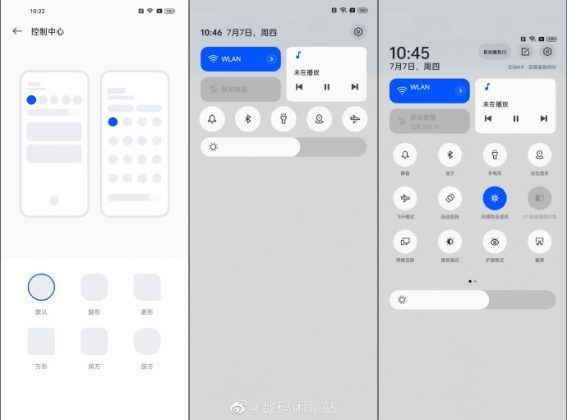 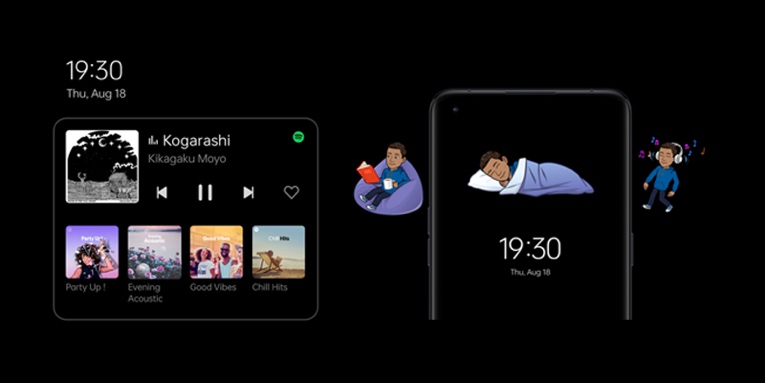 OPPO has taken Always-On Display to the next level with ColorOS 13 by integrating music and Indian food delivery apps such as Spotify and Swiggy respectively. What it means is that users will be able to control music and change the tracks played on Spotify through the AOD itself without the need to unlock the phone. As for food delivery apps, the AOD will show the tracking status in a minimal manner with the relevant information. Apart from that, the Insight AOD from OxygenOS makes its way to ColorOS 13 as well which indicates the number of times the user has unlocked their phone to limit the device usage. Lastly, OPPO also introduces a new AOD style called ‘Home’ which showcases how the animals are facing consequences due to global warming. 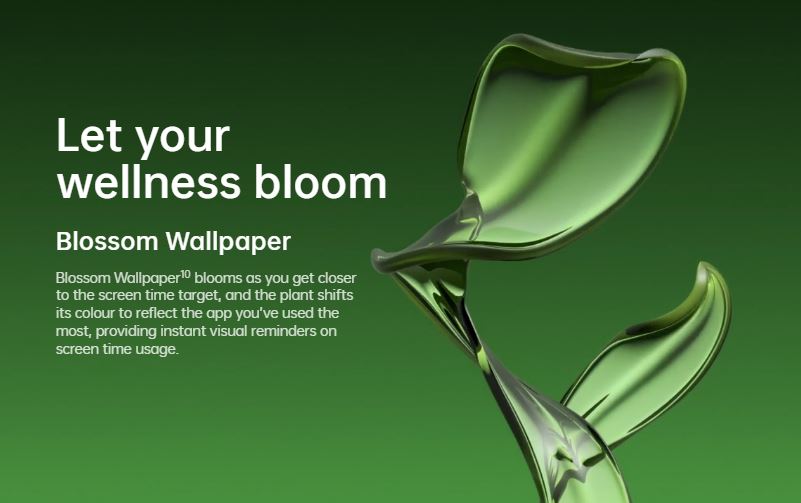 Aimed at maintaining the digital wellbeing of its users, ColorOS 13 comes with a live ‘Blossom wallpaper’. This is basically a seedling that indicates the amount of phone usage based on the colour of the most used apps throughout the day. Additionally, users can also set a screen time limit beyond which the leaves of the plant start falling off suggesting a deviation from the daily phone usage limit. 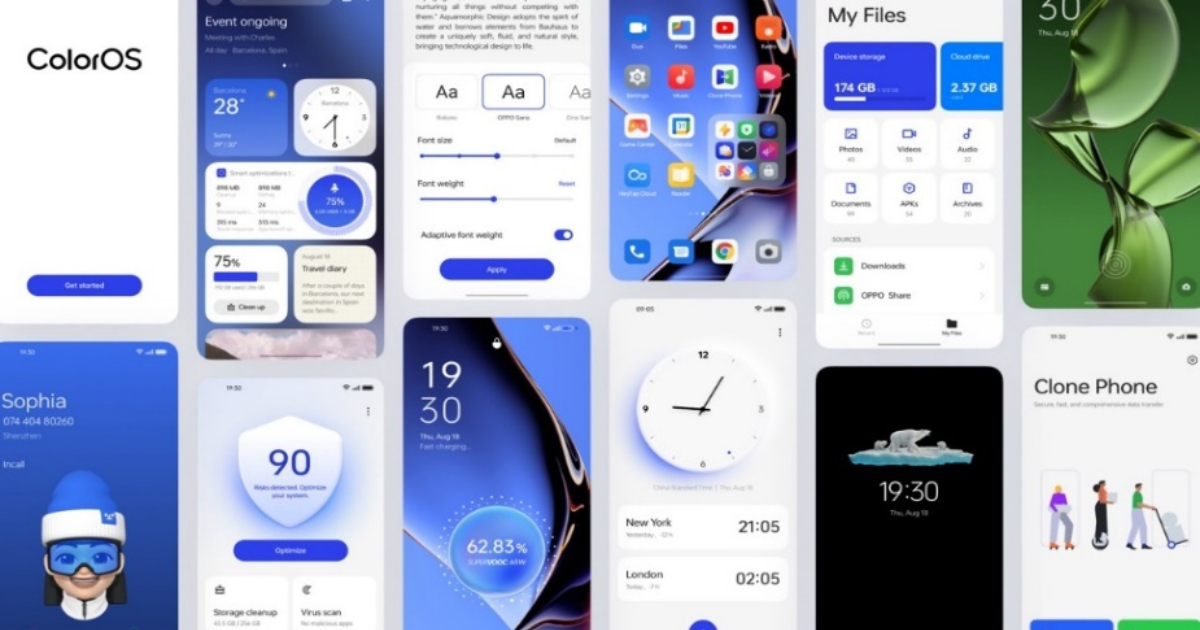 One of the prominent changes ColorOS 13 brings to the homescreen is the option to create enlarged folders in which the apps will be clubbed into one big compartment with multiple swipeable pages within it. Other than that, the new UI is also said to bring improved and Aqaumorphic Design-oriented widgets of clock, weather, and battery usage among other first-party widgets. The Shelf which consists of quick shortcuts, a step counter, weather information and other useful elements has also undergone some visual changes.

Introduced with previous iterations of ColorOS, Multi Support Connect is said to improve by a large margin with the ColorOS 13 update. It now allows users to transfer more file formats between OPPO smartphones, tablets and PC. Further refinements that have been made are related to app support where users will be able to display and use multiple mobile apps on the PC screen wirelessly. 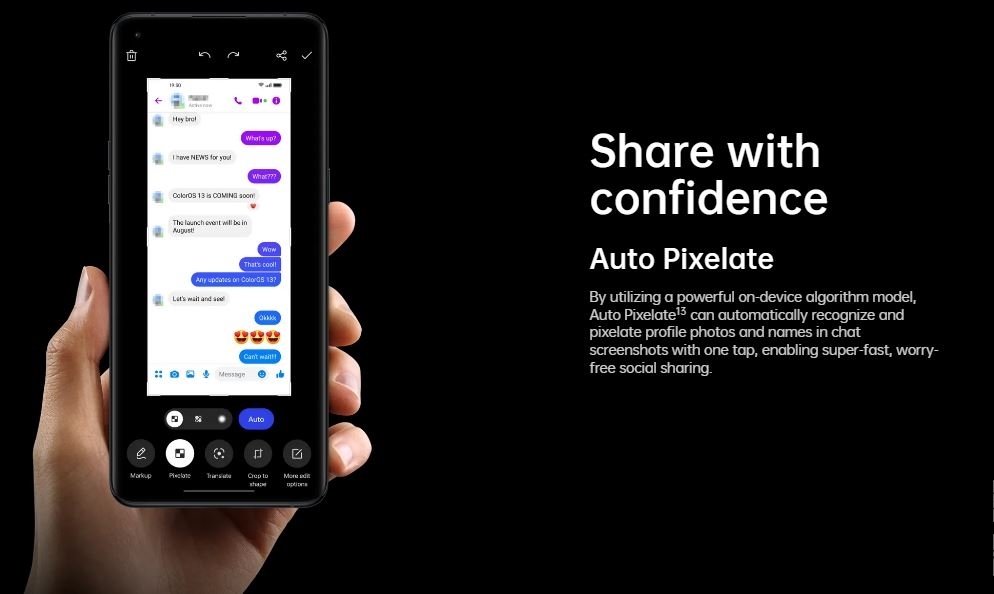 Since ColorOS 13 is built on top of Android 13, the skin will utilise all the security and privacy features the platform brings such as picking a photo to share from gallery without accessing other media contents, more strict location permissions and automatically deleting clipboard’s content within an hour to prevent apps from accessing it. Other than that, OPPO has inbuilt an Auto Pixelate feature that can smartly recognise and blur out profile pictures and names when sharing a screenshot of a chat. The Private Safe feature to store documents and media is getting a security upgrade as well with better encryptions.

ColorOS 13 will be rolled to an end number of devices in OPPO’s smartphone and tablet portfolio. These devices range from entry-level phones all the way up to high-end phones. Since the update has been announced globally, the company has also revealed the ColorOS 13 beta update rollout schedule. So if you’re keen on getting an early hands-on experience of the latest ColorOS version, here’s when to expect the beta release for your OPPO device.

Although the aforementioned list is related to beta rollout, expect the stable ColorOS 13 to go live in a couple of months’ time since its beta release.

How to install ColorOS 13 Beta

Once OPPO announces the ColorOS 13 beta rollout, here’s how you can install the beta update on your eligible OPPO smartphone.

OPPO is set to reveal its next generation of custom skin i.e. ColorOS 13 on August 18th at a global launch event. As per Oppo, the new OS “integrates Android 13’s underlying safety and privacy features and provides customizations similar to Google’s Material You.” The company is also expected to reveal a list of eligible devices for the update along with a rollout schedule.