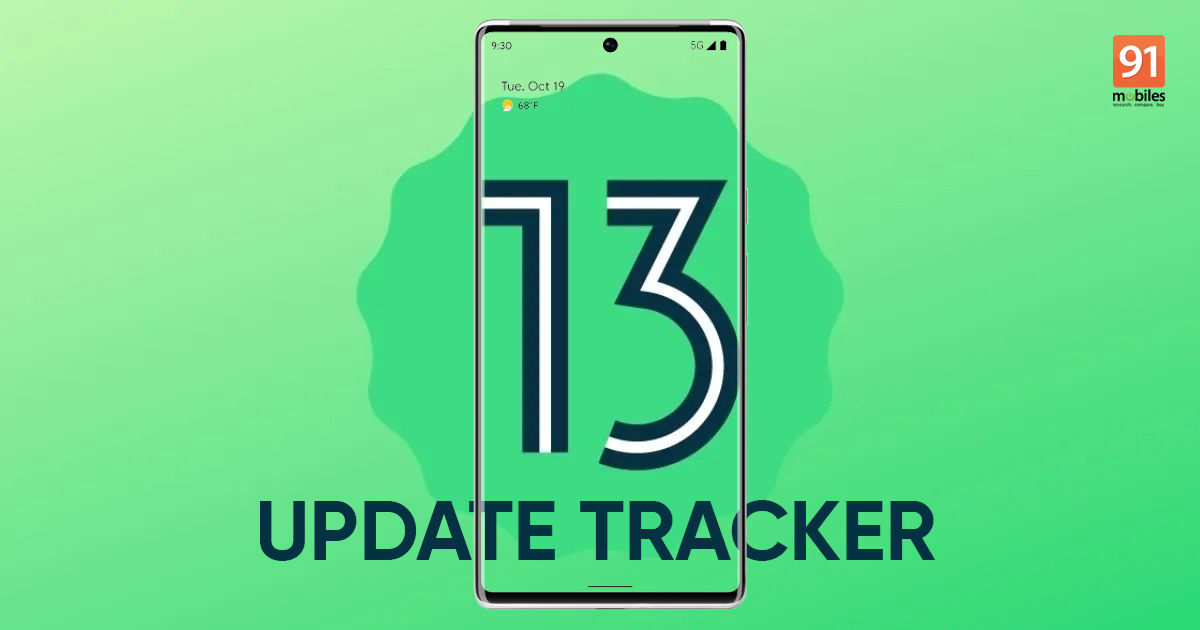 Android 13 release date, features, supported devices list, codename, and more have been doing the rounds off the internet ever since Google announced the developer preview of the OS back in February. The Android 13 is believed to be the successor of Android 12, which introduced one of the biggest design overhauls the OS has seen since the Android 5.0 release with the Material You design language. While the Smartphone OEMs including Samsung, OnePlus, Xiaomi and others continue to push Android 12 on their devices, Google has already started testing the next iteration of its widely popular OS. Let’s take a look at the new things Android 13 will bring to the table.

This beta 2 update will be followed by the Android 13 Platform Stability build in June, which will comprise the final SDK and BDK APIs of the OS, and the final release sometime in August or September.

Just like the previous version of Android, Google is adding many new features to the Android 13 platform. There are Material You changes, privacy and security features, new Project Mainline module additions, new behaviour for background apps, and more.

To improve the privacy and security of Android users Google is introducing a new Photo picker. Android 13 will add a new system photo and video picker that allows users to share the required photos and video without giving target apps permission to access all device files. The private photo picker will come as an extension to the document picker UI which allowed sharing of files without granting the apps the permission to view all files. Google plans to bring this functionality to older devices as well through an update to the MediaProvider module via Google Play system updates on devices running Android 11 and above.

The OS will also allow users to choose between “Photos and Videos” and “Music and Audio” when an app asks for permission for file access. Android 13 will show you more alerts whenever an app access something in the background, even something as small as an app accessing your clipboard.

A more private Nearby Device permission for Wi-Fi

Previously if the apps wanted to search for nearby devices, apps had to turn on the Wi-Fi along with the location permission. This is changing with Android 13. Google is introducing a new way for apps to find nearby devices without needing to access the location with the new NEARBY_WIFI_DEVICES runtime permission. 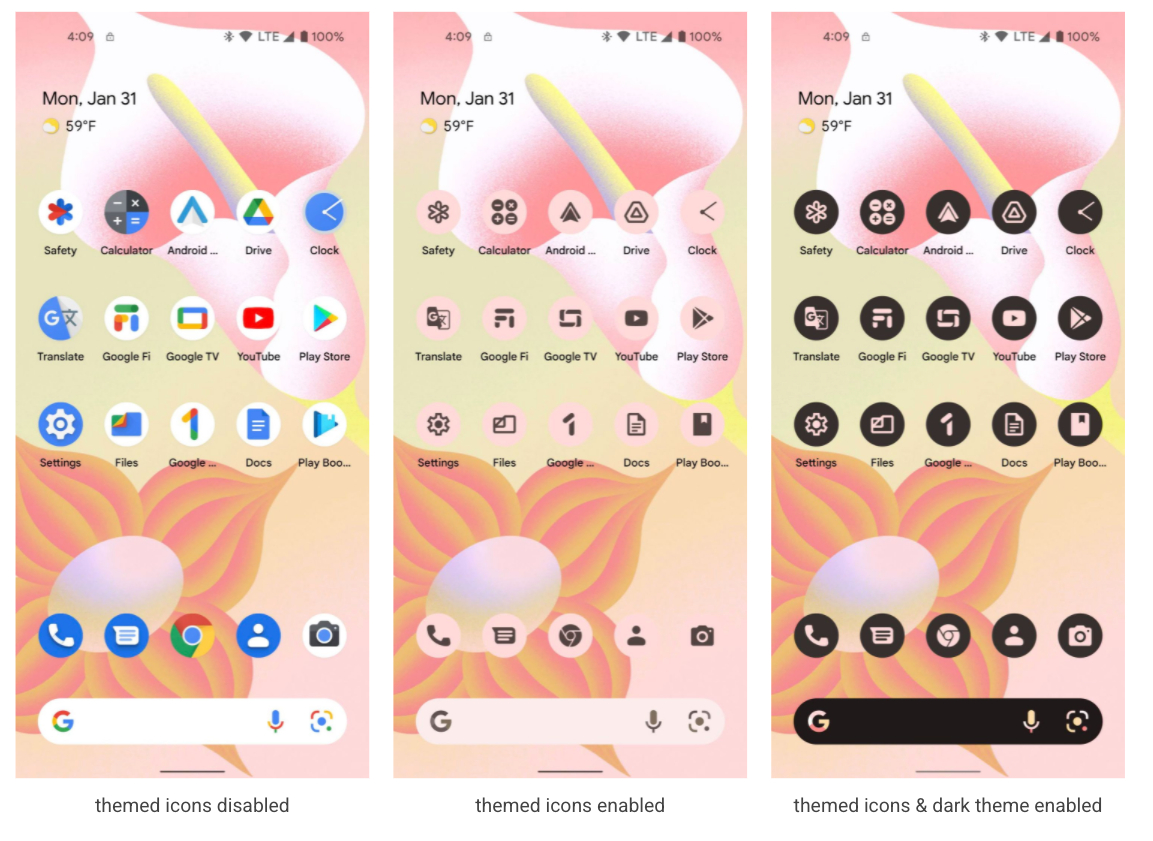 Google is iterating on the Material You theming to include app icons as well. Apps can now change their icons based on the wallpaper and other theming settings currently active on the user’s device. Previously apps could only adapt the Material You theming just in the app’s UI, but as you can see in the above image, we are getting some interesting changes to app icons behaviour in Android 13. But there’s a caveat here, Google is asking developers to add a monochromatic app icon and a change to the adaptive icon XML. So, convincing all the developers to comply with this new theming system might be going to take a bit of time just like what happened with the Adaptive icons situation on Android 8.

To help multilingual users, Google will be adding a new feature where users can select the desired language on a per-app basis. What this means is users will be able easily to select the app language which is different from the current system language. Developers can use the new platform API to easily get the default system language or set the user desired language in their app, for an improved experience.

Google will be adding a new Project Mainline Bluetooth and Ultra-wideband module. Project Mainline was launched with Android 10 with hopes to modularize Android components so Google can update them automatically via Google Play system updates, without any interruptions required from the OEMs. Previously, Android 12 added Android Runtime (ART) module as a major updatable part, and it is good to see Google continuing the tradition with Android 13.

Android 13 will see the addition of Bluetooth LE Audio to enable high fidelity audio streaming without consuming too much battery that high-resolution audio streaming usually demands. This will be an interesting addition as most wireless earbuds don’t have a battery life that can be called impressive. Google notes that it is adding this functionality on top of Bluetooth LE, so if the device had Bluetooth LE capabilities previously, users can expect to get this functionality when they update their devices to Android 13.

Google is introducing improved text wrapping for Japanese text in Android 13 so developers can make improved apps. This is what Google says about the new feature “TextViews can now wrap text by Bunsetsu (the smallest unit of words that sounds natural) or phrases — instead of by character — for more polished and readable Japanese applications.”

Additionally, the Android 13 comes with native support for HDR video, per-app language selection, and a new unified Security & Privacy settings page that will show users easy-to-understand colour-coded indicator of their device’s safety status and how users can improve it. The OS also features Cinematic wallpapers, dark mode for bedtime, an App drawer in the taskbar, and more multitasking options for tablets than ever before.

Android 13 Beta is already available for download on several Pixel devices. So we can expect that the following Pixel devices will get the Android 13 update.

These Samsung devices are likely to get Android 13 update

These are the phones that are confirmed to get Android 13. Beyond this list, not many manufacturers have announced their rollout plan for Android 13. However, several 2022 flagship devices from Samsung, OnePlus, Realme, Oppo, and others are expected to get the Android 13 update.

While Google has publicly shelved the practice of naming Android versions after desserts, according to several reports, it seems the Android 13 is internally named “Tiramisu”. So, it is good to know that our beloved Android is still getting named after desserts, at least internally. Google has already released two Developer Previews of Android 13, and Google is further expected to release at least three more Beta releases before reaching the Platform Stability milestone sometime in Q3 of 2022.

You can already install the Developer Preview on Pixel devices, and if you don’t have a Pixel device lying around, Google recommends you install the available 64-bit images on Android Emulator in Android Studio. Google has also provided GSI images so you can install Android 13 Developer Preview on compatible devices which allow GSI images. It is worth noting that, though you can install the developer preview on a range of devices, they are not meant for daily use, Google primarily provides these Previews for testing purposes. You can find the complete Android 13 installation guide for Pixel devices and Android Emulator here. For more information on Android releases, including Preview and Beta updates, you can follow the Android Developers blog.

Google has announced the Android 13 Beta 2 build for Pixel and a handful of non-Pixel devices. Interested users can download the build by visiting the Google Android beta website.

In addition to Android TV, beta testing Android 13 for Google TV has also begun. The beta update can be installed on the ADT-3 Developer Kit.

Google has released the first beta of Android 13 to eligible Pixel phones. This comes just days before the OS official release date. The Android 13 official features will be introduced at Google I/O 2022 event, which is scheduled for May 11th and 12th.