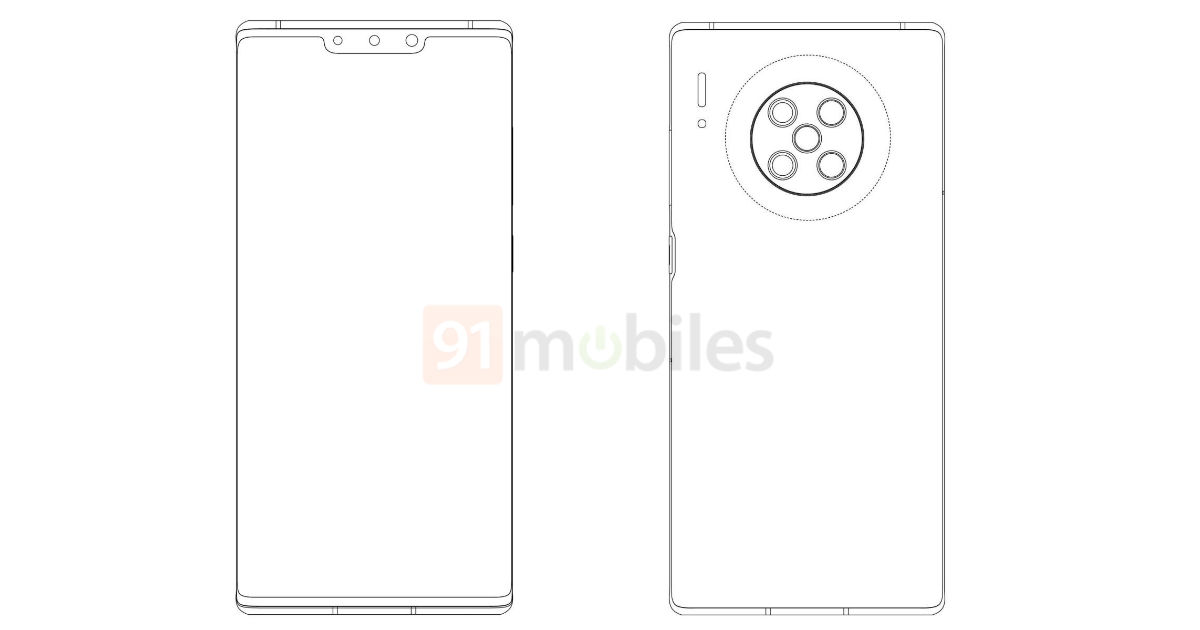 The Huawei Mate 40 Pro smartphone could have a total of eight camera sensors, a new design patent filed by the Chinese company in Germany shows. Huawei’s Mate 40 Pro smartphone, which is not expected to launch till at least Q4 2020, could retain design reminiscent of the Mate 30 Pro from last year, but with an added camera sensor in the circular alignment in the back. Coupled with the three sensors in the front, the Huawei Mate 40 Pro may have a total of eight camera sensors, the highest on any smartphone yet. And the thought of five cameras on the back is not too outlandish — there are already a few smartphones with Penta-camera setups in the market.

A design patent filed by Huawei with German patent agency DPMA shows a smartphone with design similar to that of the Mate 30 Pro, but — as mentioned earlier — with an extra sensor between the usual four. Now, there’s no mention of the Mate 40 Pro moniker in the patent and there is always the possibility this could be a Mate-branded offshoot of the Mate 30 Pro that may launch sometime in 2020. Or it could be a limited edition, premium version of Mate 30 Pro smartphone, similar to the Porsche Design edition from last year. However, since the company has not launched a Mate-branded smartphone in the middle of the year so far, there is slim possibility of that happening.

Penta-cameras are an interesting proposition as smartphone brands keep trying to one-up each other with more sensors and megapixels. Xiaomi has chosen to put a telephoto, depth-of-field, ultra-wide-angle, and macro lens alongside the primary 108MP sensor on its Mi Note 10 and Mi Note 10 Pro smartphones. On the other hand, HMD Global has five 12MP sensors on the Nokia 9 PureView — two capture the shot in colour and three in monochrome. The five sensors shoot the same scene in different exposures and then combine the five shots into a single photo that offers more details than the sum of its parts. It will be interesting to see what sort of implementation Huawei plans for the Mate 40 Pro and its five camera sensors.

To recall, the Huawei Mate 30 Pro had a 40MP primary SuperSensing camera, a 40MP ultra-wide-angle Cine camera, an 8MP telephoto lens, and a 3D ToF camera for depth-sensing. The smartphone was rated the best camera phone in the market by industry authority DxOMark. However, it didn’t make its way to many markets as it lost access to Android due to the US ban, following which it lost access to Google Play app store and much of its utility as an Android phone. At the moment, there is no word on what we can expect from the successor of the Mate 30 Pro, but we can certainly look forward to a new full-fledged app store from Huawei to complement the powerful hardware that will be used in Mate 40 Pro.