“The Karbonn Sparkle V is part of the Android One trio, and sparkles as a budget option”

As a brand, Google touches millions of lives across the globe through its suite of services, platforms and what not. But it still sees untapped potential for growth, especially in emerging markets like India. Its Android One program is part of the same thrust, attempting to bring even more people under the umbrella of its apps and services. The concept of connecting the next billion people to the web isn’t new, and neither is the promise of a capable device for less. When the Android One initiative was announced at the I/O conference back in June, the idea seemed solid enough – to shake hands with hardware manufacturers and offer budget smartphones running stock Android. Just like the Nexus range where the search giant has tied up with various brands to showcase the Android platform in its birthday suit, the handsets under the Android One plan come with the latest builds of the OS, and Google has taken the onus upon itself to keep them updated. Micromax was the first brand that was announced as a hardware partner, with Spice and Karbonn also part of the list. India got the privilege of being the country where the Android One program made its global debut, and each of the aforementioned brands have outed their offerings – the Micromax Canvas A1, the Spice Dream UNO, and the Karbonn Sparkle V (first impressions | FAQs). The three smartphones rock the exact same specs, and are priced similarly as well. 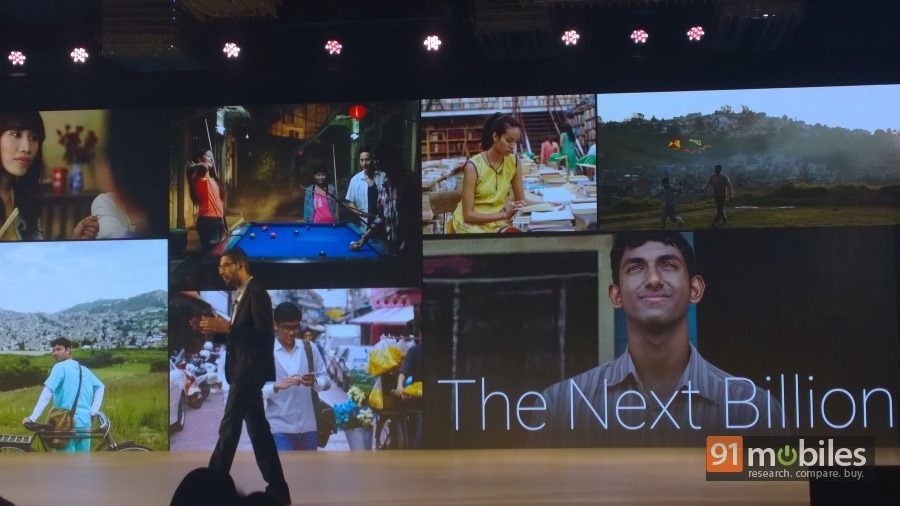 The few months between the Android One announcement and the actual availability of devices have seen the Indian smartphone market change drastically though, with quite a few compelling options appearing in the sub-Rs 8,000 segment. This has diluted the original premise to some extent, but that doesn’t take away anything from the fact that the Android One handsets form extremely strong and noteworthy options available to buy in case you don’t want to hurt your wallet much. We’ve been using the Karbonn Sparkle V as our daily driver since the day of launch, and it’s now time to separate the wheat from the chaff and evaluate whether it lives up to the promise or not. 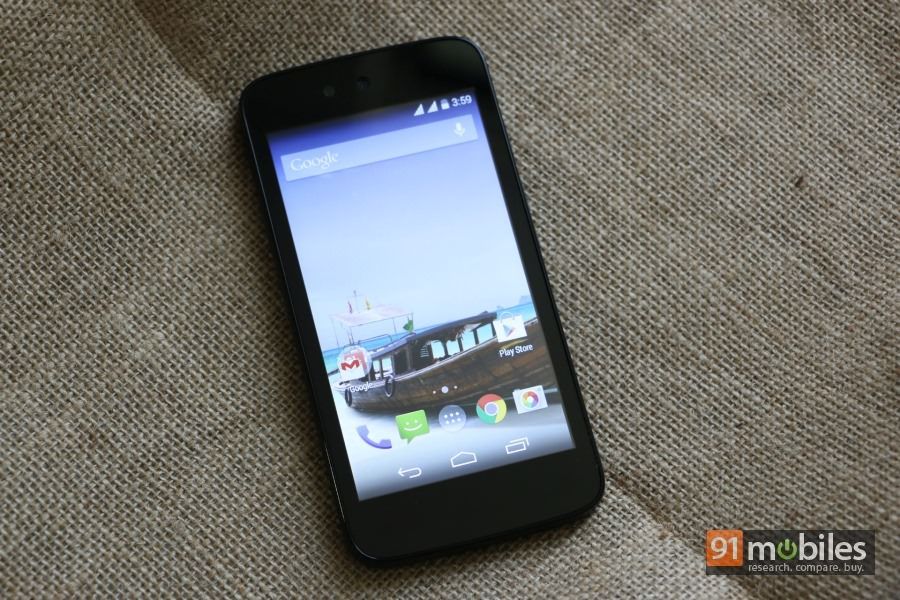 Out of the three devices in the Android One line-up, the Karbonn Sparkle V offers the most choice in terms of the colour options available. While the other two come in the usual white or black, the Sparkle V is offered in multiple hues including bright red. 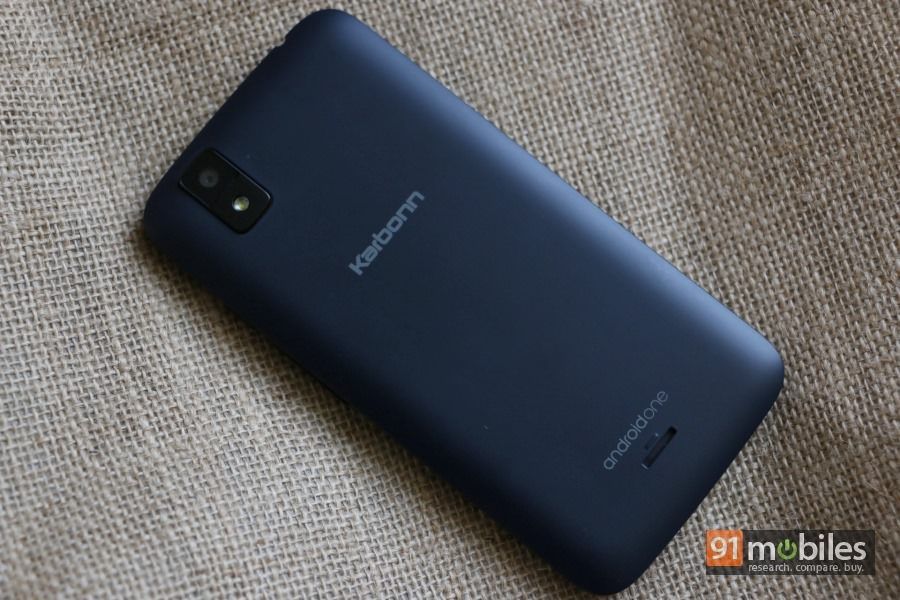 Our review unit is dark blue, though  it looks closer to grey. It’s not going to dazzle anyone with its looks, and appears rather plain. Compact in size thanks to its 4.5-inch display, it sports good build quality and doesn’t feel cheap despite the plastic construction. A black bezel surrounds the display, and you won’t find any hardware buttons on the fascia. 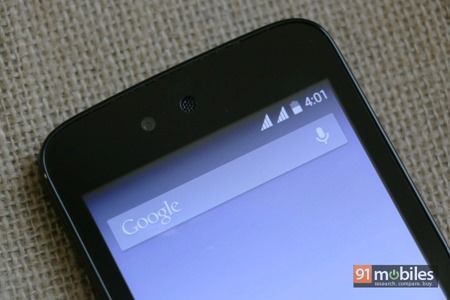 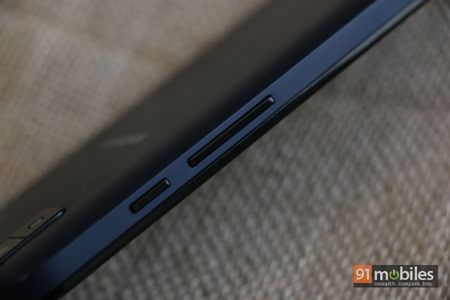 The top of the screen is home to a tiny notification LED, the front snapper, and the usual set of sensors, along with a circular earpiece that looks very similar to the one on the Google Nexus 5. The headset socket is on the top, where it should be, and the micro-USB port at the bottom. The right spine is where the power button and volume rocker are located. 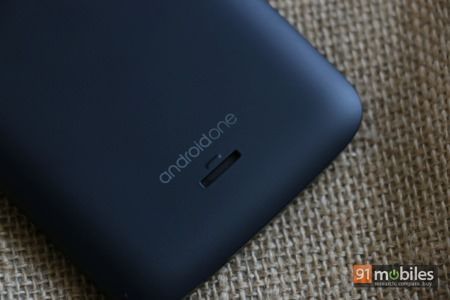 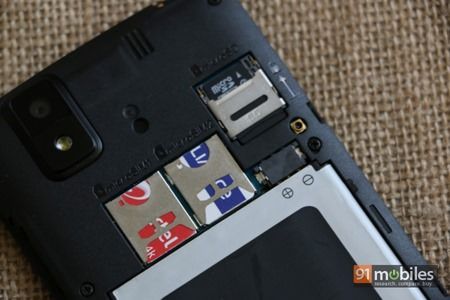 At the rear, you’ll see Karbonn and Android One branding, with the primary camera and flash located up top, and the speaker placed below. Opening the shell-like rear panel reveals the user-replaceable battery, a pair of micro-SIM slots and a microSD card slot.

It’s clear that you won’t be drawing any second looks whilst using the Karbonn Sparkle V… not unless you opt for the one in red. That said, good build could be more important for many budget buyers, and that’s where the device doesn’t disappoint.

A display that gets the job done

A 4.5-inch display with a resolution of 854 x 480 pixels is on offer, and while that doesn’t really make us go weak in the knees with excitement, it’s not too bad either. We won’t say we haven’t seen anything better in the same price range, but the Sparkle V’s display offers reasonably good colours and viewing angles. 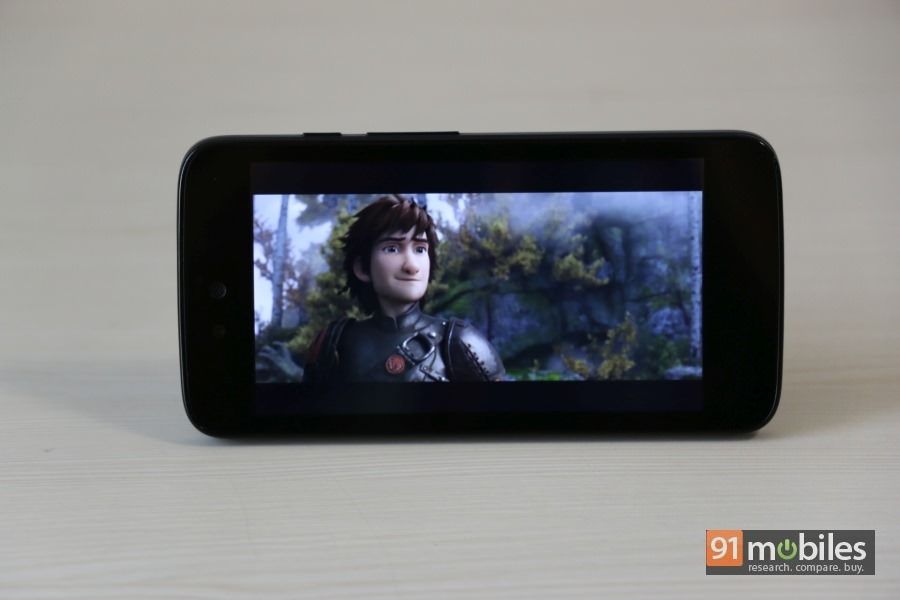 There’s no Gorilla Glass protection either, and that’s one area where close rival Moto E shines. Sunlight legibility is average too, and while we’d have definitely preferred higher resolution, the text and graphics look fine, without too much pixelation to mar the experience.

It’s its raison d’être. The Karbonn Sparkle V (along with the other two Android One handsets and the Nexus range), runs the purest, cleanest form of Android there is. Not only that, it’s updated to the very latest Mountain View has to offer, with Google guaranteeing that these devices will always have the latest build (at least for the next couple of years anyway), and be first in line to get the refreshes. That’s a very strong statement, not just for Android aficionados, but also for those who’re aware what all even an iterative update from Google can bring to the table. And we already know that the next Android refresh is going to be a biggie. With the possible exception of Motorola, only Google’s Nexus and Android One range can promise this as of now, and in our eyes, this is what makes the devices so compelling. 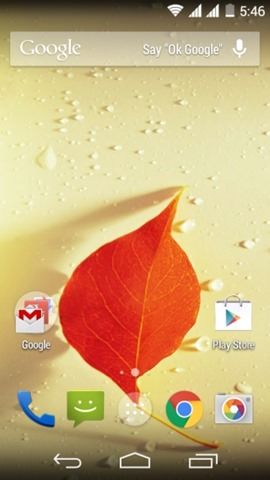 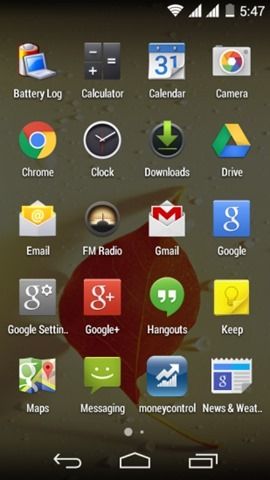 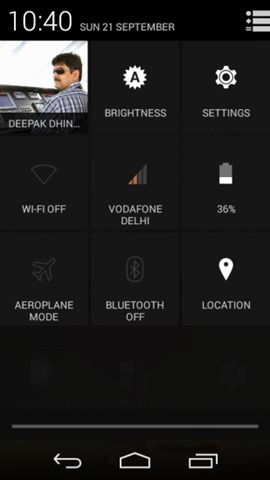 So Android in its birthday suit is what you get, complete with the Google Now launcher that uses software-based navigation keys and reserves a dedicated home screen on the leftmost side for displaying its cards. It’s ironic that we deem the software platform as the device’s mainstay, yet don’t really have much to discuss about the UI or the features – it’s just so clean and virginal, so to say. 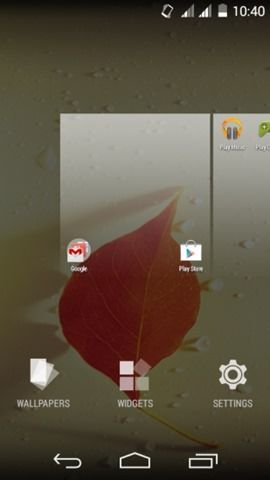 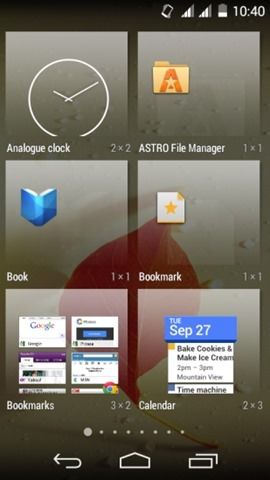 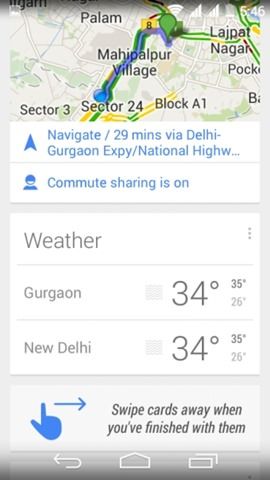 Also worth adding that the Google experience, be it with voice-based searches using the ‘ok Google’ hotword, or the functionality of Google Now and all the other apps which are part of the suite, is unmatched and without any flaws.

A 5-meg autofocus shooter aided by an LED flash is present when you want to capture special moments, while a 2MP front camera handles video calls. Again, there’s nothing here to excite us in terms of specs or capabilities, and as it turned out, we were glad we didn’t keep out hopes too high. 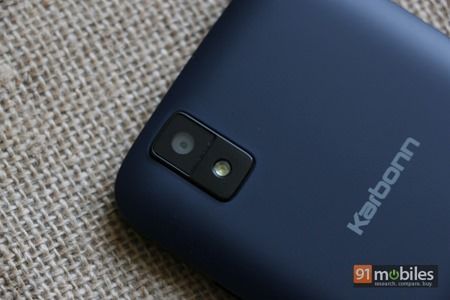 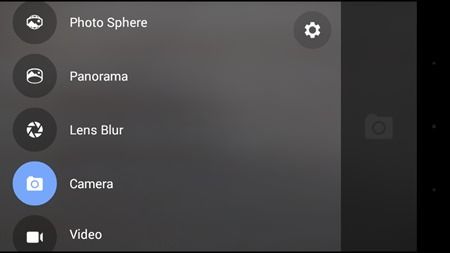 The Google Camera app acts as the front-end, offering a clean UI which is reasonably loaded with features. Of course, the app is available as a free download for all KitKat devices via the Play Store, and offers features such as Lens Blur, panorama and 360-degree Photo Sphere. You can shoot videos in full HD (720p using the front camera) too.

When it comes to image quality, we can say that the pair of shooters do their jobs – with the rear camera offering reasonable images as long as the lighting is good, and the secondary camera helping in video calls. The images are good enough for social sharing, but nothing more – don’t expect to create photographic masterpieces out of them. Here are a few full-resolution image samples taken using the primary camera. 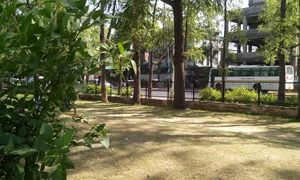 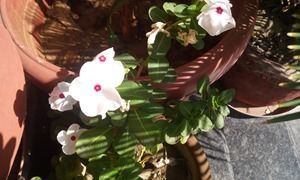 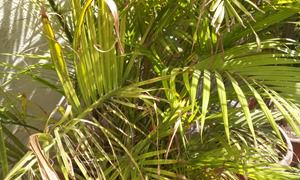 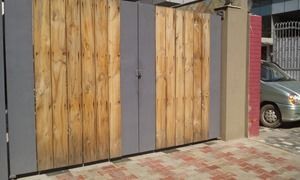 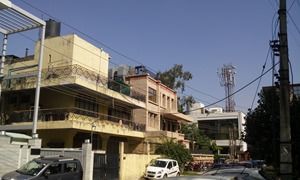 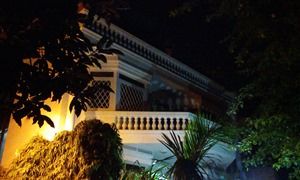 Runs smoothly with nary a hiccup

The horsepower is provided by a 1.3GHz quad-core MediaTek chip, with 1GB of RAM in along for the ride. This combo is good enough for most tasks and apps, and the seemingly lightweight stock UI flies on it. There’s hardly any evidence of lag, and routine tasks run quite well. 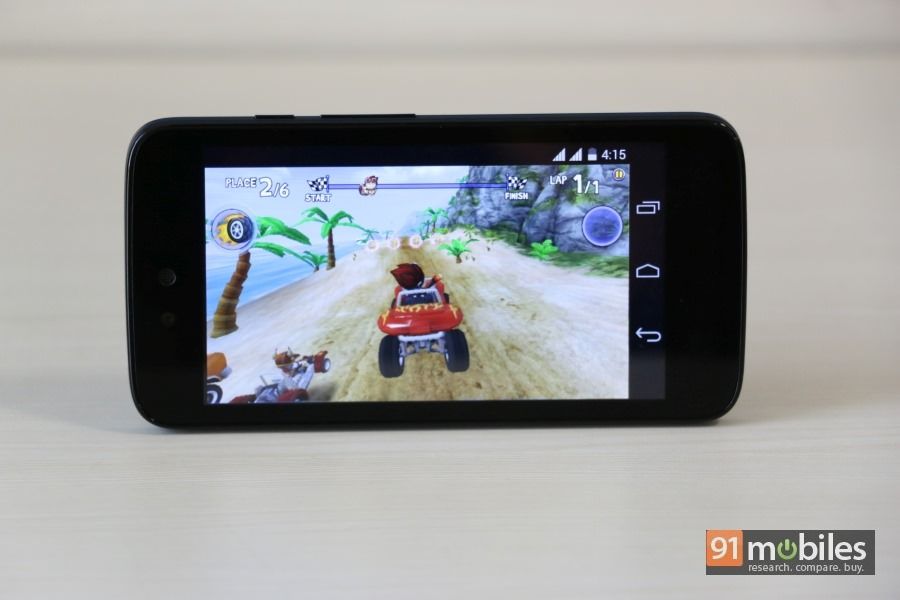 We didn’t really face any significant hiccups running graphics-heavy games like Riptide GP2 as well, even though the experience wasn’t butter smooth. 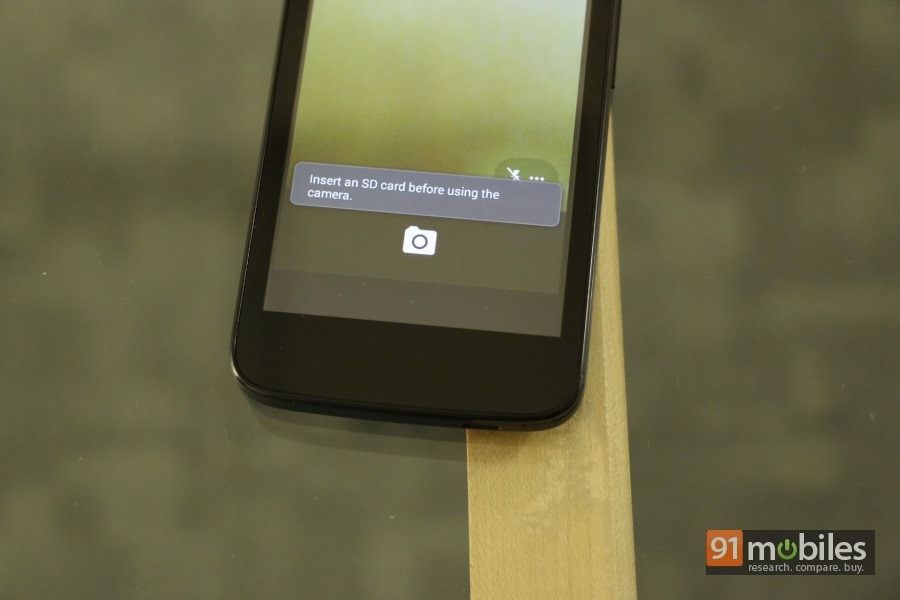 Out of the 4GB internal storage, about half is available to use, and you can add up to 32GB more by way of microSD. The lack of USB OTG support is disappointing, and for some reason, access to internal storage has been reserved only for installation of apps and games, and a microSD card is required for all other files, including media. This means that you can’t even perform basic tasks like capturing screenshots or shooting images using the camera without a memory card inserted, and that’s a huge limitation. Vendors like Micromax are attempting to circumvent that by bundling free microSD cards with their Android One smartphones, but it just seems weird that one can’t pull out a new device out from the box and start clicking pictures right away. Makes us want to say the same thing a wise man (by the name of Russell Peters) said, “somebody gonna get a hurt real bad”. Cheesy and irrelevant statements notwithstanding, it sure is a big bummer.

There aren’t any other surprises as far as connectivity is concerned, and you get the usual options such as Wi-Fi, Wi-Fi hotspot, Bluetooth, A-GPS and display mirroring via cast screen. 3G is available only on the first SIM slot, and that’s par for the course as well. 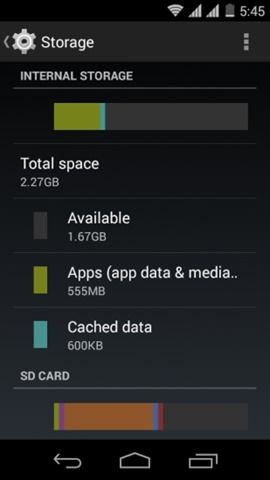 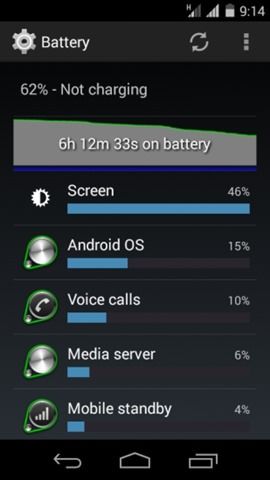 The 1,700mAh removable battery ensures the device doesn’t need to be given mouth-to-mouth till the day is over, provided your usage is within reasonable levels. With both SIMs inserted and connected to cellular networks (but no data or Wi-Fi), our video loop test ran for about six and a half hours before the battery put up its legs and died.

The Karbonn Sparkle V has a lot resting on its shoulders, and so do its other partners in crime. Entrusted with taking Google’s legacy in its purest form to the masses and getting them hooked on to the world wide web, the current Android One line-up is just the tip of the iceberg, and there’s lots more in the pipeline. There are more hardware partners in the fray now, including big names like HTC, Lenovo and ASUS, and the program is heading to more countries. Even the existing brands are planning to come with Android One version 2 devices, and clearly, there’s a lot at stake here. When looked upon spec-by-spec and feature-by-feature, the current trio of Android One devices are far from being perfect, and don’t really give us goose bumps with their specs or prices. However, we need to look at the bigger picture here. 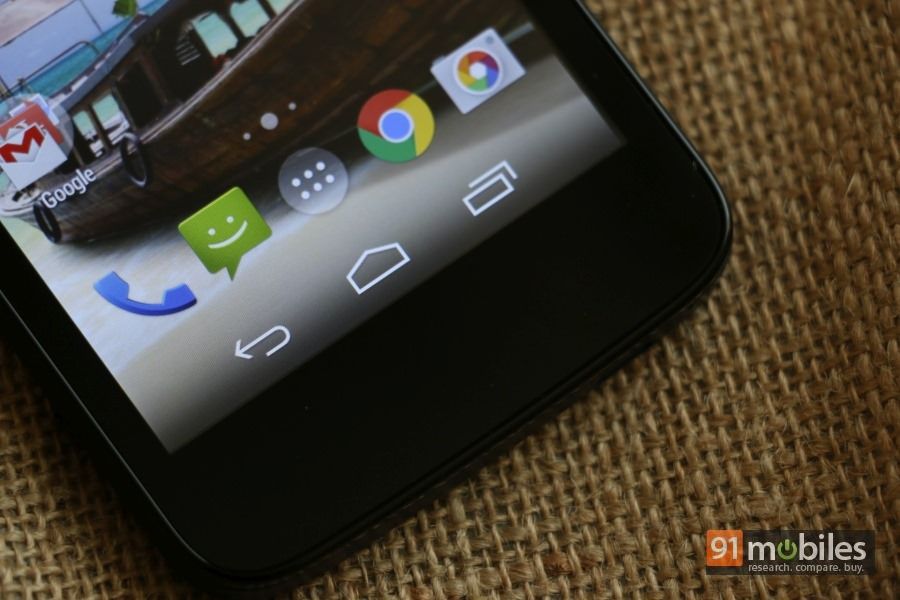 The Xiaomi Redmi 1s (review) is the one to beat in this price range, but the brand’s devices have always managed to buck the trend in terms of value for money. The Redmi 1s is a different beast altogether then, going on a different trajectory with its powerful specs and MIUI platform. It doesn’t help that it’s quite difficult to get hold of. Then there are others such as the ASUS Zenfone 4 (review) and the Micromax Unite 2 (review) that also make extremely worthy options in case you’re on the hunt for a daily driver and don’t want to sell your kidney. The Moto E (review) however, is the closest when it comes to the concept and ideology of the Android One initiative. With solid build quality (boosted further with use of Corning Gorilla Glass and a water-repellent nano coating), the latest Android version, and Motorola’s promise of timely updates makes the Moto E an unacknowledged and born-out-of-wedlock sibling of the Android One range. The lack of a front camera and a flash for the rear shooter do weaken its stand though. It won’t really be an exaggeration when we say that if you’re enticed with what the latest version of Google’s mobile OS to offer and don’t want to spend a bomb, the Android One range, including the Karbonn Sparkle V, is your best bet right now.

Photos and video by Pratik Vyas