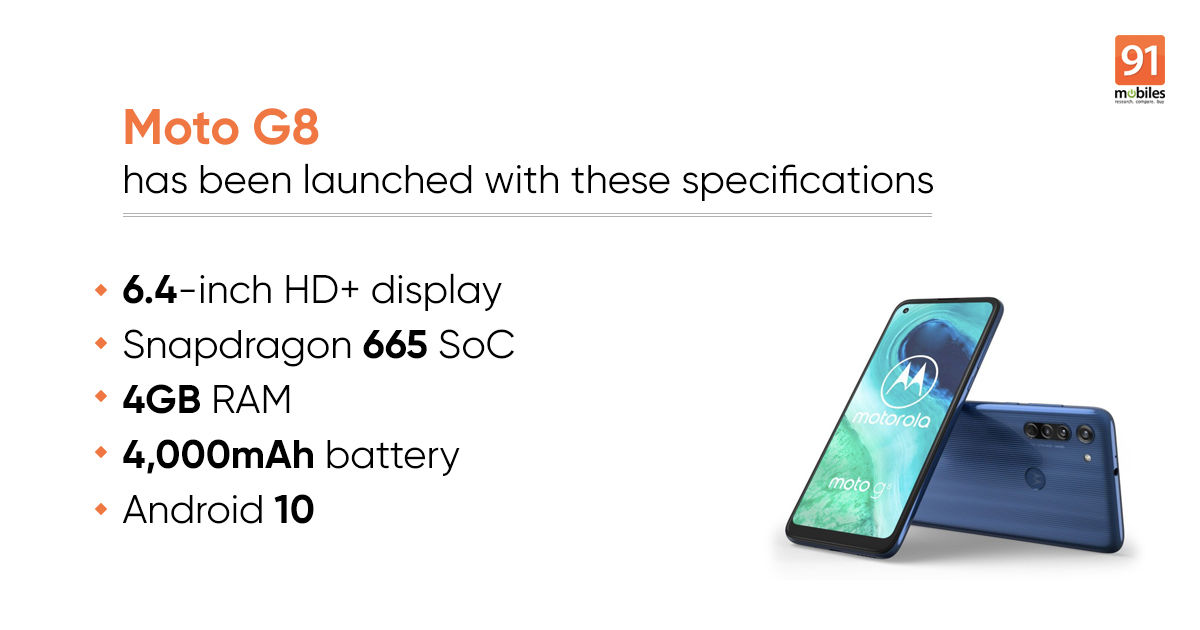 The vanilla Moto G8 smartphone has been launched finally, months after the G8 series went official with the release of eighth-gen G series. The all-new Moto G8 is a mid-range handset, offering an HD+ panel and a Snapdragon 6-series chipset. The device comes with triple rear camera setup and additional laser autofocus. The design of the device falls in line with the exclusive renders that 91mobiles reported back in January 2020. Motorola has currently introduced the Moto G8 device in Brazil and the UK. The device will soon reach the rest of Latin America, Asia, Europe, and Australia. Let’s take a look at the Moto G8 price, specifications, and key features.

The Moto G8 price in Brazil is BRL 1,143 (about Rs 18,300). In the UK, the device will sell for £180 (around Rs 17,000) and interested buyers can get their hands on the device via John Lewis, Argos, and Amazon. For now, the company has not given a tentative date on the arrival of the Moto G8 in the remaining parts of the world.

As for the specs, Moto G8 flaunts a 6.4-inch HD+ display, with room for a single punch-hole cutout, which is located in the top left corner. There is an 8MP selfie snapper embedded underneath the punch-hole. Moving around to the back, the Moto G8 features a triple rear camera setup, which is vertically aligned. The sensors include a 16MP primary lens, an 8MP ultra-wide-angle camera, and a 2MP macro lens. There is an additional module that houses a Laser Autofocus system. One can shoot 4K videos at 30 frames per second with the Moto G8 smartphone. Other than the camera module, the Moto G8 has a physical fingerprint scanner at the back, which is embedded underneath the Motorola logo.

Under the hood, the Moto G8 comes equipped with a Qualcomm Snapdragon 665 chipset, an Adreno 600-series GPU, 4GB of RAM, and 64GB of onboard storage. The internal storage can be expanded further with the help of an external SD card (up to 512GB). Note that the Moto G8 comes with a hybrid SIM card solution. A 4,000mAh battery keeps the lights on and can be charged with up to 10W charging speed. Thankfully enough, the Moto G8 sports a USB Type-C charging port and also has a 3.5mm headphone jack.