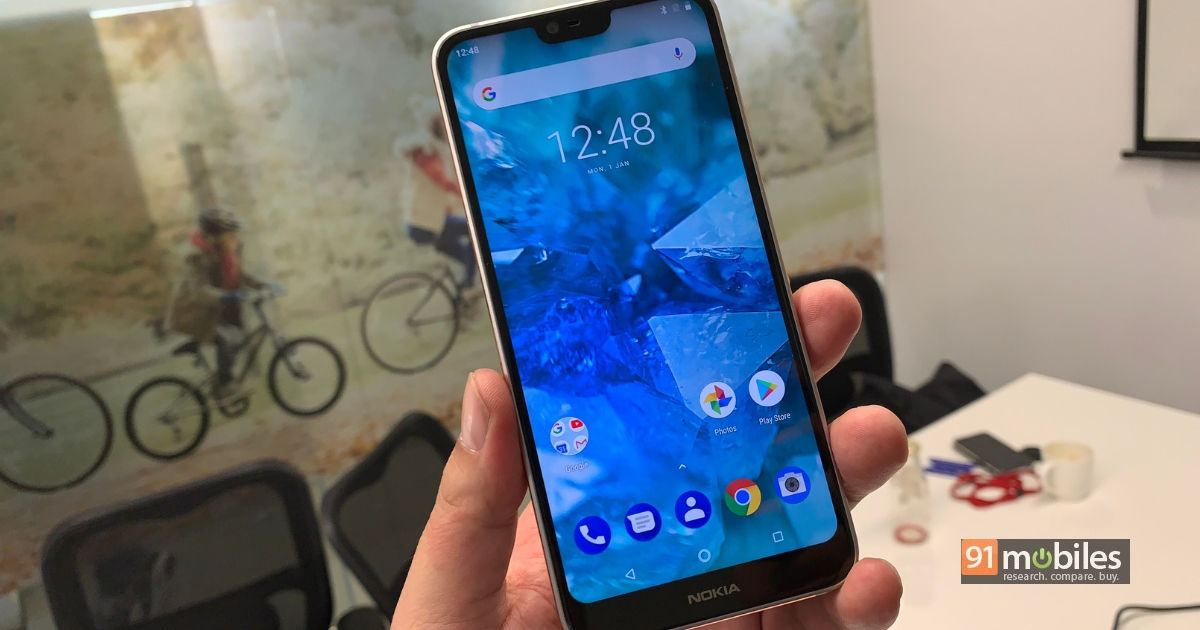 “The Nokia 7.1 stands out as the first phone in the affordable segment to boast an HDR display”

Brand Nokia, under the aegis of HMD Global, is churning out smartphone after smartphone, and in the process, giving a much-needed fillip to Google’s Android One platform. Not that we’re complaining. The latest from the company comes in the form of the Nokia 7.1, which is basically a successor to the Nokia 7 that launched in China a year ago. Slotted between the Nokia 6.1 Plus (review) and the 7 Plus (review), the new Nokia 7.1 actually shares quite a few specs with the former, but boasts a few interesting new features. And the HDR10-capable display is right on the top of that list. Before we get ahead of ourselves though, let’s take a closer look. 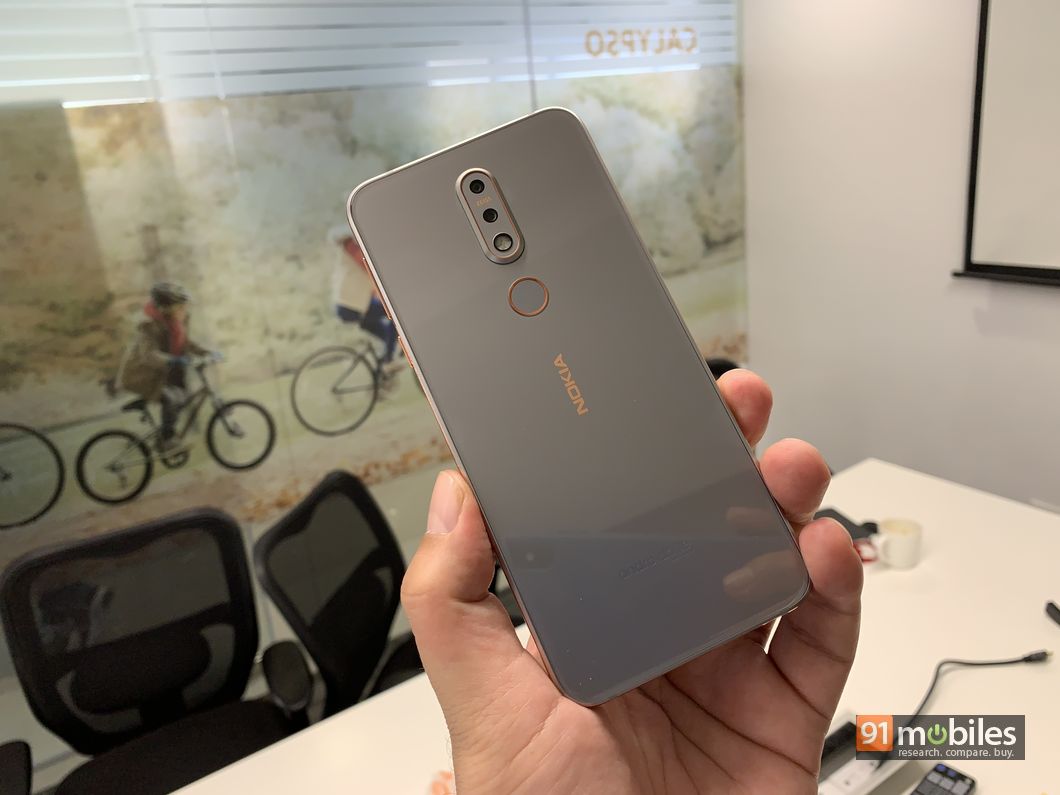 Nokia phones are renowned for their build quality, and the 7.1 takes that up several notches. The glass sandwich design with a series 6000 aluminium frame makes it feel very solid in the hand, but its accentuated details and diamond-cut chamfers lend a really premium feel. No two ways about it – the device feels flagship-grade as far as the build quality and design are concerned, and while the Gloss Blue shade (which is so dark that it almost looks black) is subtle, it’s the Gloss Steel variant that stands out with its copper accents. 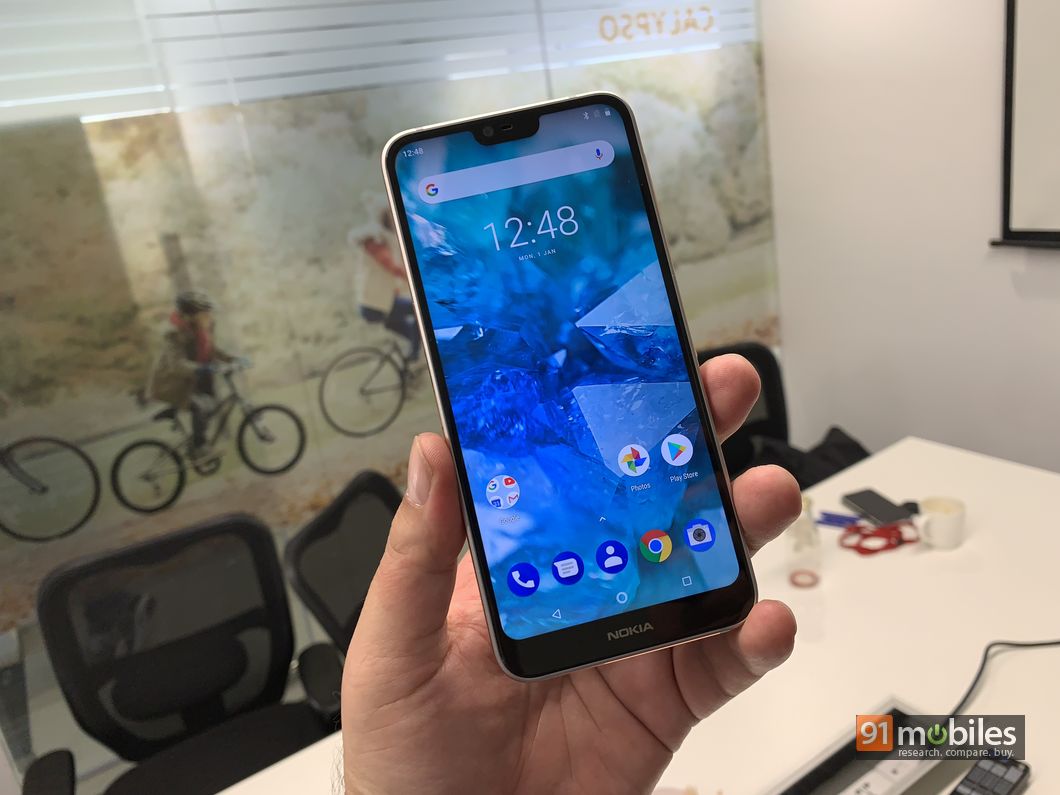 Thanks to the 5.84-inch display that bears an aspect ratio of 19:9 and a notch on top, the overall size of the phone is quite compact. There’s a small chin below the screen which bears Nokia branding, but otherwise the bezels are quite slim. The left spine is home to the hybrid SIM slot, while the right is where you’ll find the accentuated volume rocker and power key.

At the rear, you’ll see the vertically-aligned dual snappers, placed in the centre. Below the camera module sits the circular fingerprint scanner. You’ll also find Nokia and Android One branding here. The 3.5mm headset socket is on top, while the USB Type-C port and the speaker are placed at the bottom. 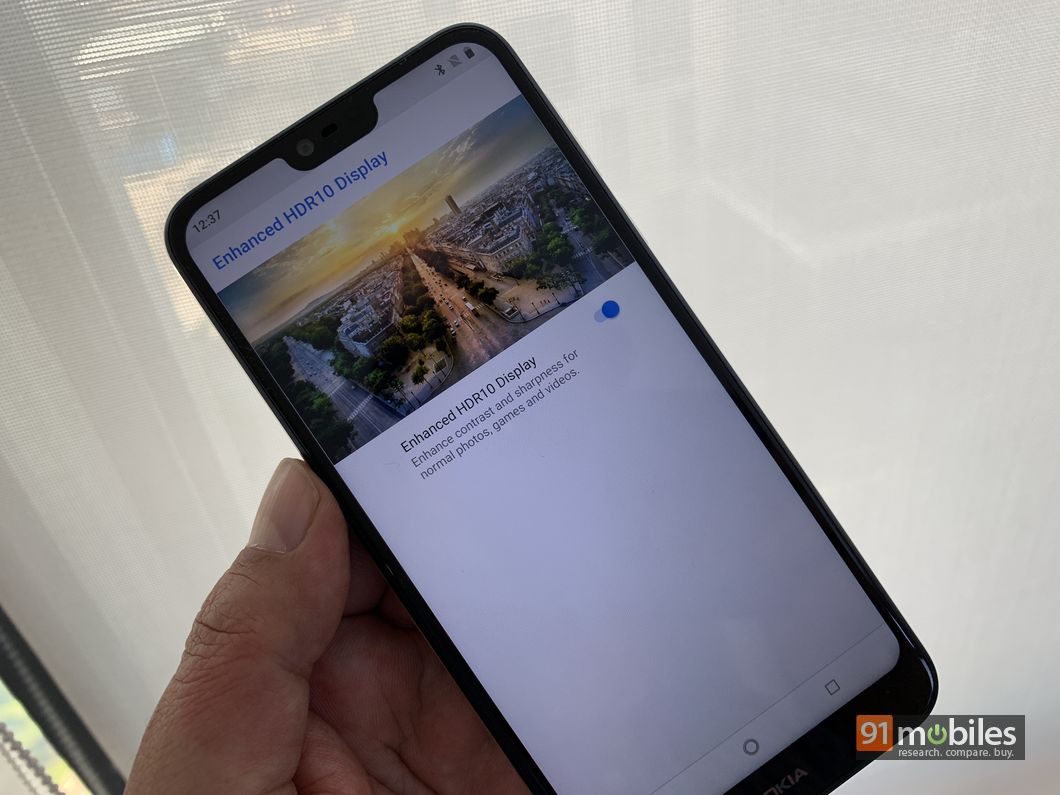 The Nokia 7.1 marks the debut of the brand’s new PureDisplay screen tech. As per Nokia, the key reason behind introducing this tech is the fact that over two thirds of videos are viewed on the mobile, and it wants to make sure its users can get the best experience. The FHD+ screen on the device supports HDR10 and while we’ve seen this on premium flagships from the likes of Apple, Samsung, LG and Sony, it’s the first time an HDR-capable screen will be available in the affordable smartphone segment. HDR videos is still hard to come by, but you can find content on Netflix and Amazon Prime. HDR support promises a very immersive experience while viewing supported videos, thanks to higher contrast and better dynamic range. In fact, Nokia’s PureDisplay tech even upscales non-HDR content in real time, which means that even SDR videos should show better dynamic range. While we couldn’t test it out during our brief time with the Nokia 7.1, the promise is certainly an enticing one, especially considering that the new smartphone should fall in the lower mid-range segment. 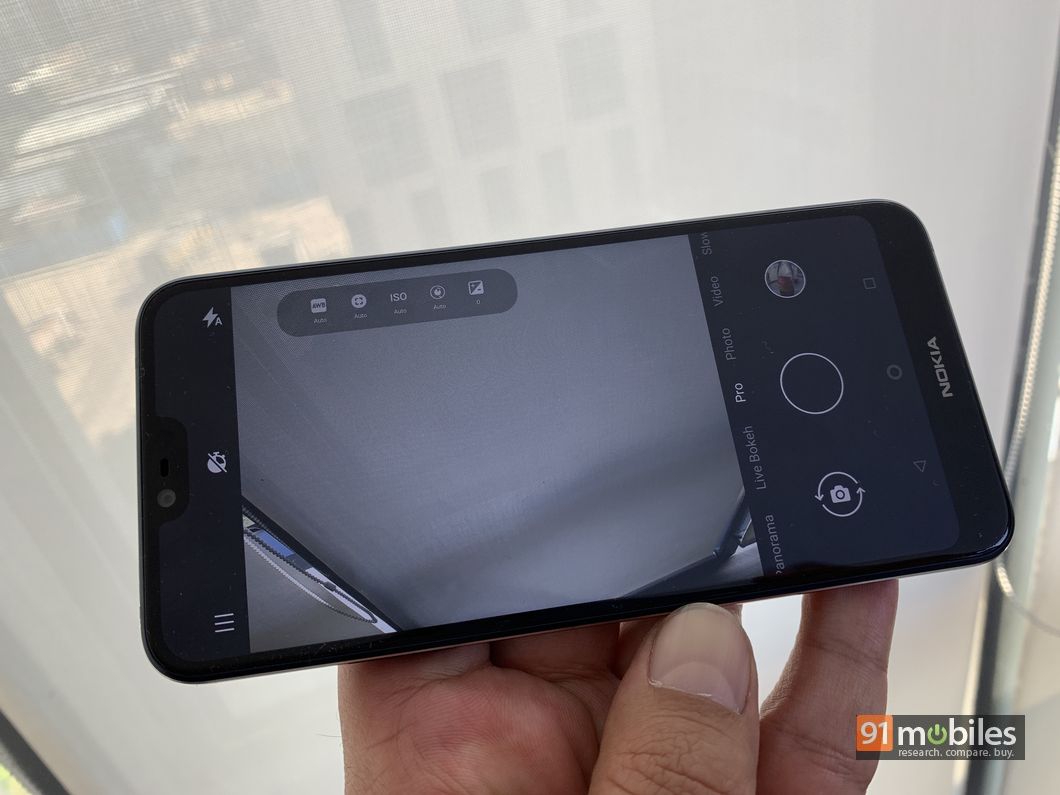 For photography, you get dual 12MP+5MP cameras with ZEISS optics, along with an 8MP snapper at front for selfies. The cameras allow for bokeh photography, and the custom Nokia camera app offers a ton of features, including a powerful Pro mode for granular control. The other available features include EIS for video shooting, 360-degree Nokia spatial audio and the signature Bothie mode that uses both the front and rear cameras to shoot split-screen videos and live stream to platforms like Facebook and YouTube. The Bothie mode has received an update that lets you drag the vertical divider to let you control how much you want to show via the front or the rear cameras, and even freeze one side of the frame if you want. 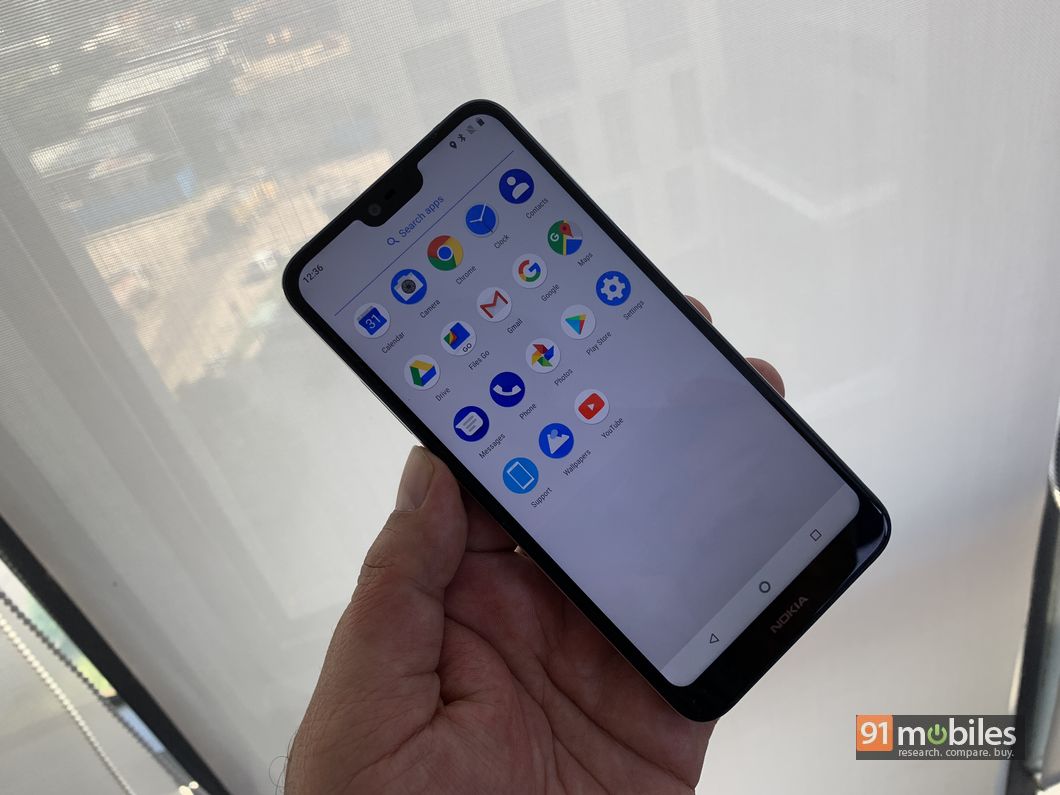 Software-wise, things remain pretty standard. The Android One platform on the Nokia 7.1 comes in the form of stock Android Oreo, with a promised upgrade to Pie by November. Inside sits Qualcomm’s Snapdragon 636 processor, which, frankly speaking, doesn’t seem like much of an upgrade, especially as compared to the Nokia 6.1 Plus that has the same SoC. However, going by our brief experience with the phone, the 7.1 seems snappy enough, and we didn’t face any stutter or lag. A 3,060mAh battery with fast charging support powers the show. 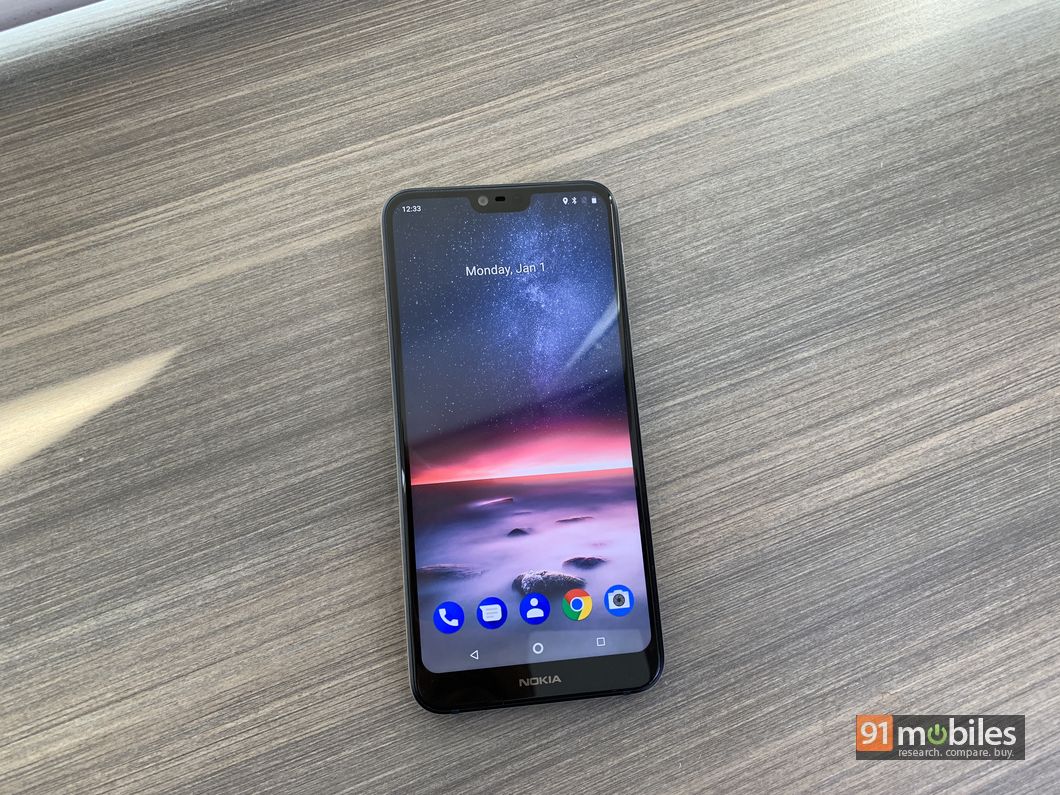 The starting price of the Nokia 7.1 has been pegged at €299 euros. This is for the 3/32 variant, though a 4/64 model should also be in the offing. The pricing does seem pretty high, but we’re hoping that HMD Global would be able to price it much more aggressively when the device lands in India. No timeframe for that yet, so we’ll wait and see how things play out, and how much of a differentiator that HDR-capable display turns out to be. We’re quite eager to run the Nokia 7.1 through our review grind and see if it can deliver in terms of imaging prowess and as a daily driver…