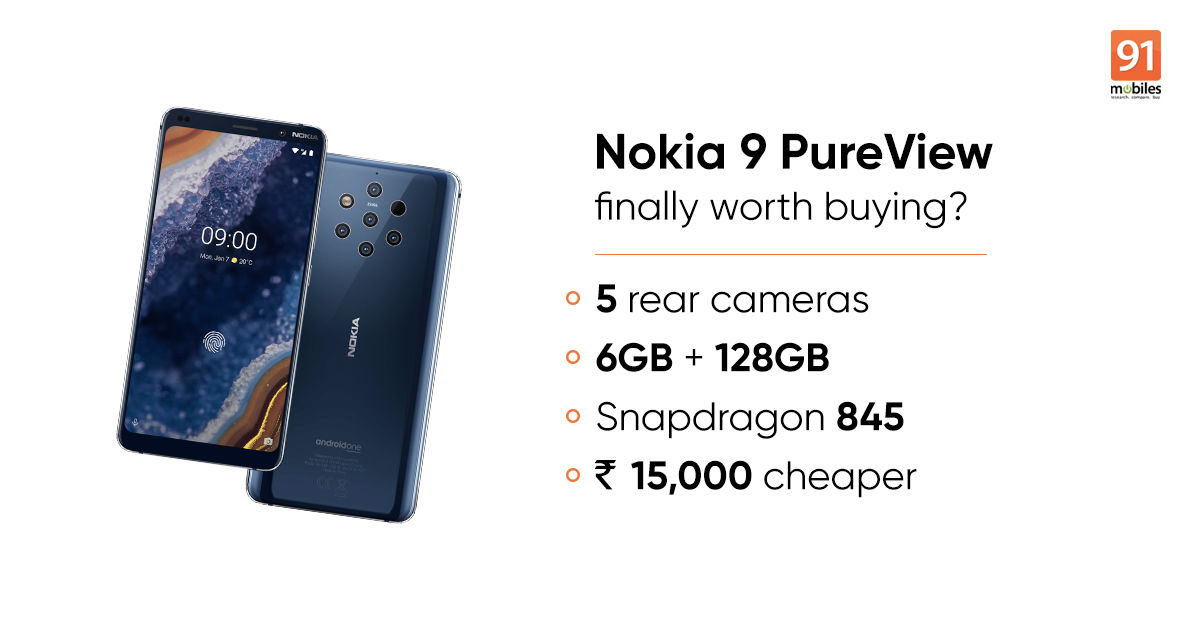 Nokia 9 PureView was launched in India back in July 2019 at Rs 49,999, which was considered to be on the costlier side. Now, the Nokia 9 PureView price in India has been cut by Rs 15,000 officially by HMD Global in the country. With this, the handset is available at Rs 34,999, and the new pricing is already applicable on Flipkart and the Nokia website. The phone received the Android 10 update back in December. As for the key specifications, the Nokia 9 PureView packs Penta camera setup at the back, ships Qualcomm Snapdragon 845 SoC, and packs an in-display fingerprint sensor for security.

Why pay in full when you get EMIs with 0% interest?
Buy the Nokia 9 PureView now and pay later in flexible EMIs!
Know More

To recall the specifications, Nokia 9 PureView flaunts a 5.99-inch QHD+ pOLED PureDisplay with an aspect ratio of 18:9, Corning Gorilla Glass 5, and HDR10 support. It is powered by the Qualcomm Snapdragon 845 SoC coupled with Adreno 630 GPU and packs 6GB of RAM and 128GB internal storage. The phone runs on Android 10 OS with the stock Android interface. It measures 155 x 75 x 8 mm and weighs 172 grams.

As for the optics, the Nokia 9 PureView packs a penta-lens setup consisting of dual 12MP RGB sensors and three 12MP monochrome lenses. All the sensors have f/1.8 aperture and autofocus. There is a 20MP shooter on the front for selfies and video chats. There is an optical in-display fingerprint sensor for security and a 3,320mAh battery with wireless and fast-charging support. Connectivity options include Dual 4G VoLTE, dual-band Wi-Fi 802.11ac, Bluetooth 5, GPS/ GLONASS, and USB Type-C.