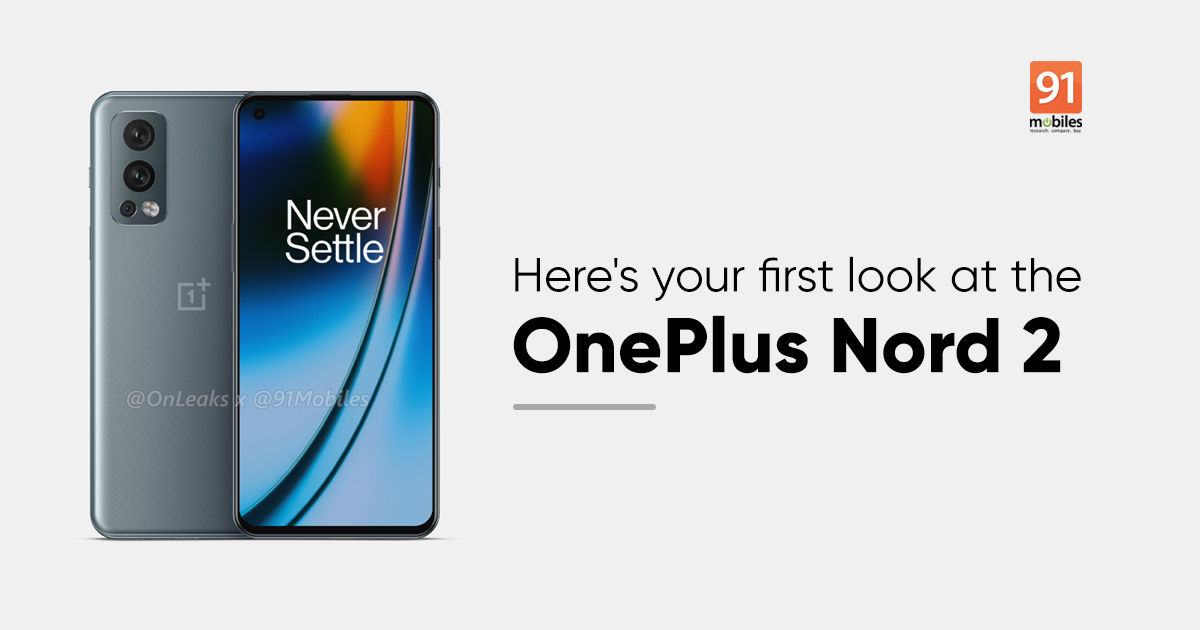 OnePlus Nord 2 launch is expected in July as the phone has been doing rounds of the internet for quite some time. The phone had recently appeared on the AI benchmark platform, with the listing revealing some of its internal hardware. Now, After exclusively revealing the OnePlus Nord 2 specifications earlier this month, 91mobiles brings you the OnePlus Nord 2 renders of the phone in association with industry insider Steve Hemmerstoffer aka Onleaks. While these renders show off the entire design in full glory, they’ve been made based on early prototype CAD and, hence, slight design changes are expected in the final product. However, considering the accuracy of leaks by OnLeaks in the past, we can be pretty confident this would be the final design.

The OnePlus Nord 2 design looks heavily inspired by the OnePlus 9 series. On the front, it has a punch-hole cutout for the selfie snapper and narrow bezels. The volume rocker is on the left, while the right side houses the power button and the alert slider. On the back, the OnePlus Nord 2 has a triple camera and an LED flash arranged in a rectangular module and a OnePlus logo. The phone can be seen in Green colour, but there could be other options at launch. The USB Type-C port, SIM tray, and speaker grille are at the bottom. However, there’s nothing on the top. The OnePlus Nord 2 is expected to measure 160 x 73.8 x 8.1mm (roughly) in dimensions.

OnePlus Nord 2 specifications could include a 6.43-inch FHD+ AMOLED display with a 90Hz refresh rate and probably an in-display fingerprint sensor for security. The phone is expected to be powered by the MediaTek Dimensity 1200 SoC coupled with up to 12GB RAM and 256GB storage that may not be expandable.

It is said to have triple cameras on the back, with a 50MP primary sensor, an 8MP secondary lens, and a 2MP sensor. The phone is said to get a 32MP snapper on the front for selfies and video chats and pack a 4,500mAh battery that may get 30W or 65W fast-charging support. It is likely to boot Android 11 OS out of the box and connectivity options could include 5G, 4G LTE, dual-band Wi-Fi, Bluetooth, GPS, and USB Type-C port.