After catering to the mid-range and upper mid-tier price bands with the launch of the K1 (first impressions), and F11 Pro (review), it seems that OPPO is all set to strengthen its position in the sub-Rs 10k segment. After officially announcing that it’ll be launching the A5s in the country next week – which 91mobiles has learnt from sources would carry a price tag of Rs 9,990 – we’ve now got to know that the Chinese phonemaker has another smartphone in the works for the subcontinent. Dubbed the OPPO A1k, the handset is set to arrive in India soon. 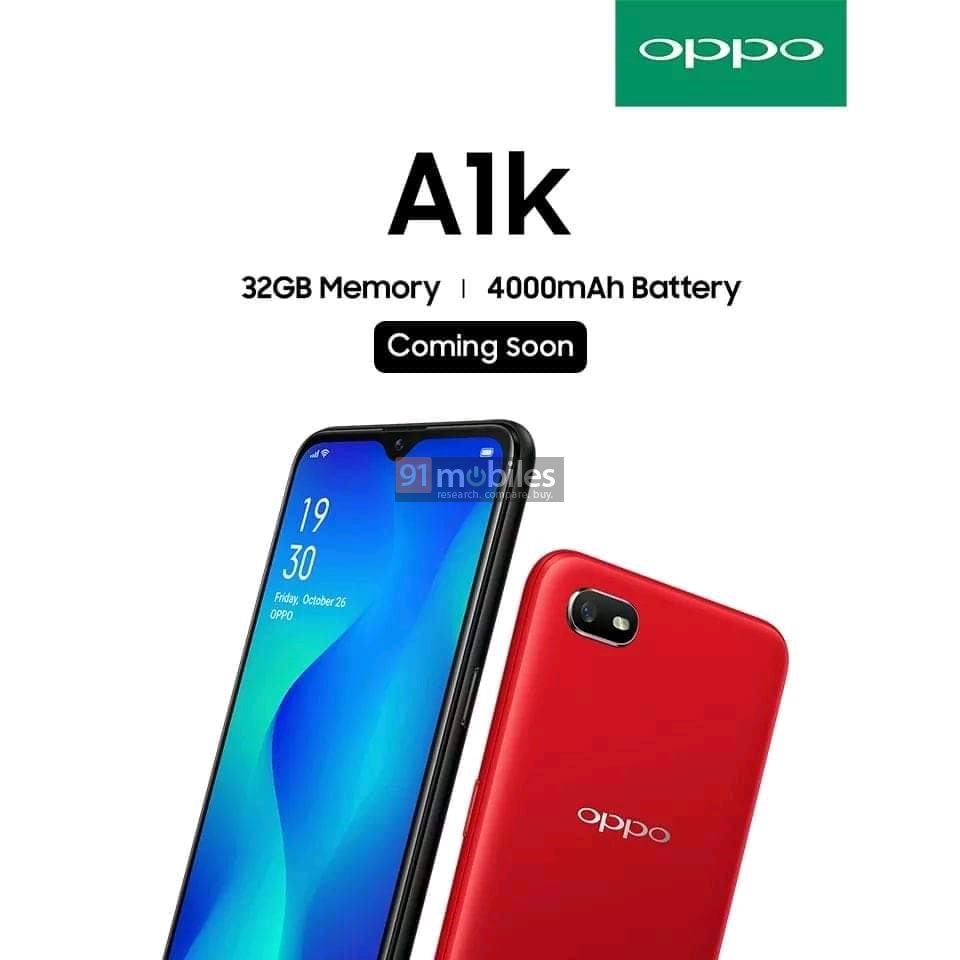 As per the poster which we’ve acquired from a retail chain source, the OPPO A1k will ship with a beefy 4,000mAh battery. The teaser image also reveals that the handset will come with 32GB of memory onboard. We can also confirm from the phone’s renders that the device will be yet another budget offering with a small, dewdrop-shaped notch to house the selfie snapper, whereas at the back, the A1k will sport a single sensor. The rear camera is accompanied by a dual-tone LED flash. The fingerprint sensor also seems to be amiss, which suggests that the A1k would rely on the face unlock tech for authenticating the user.

The OPPO A1k hasn’t gone official yet, which means that the smartphone might make its global debut in India when it launches. Sadly, our source wasn’t able to ascertain any other information about the forthcoming device. As per the NBTC certification, the A1k is expected to feature a display measuring 6-inches or more. Powering the show would be MediaTek’s Helio P22 SoC, which will be paired with 2GB of RAM. The listing also reveals that the phone’s dimensions are 154.4 x 77.4 x 8.4mm. The device tips the scales at 165 grams. The certification mentions that the device will be available in red and black hues, which corroborates with the render in the poster above.

Considering that the OPPO A5s is a sub-Rs 10,000 smartphone, we can expect the A1k to be priced even lower, perhaps around Rs 8,000 to target the consumers who are moving from their first smartphone in the entry-level segment. We will certainly be on the look out to tell you as and when the smartphone launches, so stay tuned.