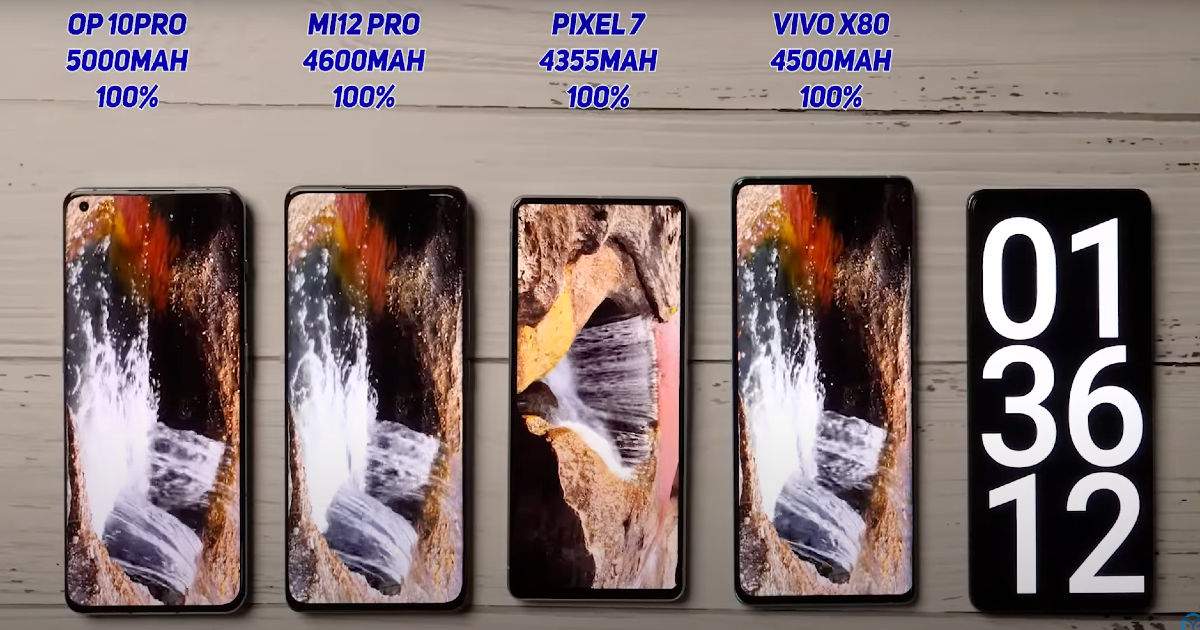 Flagship phones are all about premium user experience aided by premium hardware and software experiences. When it comes to flagships, we usually discuss the chipset on board that will offer lag-free performance, superior camera experiences, immersive display and sound experience. While battery life and charging speeds are equally important, they are usually given somewhat less importance, for example, the Samsung S-series and Apple iPhones. Pixel 7 vs OnePlus 10 Pro, Xiaomi 12 Pro, and Vivo X80 are the latest flagship phones in the Android world.

Folks at MySmartPrice did battery drain and charging tests on these smartphones, with each device set at a maximum brightness level and performance modes. Here are the results but before that we bring you a table with each phone’s battery capacities.

The battery drain test starts with video playback and speaker tests for two hours. At the 2-hour mark, the Xiaomi 12 Pro consumed lesser battery compared to others. The battery of the phone dropped to 84 percent, while the OnePlus 10 Pro came in second by dropping to 83 percent. The Vivo X80 and Pixel 7 dropped to 79 and 78 percents, respectively. Do note the OnePlus 10 Pro has a 5000mAh battery, which is the highest among the list of phones put to test.

Moving ahead, the video then proceeds with benchmark scores. For some reason, the Pixel 7 doesn’t seem to have support for Geekbench 5 so the test skipped this and went ahead with AnTuTu benchmarking app. This showed that Pixel 7 was the least-scoring phone, while the Dimensity 9000-powered Vivo X80 was the highest. These tests took an hour and after three hours of usage in total, the Xiaomi 12 Pro and Pixel 7 retained the same 54 percent battery percentage, while the Vivo X80 is at 50 percent, the OnePlus 10 Pro dropped battery significantly and settled at 49 percent.

The flagship phones then went through a quick round of video recording tests for 30 minutes. At the end of the test, Xiaomi 12 Pro dropped to 23 percent, followed by Pixel 7, Vivo X80 and OnePlus 10 Pro at 21 percent and 18 percents, respectively.

Call of Duty: Modern Warfare 2 release date, India price, gameplay, and everything else you need to know

5G use cases: What are the use cases of 5G and why you can continue using 4G

Finally, the phones then spent two hours on social media. With 5 hours 58 minutes of screen time, the OnePlus 10 Pro stood in the last place, followed by Vivo X80 with a screen time of 6 hours and 5 minutes, the Xiaomi 12 Pro with 6 hours and 9 minutes and the Pixel 7 with 6 hours and 17 minutes. It is quite clear that Pixel 7 took the crown with the highest screen on time.

After all, phones died out, MySmartPrice video shows the phones were again put to quick charging test. The Xiaomi 12 Pro took just 35 minutes to charge completely, thanks to 120W fast charging support. This is followed by the OnePlus 10 Pro at just 42 minutes, courtesy of 80W charging speed. The Vivo X80 took around 58 minutes to charge completely, while the Pixel 7 took a whopping 1 hour and 52 minutes time to charge.