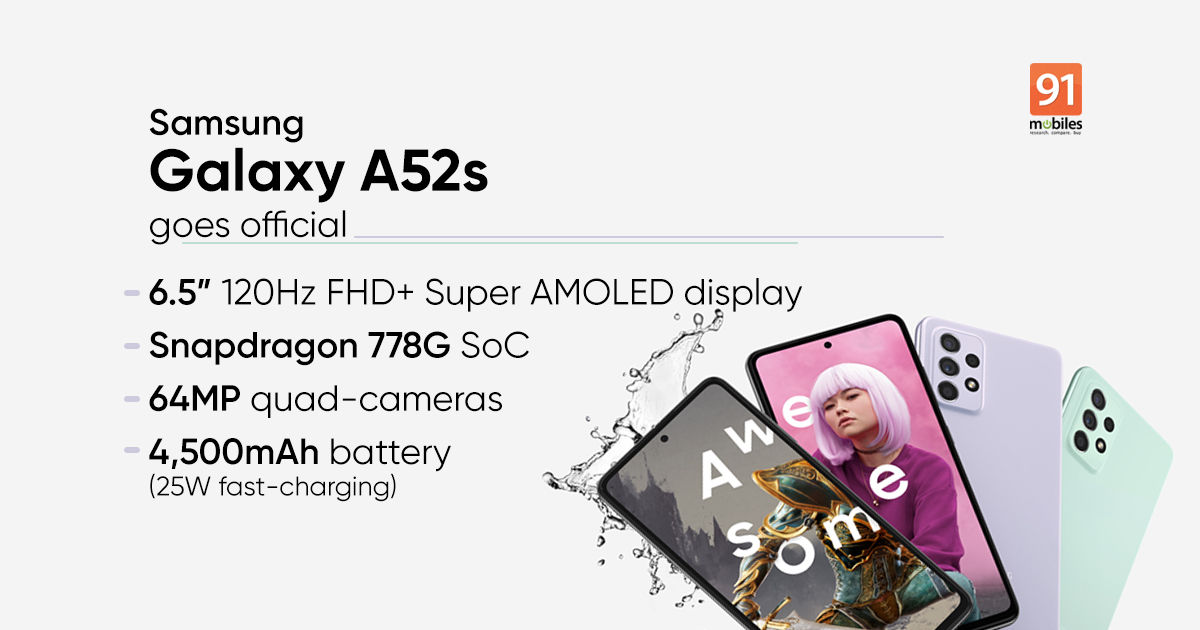 Samsung Galaxy A52s 5G has been launched officially after numerous leaks and reports. It is the company’s latest A-series phone and is almost identical to the standard Samsung Galaxy A52, except for the chipset. The phone has a punch-hole cutout for the selfie snapper, a 120Hz AMOLED screen, a rectangular camera module to house the triple cameras, and an in-display fingerprint sensor for security. Key Samsung Galaxy A52s specs include Snapdragon 778G chipset, 64MP primary camera, 25W fast-charging support, Android 11-based OneUI custom skin on top, and an IP67 rating for water-resistance.

Samsung Galaxy A52s 5G price is £409 (around Rs Rs. 41,900) for the 6GB/128GB version and it comes in Awesome White, Awesome Mint, Awesome Violet, and Awesome Black colours. The phone will be up for pre-orders in the UK from August 24th, with sales starting from September 3rd. The phone is also expected to launch in India as well.

The Samsung Galaxy A52s sports a 6.5-inch FHD+ Super AMOLED Infinity-O display with a 120Hz refresh rate, 2,400 X 1,080 pixels resolution, punch-hole display for the selfie snapper, and 800nits brightness. It is powered by the Qualcomm Snapdragon 778G SoC paired with Adreno 642L GPU, up to 8GB RAM, and 256GB internal storage that is further expandable via a microSD card up to 1TB. The phone runs on Android 11-based OneUI 3.1. custom skin out of the box and packs a 4,500mAh battery with 25W fast-charging support.

Moving to optics, the Samsung Galaxy A52 has a quad-camera setup at the back with a 64MP primary sensor with f/1.8 aperture and OIS, a 12MP ultra-wide-angle lens with f/2.2 aperture, a 5MP macro lens with f/2.2 aperture, and a 5MP depth sensor. There is a 32MP snapper on the front for selfies and video chats and an in-display fingerprint sensor for security. The phone is equipped with Dolby Atmos, Samsung Pay, an IP67 rating for water resistance, and stereo speakers. Connectivity features include 5G, 4G LTE, dual-band Wi-Fi, Bluetooth 5.0, NFC, GPS, and USB Type-C port. It measures 159.9×75.1×8.4mm and weighs 189 grams.