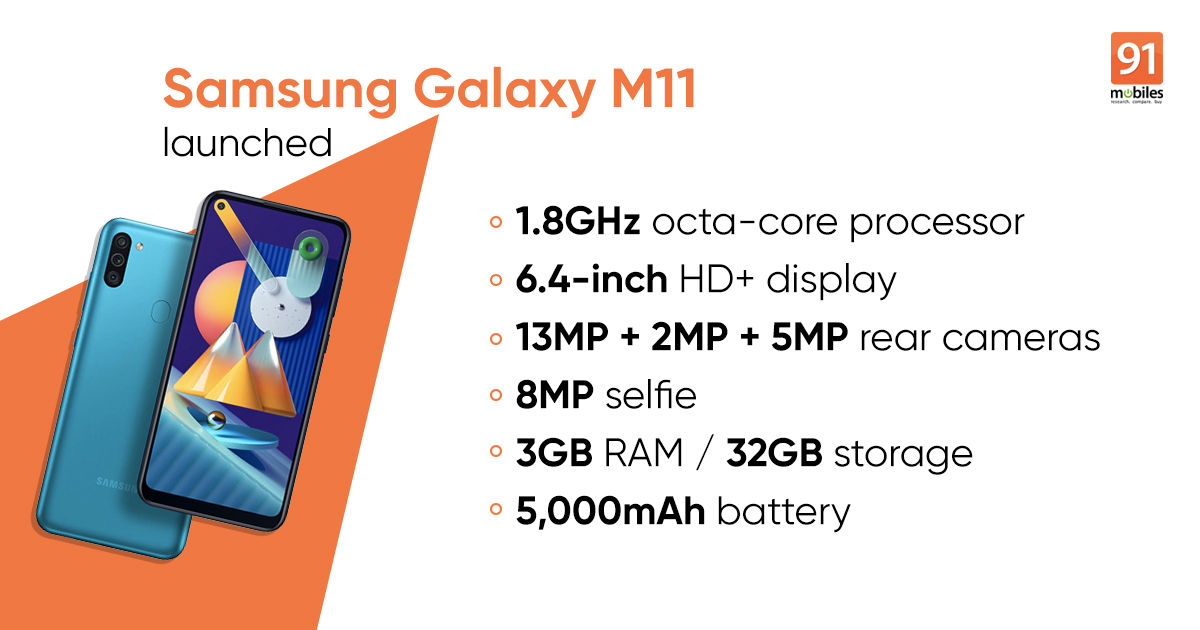 Samsung Galaxy M11 has been silently launched in the UAE after various leaks and reports and will succeed the Galaxy M10s from 2019. This is the newest smartphone under the Galaxy M series, and likely the most affordable phone in the lineup for 2020. The Galaxy M11 comes with a bunch of upgrades over its predecessor, most notably with regards to the display. The new smartphone now touts a punch-hole cutout at the top left corner to house for the selfie camera and a triple camera setup on the back. While the Galaxy M11 price is currently unknown, it is likely to be the cheapest phone with a punch-hole display. Key specifications also include a 6.4-inch HD+ display, 5,000mAh battery with fast-charging support and One UI out of the box.

The Samsung Galaxy M11 will be available in Black, Blue and Purple colour options. The South Korean giant hasn’t revealed the pricing or availability details just yet. The smartphone has been listed on the official Samsung UAE website, and we should know more about its pricing soon enough.

The Samsung Galaxy M11 sports a 6.4-inch HD+ TFT LCD display with a positioned punch-hole cutout at the top-left corner for the selfie camera and 1,560 x 720 pixels resolution. While the chipset name isn’t revealed, we know that it is a 1.8GHz octa-core processor that is powering the handset. It comes in two variants: 3GB + 32GB and 4GB + 64GB internal storage that is further expandable up to 512GB via a microSD card. The smartphone runs on Android OS, with software version likely to be the latest Android 10 with OneUI 2.0 custom skin.

As for the cameras, the Samsung Galaxy M11 features a triple-camera setup at the back consisting of a 13MP primary sensor, a 5MP ultra-wide-angle lens, and a 2MP depth sensor for portrait shots. There is an 8MP snapper on the front in the punch-hole cutout for selfies and video chats. Other Galaxy M11 specifications include a rear-mounted fingerprint sensor for security, a 5,000mAh battery and 15W fast-charging support. Connectivity features include 4G VoLTE, Wi-Fi 802.11, Bluetooth 4.2, and GPS + GLONASS. It measures 161.4 x 76.3 x 9.0mm and weighs 197 grams.
ShareTweetShare
Share