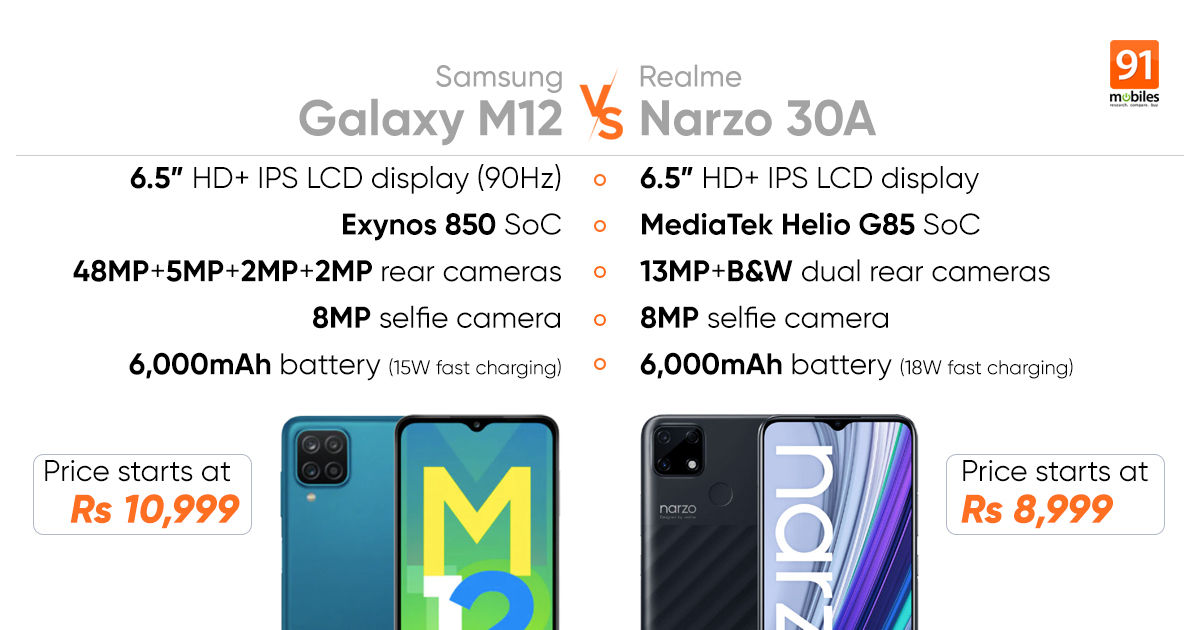 The Samsung Galaxy M12 launch in India earlier this week saw the entry of the brand’s latest shot at the budget segment. The phone is the successor to last year’s Galaxy M11, and brings in some good upgrades. Samsung Galaxy M12 specifications such as the 90Hz refresh rate display, a 6,000mAh battery, and 48MP quad rear camera setup make it a great option in the budget segment. Another similarly priced smartphone was launched late last month in India by Realme. The Realme Narzo 30A appears to be the perfect competitor for the Samsung model. Hence, we decided to compare the Samsung Galaxy M12 and Realme Narzo 30A prices in India, specifications, and features to see which one is better value for money.

Samsung Galaxy M12 vs Realme Narzo 30A prices in India

The Samsung Galaxy M12 price in India is Rs 10,999 for the base variant with 4GB RAM and 64GB storage. The base variant of the Realme Narzo 30A is priced at Rs 8,999, but is available with 3GB RAM and 32GB storage. So even though you’re paying more the former, you’re also getting more value

While the Realme Narzo 30A is already available for purchase in India, the Samsung Galaxy M12 sales in India begin on March 18th. Going by the pricing and value for money, the Samsung phone seems like a better deal.

In the design department, both the Samsung Galaxy M12 and Realme Narzo 30A are pretty standard looking phones. They have plastic, textured rear panels and a waterdrop notch on the front screen. Of course, these are affordable phones, so design isn’t really a priority for the companies. The Realme Narzo 30A features a fingerprint scanner, and a square camera module at the back. Meanwhile, Samsung Galaxy M12 has a side-mounted fingerprint scanner, but also comes with a square rear camera bump.

When it comes to specifications, both phones are well equipped internally with the biggest difference being in the camera department. Samsung Galaxy M12 is powered by the Exynos 850 chipset, which is coupled with a maximum of 6GB RAM and 128GB storage. The phone comes with a microSD card slot for storage expansion with support for up to 256GB capacity cards. On the other hand, the Realme Narzo 30A is equipped with a MediaTek Helio G85 chipset, which is paired with up to 4GB RAM and 64GB storage. Once again, storage is expandable via a microSD card.

Moving to the camera setup, both phones have a square shaped camera bump at the back, but Samsung Galaxy M12 has two extra sensors when compared to the Realme Narzo 30A. The former comes with a 48MP primary sensor, a 5MP ultra-wide sensor, and two 2MP lenses for depth and macro sensing. The Narzo 30A has a dual rear camera setup with a 13MP main sensor and a monochrome sensor. Both phones feature an 8MP camera up front for selfies and video calling.

Both devices also house a large 6,000mAh battery with 15W fast charging support on the Samsung Galaxy M12 and 18W on the Narzo 30A. They both get USB Type-C port, 4G LTE, Bluetooth 5.0, and all the other standard connectivity features.