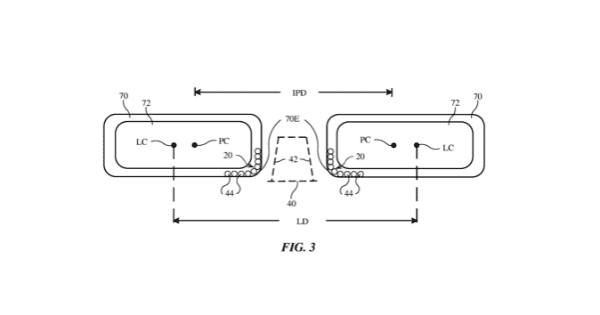 “The Apple patent says the smart glasses will be able to interact with the real world with AR and MR applications, show personalised video content, and track users’ fitness”

Apple has been granted a patent for smart glasses that details the design and hardware of the upcoming wearable as well as their potential applications. The patent was filed in February last year with the United States Patents and Trademarks Office (USPTO) and was granted to Apple earlier today. According to the filing, the headset will have a design similar to the regular spectacles, but with much greater thickness due to the circuitry and components involved. Among the applications of the Apple smart glasses mentioned in the patent are AR/ VR/ MR experiences, health tracking, content consumption, etc.

Starting with the design, the patent filing shows the Apple smart glasses will feature a spectacles-like design, but the top-view (as can be seen in the image below) will be very boxy and thick. Of course, we can expect the public, mass-production models to be slimmer. However, this design – with two separate lenses – is only one of the options for the smart glasses; the filing mentions that the display can be a single sheet of glass as well, pointing to the design we are already seeing in VR headsets.

According to previous reports, current prototypes look like sunglasses with thick frames that houses the battery and chips. That description lines up with what we are seeing in the patent images. The thick frame will be supported by two stems, which may house some of the other components.

The display, which is arguably the most interesting aspect of the smart glasses, can be based on OLED, LCD, LCoS, plasma, electrophoretic, or electrowetting display tech. It will consist of optical lenses as well as a display layer that will show the content. To compensate for interpupillary distances between different users, the glasses will have lens positioners to adjust the lens-to-lens spacing between the left and right lenses. The user can also adjust the interpupillary distance using voice input.

The thick frame of the Apple smart glasses will be home to a variety of components, with the patent mentioning HDD/ read-only SSD, static or dynamic RAM, processor, cellular and Wi-Fi transceivers, etc. The processing circuitry will comprise the usual suspects such as microprocessors, microcontrollers, DSPs, baseband processors, power management units, audio chips, GPUs, application-specific integrated circuits, etc. There will also be provision for wired as well as wireless charging, battery-storing capacitors, joysticks, and buttons.

There will also be sensors for 3D images, gaze-tracking, touch, force, gas, moisture, fingerprint, and optical position. Of course, accelerometers, gyroscopes, compasses, etc will also make their way into the Apple smart glasses. To interface with the user, the smart glasses will be able to use haptic feedback, LEDs, speakers, etc.

To make sure the headset doesn’t exert too much weight on the user’s nose, the control circuitry will be able to adjust the lens modules. This will be done with the help of the interpupillary distance information and the sensing circuitry. However, the exact mechanism that helps alleviate the weight and make wearing the headset more comfortable for long durations is not clear from the patent filing.

As per the patent, the Apple smart glasses will be able to accept or receive video and audio with other devices, including smartphones, computers, remote servers, etc. The software used in the smart glasses will be used for gathering data, processing information related to 3D facial images, and operations involving adjustment of components using control signals.

Among the most exciting implementations of the Apple smart glasses will be in the field of AR and VR. The patent says the smart glasses will work with AR, VR, and MR content. The integrated cameras will be able to capture images of the user’s surroundings; these images will then be merged with overlaid computer-generated content. Some of the key hardware for XR applications for the smart glasses will include beam splitter, prism, holographic coupler, and other optical couplers.

Apart from this, the Apple smart glasses will have applications in the field of health tracking too, as per the patent. Some of these will include tracking of vital signs measurements, medication information, exercise information, etc. The glasses will also collect users’ personal data, such as date of birth, facial information, location and demographic, telephone number, email address, Twitter handle, home address, as well as other key health and fitness information.

This personal data will be used to “provide insights into a user’s general wellness or may be used as positive feedback to individuals using technology to pursue wellness goals.” The personal data can also be used to deliver content tailored to the user’s interests, which is one of the more obvious use cases of smart glasses.

And with personal data involved, Apple says in the patent filing that the data will not be sold to third-parties and will comply with “well-established privacy policies and/or privacy practices.” Moreover, there will be provisions to remove some of the specific identifiers from the personal data, controlling how data is stored (restricting location data to city-level and not address-level has been mentioned as an example), and regulating how the data is stored.

The Apple smart glasses and headsets have been in the rumour mill for a few years now and are considered one of the key products to help the company in the post-iPhone world. According to a report by the ever-reliable The Information, the brand aims to launch an AR headset in 2022, followed by a pair of smart glasses in 2023. Some analysts, however, believe we may get a look at the headset at least in 2020, so only time will tell who is more accurate.

As for the features and applications of the smart glasses and the headset, they are said to have AR and VR capabilities and high-resolution displays. The lenses will reportedly become dark in colour when the user is watching something in order to signal to others that they are occupied. The key focusses of the AR/ VR experience are said to be gaming, virtual meetings, and video consumption. Both the headset and the smart glasses will have a facial recognition system that’s more advanced than Face ID and use a 3D ToF sensor. Apple is said to be working with Valve for games and will reportedly start contacting developers to make apps for the headsets.

In a recently discovered patent, Apple shows a user’s iPhone or iPad (if placed nearby) will be automatically unlocked if they are wearing a “head-mounted device” that acts as an authentication device or sorts. Such an implementation is already seen on Mac computers, which can be unlocked automatically if the user is wearing an Apple Watch.