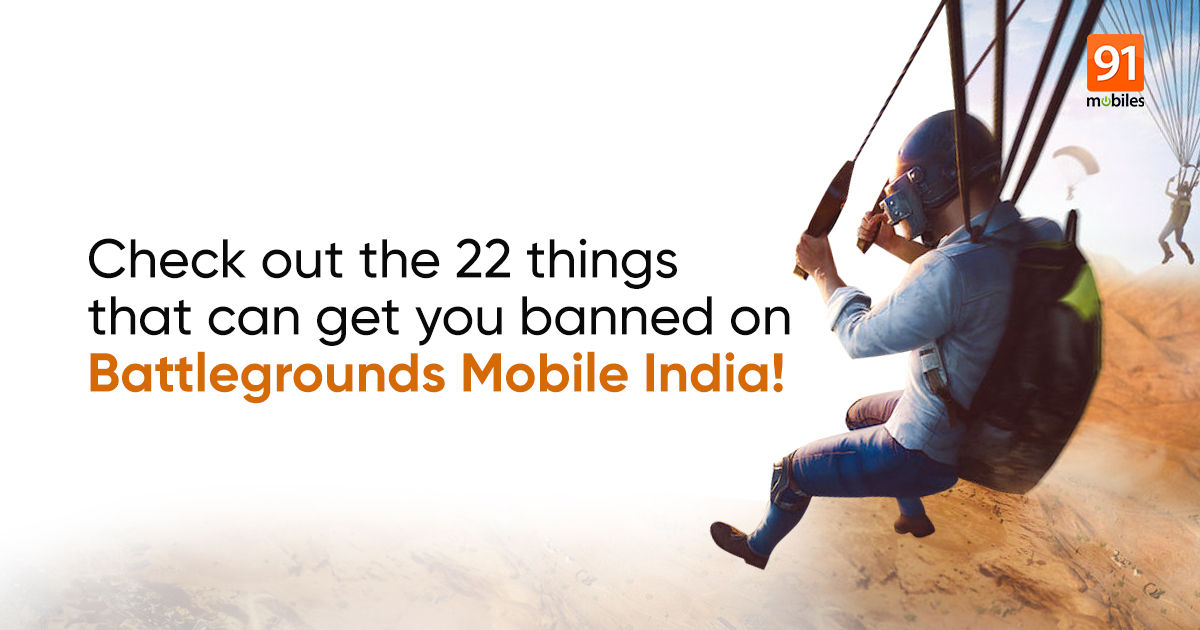 Battlegrounds Mobile India (BGMI) aka PUBG Mobile made its public appearance with a beta release a few days back. Krafton announced the early access is open for everyone, which has got everyone excited. As we have mentioned in our first impressions, Battlegrounds Mobile India has more similarities to PUBG Mobile than we had expected. There are certain things that we can call India-exclusive with the battle royale game. And before you start playing the new PUBG Mobile avatar on mobile, Krafton has listed a set of guidelines that every gamer needs to follow. Otherwise, their account will be restricted or permanently banned from playing Battlegrounds Mobile India. Here are the rules that the developer has notified to one and all.

Things that can get you banned from Battlegrounds Mobile India

Not using unauthorised program or devices

Gamers are specifically meant to use devices and software programs on Battlegrounds Mobile India that are permitted by Krafton. So, if you play using a specific mouse or any other hardware unit not authorised for use by the developer, you will be heavily penalised by their game time restriction for your account or even a permanent ban from Battlegrounds Mobile India.

That’s not all, if any user develops or distributes a program that has not been cleared by Krafton, they may face legal consequences relevant to the laws and face penalties as well.

The other thing people cannot do on Battlegrounds Mobile India is to change any game setup that is officially and legally owned by Krafton. These include game servers, data packets or any unwanted interference with services available through the game.

Games are basically a version of the software that can often carry some bugs or vulnerabilities that users can take advantage of. But Krafton has a strict policy regarding such malpractices. So if a user exploits any issues with Battlegrounds Mobile India, they face serious penalties, and all the rewards accrued in that fashion will be removed from their account.

Racial or sexual discrimination of user

Discrimination of any sorts is unacceptable to Krafton and the developer has strict punishment for the offenders. If any person is found using offensive language or disrespect towards gender, race or nationality, they face serious charges for their actions.

Krafton wants the in-game experience to be fair which is why team kill is strictly off the books for the developer. So, if the admin finds any team kill to be intentional or reoccurring, that player will be reprimanded and face action for the act.

Irregular teaming up with players

In multi-player games, it is often seen that users team up for revenge or any other motive against the other group. Krafton calls this as intentional teaming up and in Battlegrounds Mobile India that is strictly not accepted. The person will be penalised for such intent. Additionally, if you team up with a person using unauthorised devices to gain an advantage over other teams, you will face similar charges.

Stalking is a serious offence in all forms, and in gaming the rules are applicable. So if any user is found stalking other players in Battlegrounds Mobile India, they will face penalties for such action.

Gamers sharing the personal information of other users on public platforms is seen as a privacy violation. So invariably, the offender faces charges for breaking the rules of the game.

Games have a natural course of action, the basis on which a result comes in the end. But if any person tries to change it by artificially setting up with other teams in-game by giving them cash or tools and gets caught, they lose access to all the items they acquired in-game. Along with strong penalties for such malpractices.

Stepping away from the keyboard

Most gamers know the term Away from Keyboard or AFK that means they are not in tune with the game situation for a short while. But Krafton believes AFK puts the team at a disadvantage. So if any user is AFK to earn points or other activities, their account will be penalised and the items won will be removed.

Selling or trading of game account or any data of the person without taking approval from Krafton deems their offence that is liable for strong penalties.

Additionally, if any user shares false information to disturb the business by harassing the employee (Krafton in this case) or spread rumours about them, that user could be permanently banned for their misconduct. Krafton says that any unlawful activity or action not part of its Rules of Conduct will force them to charge the person with penalties.