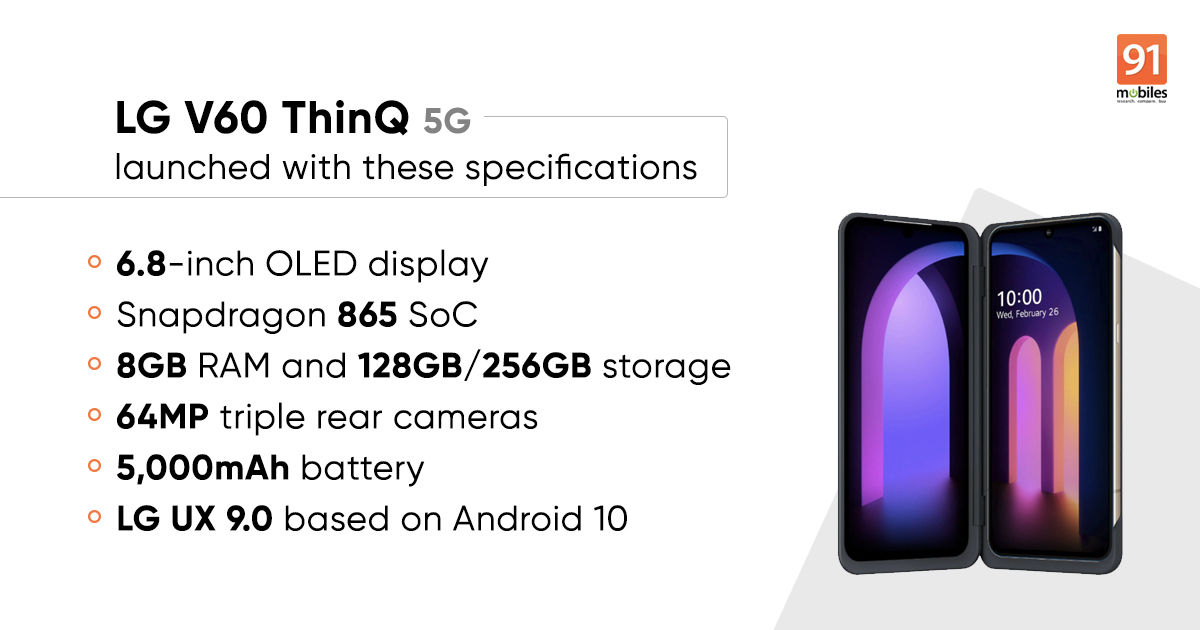 LG has refreshed its flagship V series with the launch of LG V60 ThinQ 5G smartphone. The all-new V60 ThinQ is powered by the Qualcomm Snapdragon 865 chipset paired with the Snapdragon X55 modem which supports both 5G mmWave (higher bandwidth) and sub-6GHz (better coverage). Apart from this, the handset comes with a dual-screen accessory – just like the LG G8X ThinQ, a punch-hole display, 64MP triple rear cameras, and a beefier 5,000mAh battery. The LG V60 ThinQ 5G is also the first LG smartphone to support 8K video recording with support for HDR10+ in manual mode.

The LG V60 ThinQ price has not been announced yet, but the phone will be available for sale later this spring. Interested buyers will be able to grab the handset in two colour options: Classy Blue and Classy White.

Coming to the specifications, the LG V60 ThinQ 5G sports a 6.8-inch OLED display with Full HD+ (2,460 x 1,080p) resolution, waterdrop notch, 20.5:9 aspect ratio, and in-display fingerprint scanner. The secondary screen for multi-tasking that snaps on/ off the phone touts a 6.8-inch FHD+ P-OLED FullVision display that bears 20.5:9 aspect ratio. It also has a 2.4-inch mono cover display on the other side to view notifications at a glance. Furthermore, the secondary display comes in black and white colours, measures 175.9 x 86 x 14.9mm, weighs 134 grams, and has a 360-degree free stop hinge. 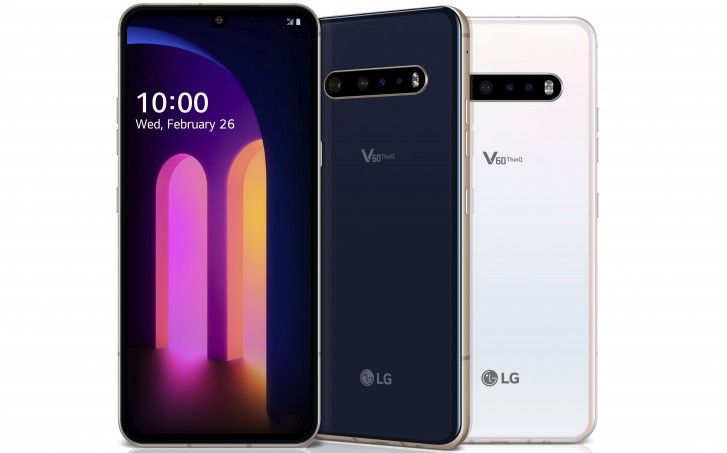 Under the hood, the LG V60 ThinQ 5G rocks the flagship Snapdragon 865 SoC, which is coupled with 8GB RAM and 128GB/ 256GB storage that is further expandable up to 2TB using a microSD card. The phone’s triple camera setup at the back consists of a 64MP primary camera with f/1.8, 13MP super-wide sensor with f/1.9 and 117-degree field-of-view, and a ToF sensor. The phone is capable of 8K video recording with support for HDR10+ in manual mode.

The phone is driven by a 5,000mAh battery with Quick Charge 4+ as well as wireless charging, while Android 10 with LG UX 9.0 on top takes care of its software side of things. Connectivity options include 5G, LTE, Wi-Fi 6, Bluetooth 5.1, NFC, and USB Type-C. The handset measures 169.3 x 77.6 x 8.9mm and weighs 214 grams. Other features include a dedicated button for Google Assistant, IP68 water and dust resistance, MIL-STD 810G military-grade durability, 32-Bit Quad DAC, stereo speakers, and a 4 microphone setup.