Motorola Nio is said to be in the works and is expected to launch in 2021. A recent leak has revealed the complete specifications of the phone, including the chipset details and more. Now, an alleged leaked image of Motorola Nio has surfaced online courtesy of Evan Blass and it reveals the front design of the phone in full glory. The Motorola Nio can be seen with dual hole-punch cutouts arranged separately for selfies and video chats, ultra-slim bezels and a sizeable chin below the display. The tipster says the phone will have 8GB RAM, 256GB storage, 5,000mAh battery, and will run Android 11 OS out of the box. Motorola Nio is said to come with DisplayPort Alternate Mode that will allow connecting external displays. 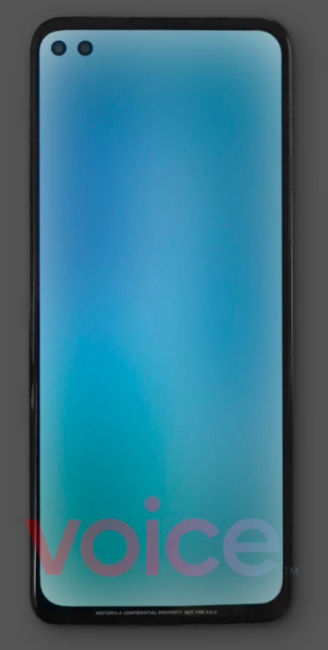 As for the leaked specifications, the Motorola Nio is said to flaunt a 6.7-inch FHD+ display with 1,080 × 2,520 pixels resolution and 105Hz refresh rate. It is tipped to be powered by the Qualcomm Snapdragon 865 SoC paired with Adreno 650 GPU, 8GB RAM, and 256GB storage. The phone runs on Android 11 OS out of the box. Moving to the optics, the Motorola Nio is said to feature a triple camera setup, comprising of a 64MP OmniVision OV64B wide-angle sensor, a 16MP OmniVision OV16A10 ultra-wide-angle lens, and a 2MP OmniVision OV02B1B depth sensor.

There is a 16MP OmniVision OV16A1Q wide-angle primary camera on the front and an 8MP Samsung S5K4H7 ultra-wide-angle secondary lens for selfies and video chats. A 5,000mAh battery is said to fuel the phone. While the exact launch timeline isn’t clear, the Motorola Nio is said to launch by Q1 2021. It also remains to be seen whether the Motorola Nio will be a part of the Edge series.