“Will the nubia Z11 miniS rise above its photography expert tag and impress us with its overall performance?”

Cameras on smartphones under Rs 20,000 are average at best. Whenever someone asks me for a smartphone with a good camera in that price range, I hesitate a bit and then eventually, almost always, recommend the Moto G4 Plus (review) for its image fidelity or the Honor 6X (review) for the dual cameras. With the launch of the G5 Plus (review), you have one more option but that’s that… there’s not much out there really. Enter, the nubia Z11 MiniS – the third variant in the Z11 range of smartphones to be launched in India. 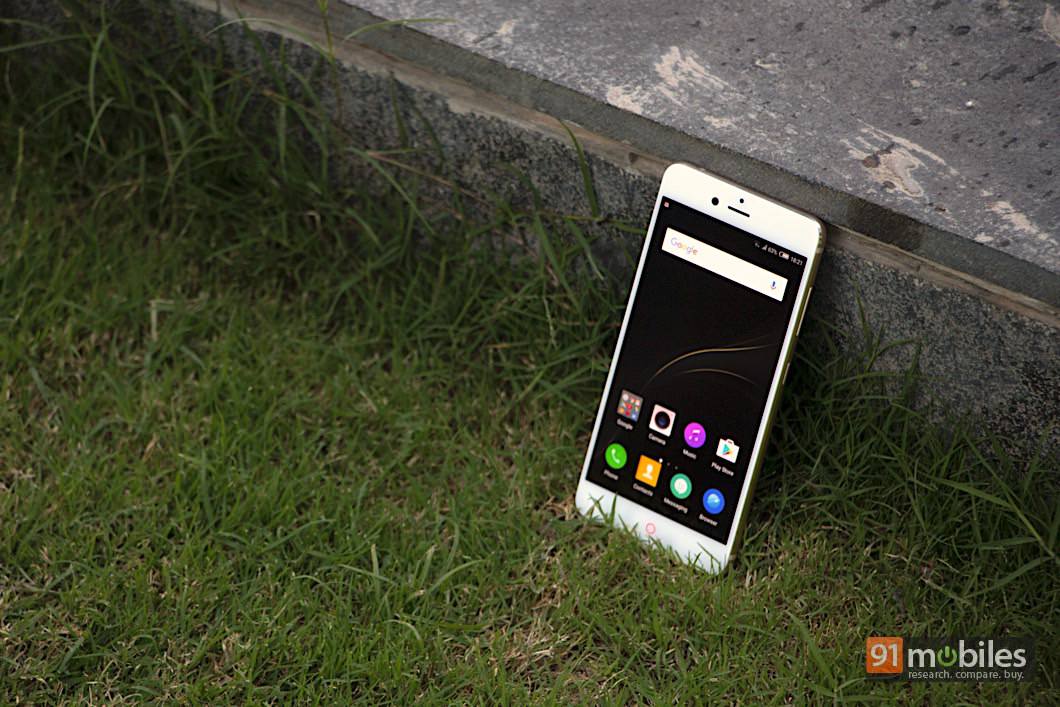 nubia is touting the photography features of the Z11 MiniS, and why not? It has a 22.6MP camera with a 1/2.6-inch Sony IMX 318 sensor, the same one used on the Xiaomi Mi Note 2 and the Asus ZenFone 3 Deluxe (review), both much more expensive smartphones. There’s also a 13MP front-facing camera with screen flash. At least on paper, the Z11 MiniS’ camera looks like a force to reckon with. However, can the nubia Z11 MiniS be more than just the camera?

Great for daylight shots and selfies

Let’s talk about the cameras first before we explore the other bits of the phone. The 22.6MP Sony IMX318 sensor is attached to a f/2.0 lens. Like I mentioned earlier, the ASUS Zenfone 3 Deluxe has a similar setup. When I had reviewed the Zenfone 3 Deluxe, I’d mentioned how my camera samples were incredibly detailed. 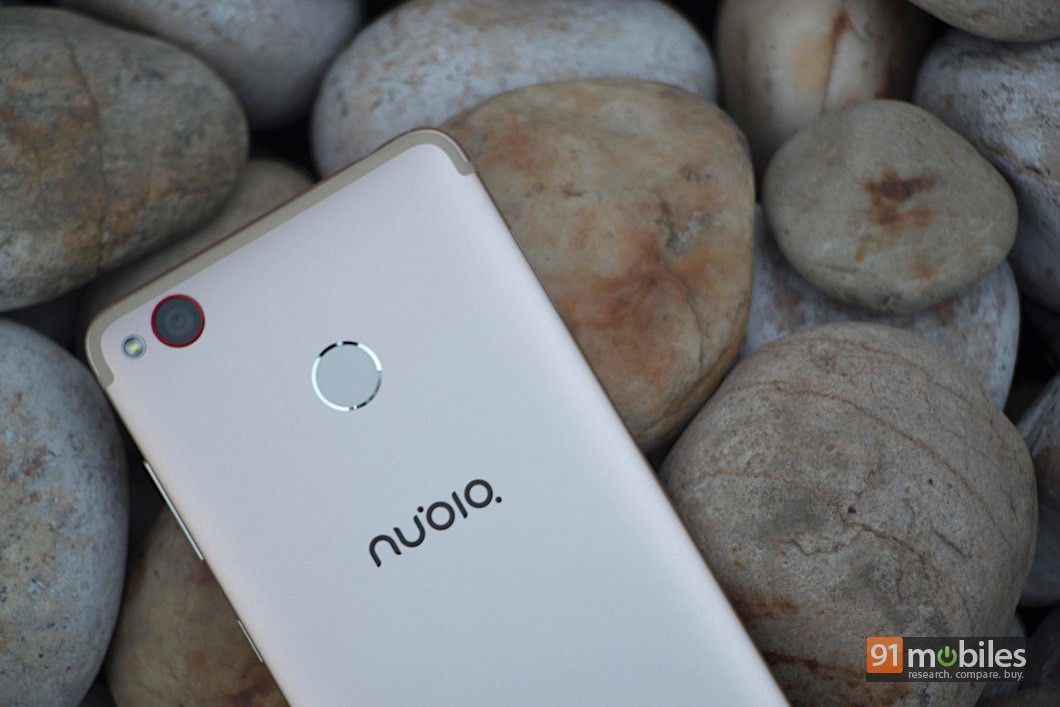 I am happy to report that the nubia Z11 MiniS replicates the performance and my sample shots were incredibly detailed in good lighting conditions, and it is also a fairly fast shooter — not as fast as the Moto G5 Plus though. In my daylight samples, I noticed that the algorithm tends to crank up the saturation a bit to make the final photograph look punchy and attractive. Also, the camera captures relatively accurate facial colour tones as well. The only caveat is that, in the long shots, I noticed an evident barrel distortion and softness in the corners. Although, that is an issue with most smartphone cameras… so nothing to fret over.

Another thing I noticed is that the camera struggled to focus on subjects in close range, but there is a dedicated Macro mode that takes care of the problem. Unfortunately though, the Macro option is tucked away in a weirdly named mode called ‘Camera-Family’. The Camera-Family mode has other sub-modes like Pano, Star Trail, Clone, and many more. Basically, nubia offers you a ton of options to get creative with the camera. I had a lot of fun with the Clone mode especially. Take a look at the sample to know what you can do with the mode. Obviously, even a third-party app can achieve this, but its default availability on the camera app should ensure a higher adoption rate. 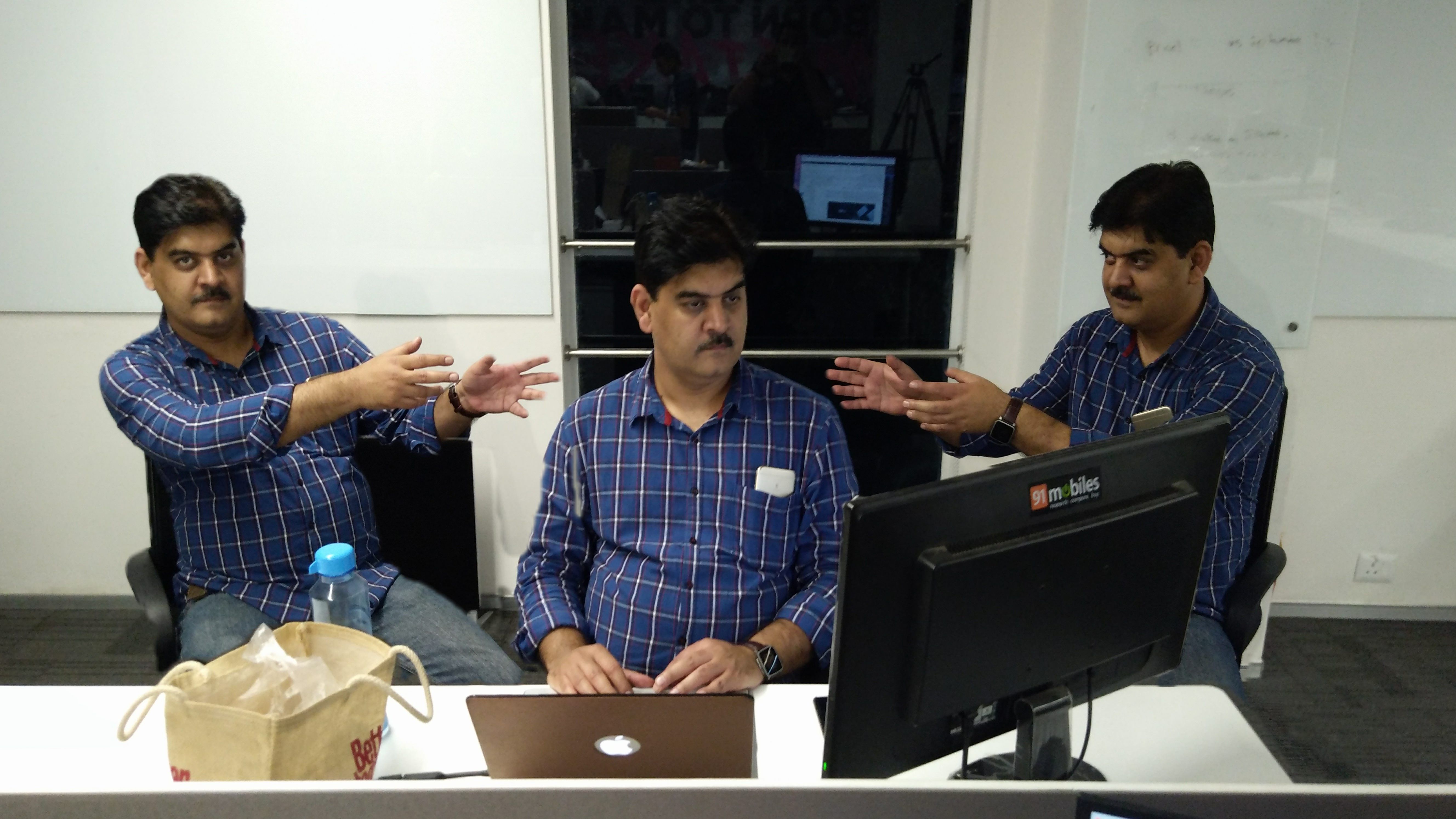 In low light, the nubia struggles to deliver good results, much like most other smartphone cameras in this price range. My test shots had soft details but it does let in a decent amount of light. If you are someone who shoots on the phone, views on the phone, and shares through the phone, the results might impress you. However, the moment you transfer it to a computer you will notice a ton of flaws. Similarly, thanks to the lack of dedicated OIS, 4K video recording turned out to be very shaky. There’s also a slow motion video recording option but it returned below average results.

For the selfie fans, the phone offers a 13MP shooter that can capture some incredibly detailed selfies in daylight and some decent ones in low light as well. nubia also offers a Pretty mode (beautify in other phones) to smoothen your skin and give it a glow, if you are looking for such a feature that is.

Yet another iPhone 7 lookalike, but with an ergonomic design

Lately, I’ve been noticing that a lot of smartphones made by Chinese brands are inspired by the Apple iPhone 7’s (review) design. Case in point, the vivo V5 Plus (review) and the OPPO R9s. Joining the fray is the nubia Z11 miniS. From the speaker and USB type-C port setup at the bottom to the antenna lines on the rear, the Z11 miniS takes more than just an inspiration from Apple’s flagship. However, nubia’s signature red circular LED home button and the red camera ring adds some level of differentiation to the phone. I like the capacitive touch buttons below the display. It is neatly backlit in red and it looks rather attractive when it glows. 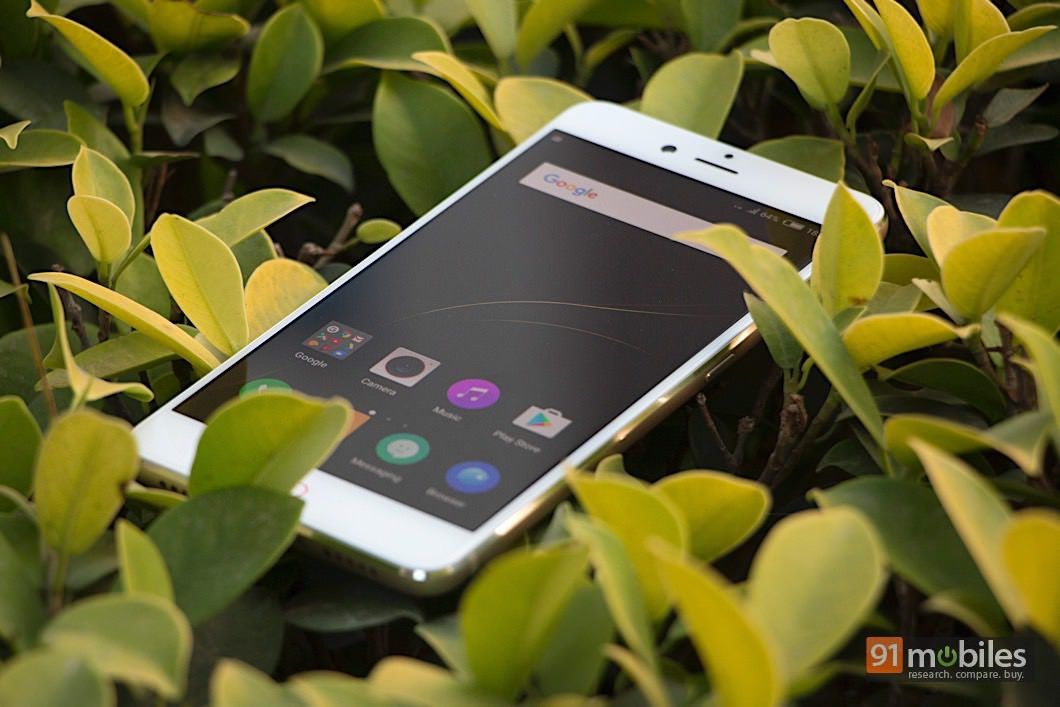 The Z11 MiniS might look like an iPhone 7 clone but I must say that it feels every bit as premium. The phone is carved out of a single piece of series 6000 aluminium for most part of the phone. The edges are curved and sides are chamfered. The metal continuity is broken by a 2.5D curved glass layered on top of a 5.2-inch full-HD IPS LCD screen. The rear also curves nicely and the entire phone fits in the palm — as much as I hate saying using this comparison — like a glove. Moreover, the phone weighs 158g and for its dimensions of 146.1 x 72.1 x 7.6 mm it is on the heavier side. Although, I felt that the heft was nicely distributed across the body of the phone making it even more ergonomic.

The power button and the volume rocker are placed on the right edge, and they offer adequate tactile feedback but I still feel that it could have been better. The fingerprint scanner rests on the rear and it is easily accessible. The scanner is quick at scanning the finger and unlocking the phone. The phone accepts two nano SIM cards and you can choose to sacrifice one of the SIM slots to add a microSD card instead. I am not a fan of hybrid slots but it is a matter of personal preference really.

Talking about the 5.2-inch display, it is crisp, offers a balanced colour profile, and the software allows you to tweak the colour tone to your preference. Also, nubia has used in-cell screen technology for the display, which essentially means the digitiser for the touch input and the IPS LCD panel itself are combined into a single layer. To explain this in layman’s terms, the icons feel like they are floating on the display. Furthermore, the viewing angles are great as well. The display can get adequately bright to negate the harsh rays of the sun. However, the performance of the auto brightness setting was iffy at best. It tends to resort to a lower than ideal brightness setting.

nubia UI 4.0 software is feature rich but it is a hot mess

The Z11 miniS runs Android 6.0 Marshmallow with nubia UI 4.0 skin on top of it. On the face of it, the software looks nondescript with all the apps lined up on the home screen and no app drawer, but dig deeper and you will realise that it is filled to the brim with features. But if I have to be straight, the software is a hot mess and most of the features are better left untouched.

Forget the slew of third-party apps or the fact that you cannot delete a home screen without digging deep into the settings, just the slow animations of nubia UI 4.0 will make you tear your hair out in frustration. Switch on the uber-cool but utterly impractical Edge Gestures and matters become worse. Talking about Edge Gestures, it is the same feature we saw on the nubia Z11 (review) first. Essentially, you can go back to the previous app by swiping up from the bottom of the screen or swipe up / down along the edges of the screen to increase / decrease the brightness, or just pick one of the other gestures from the options available. Most of these gestures come in the way of other actions like when you are typing something or changing songs. After the initial excitement of using these gestures, I just turned it off. 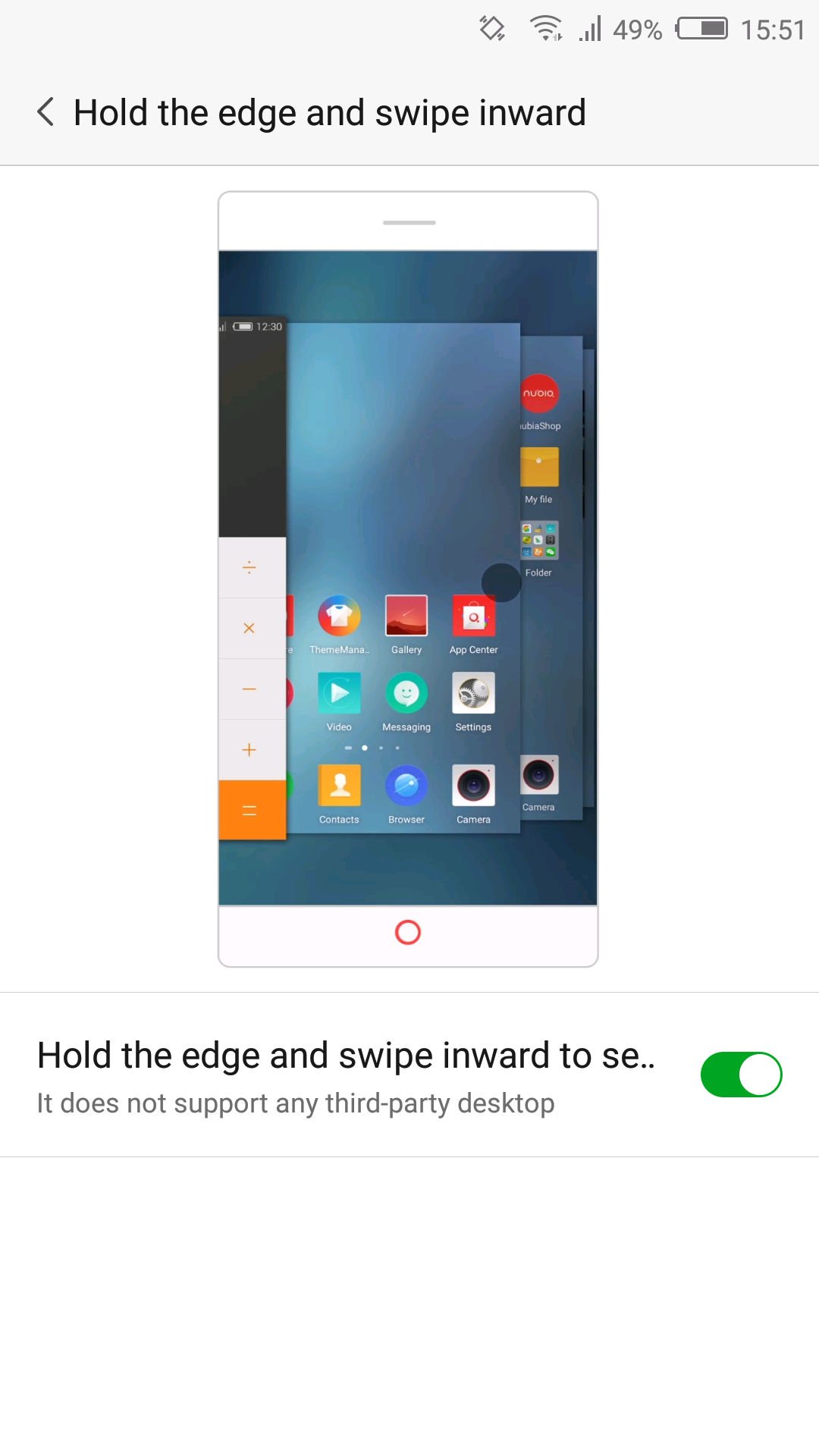 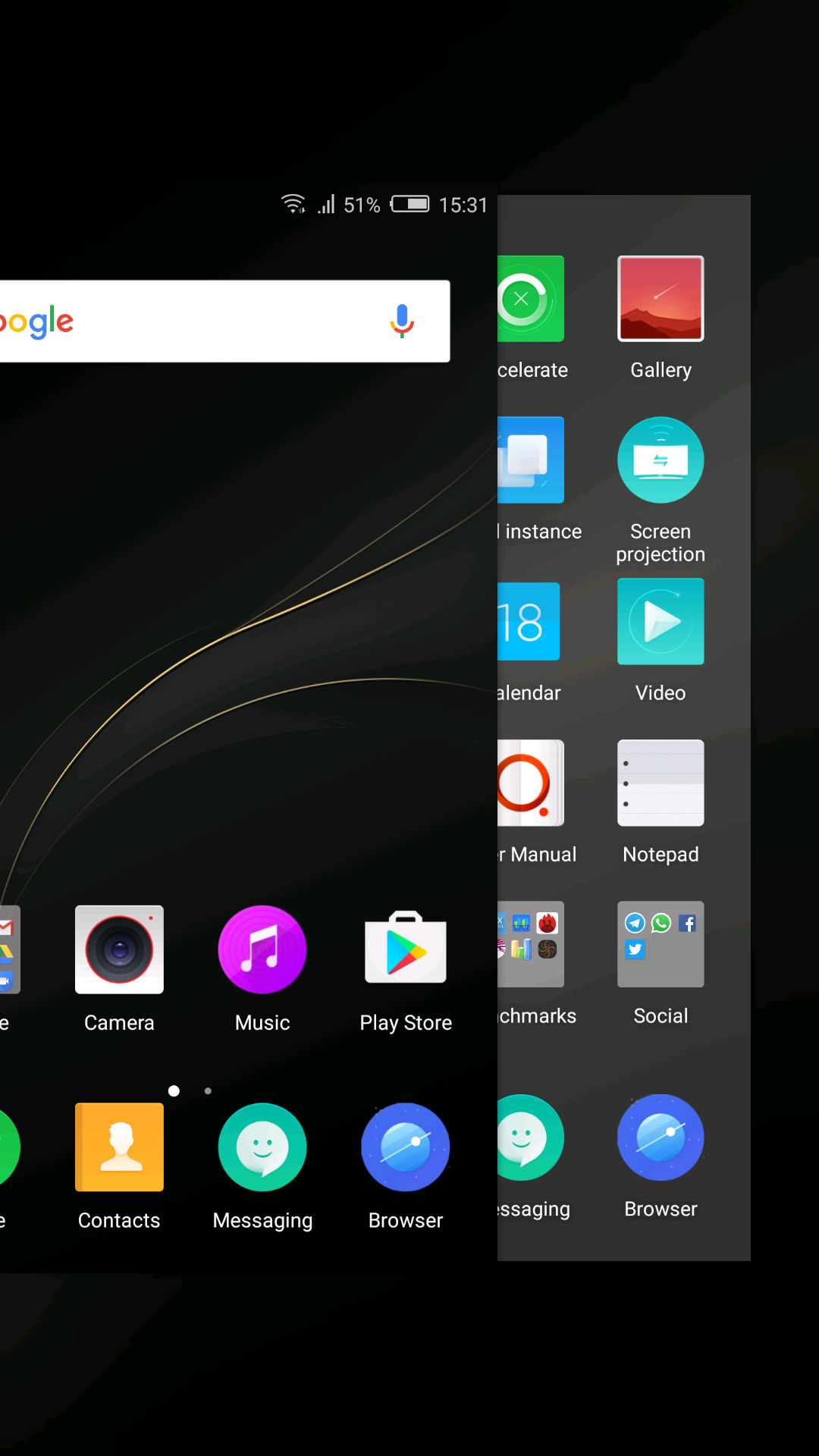 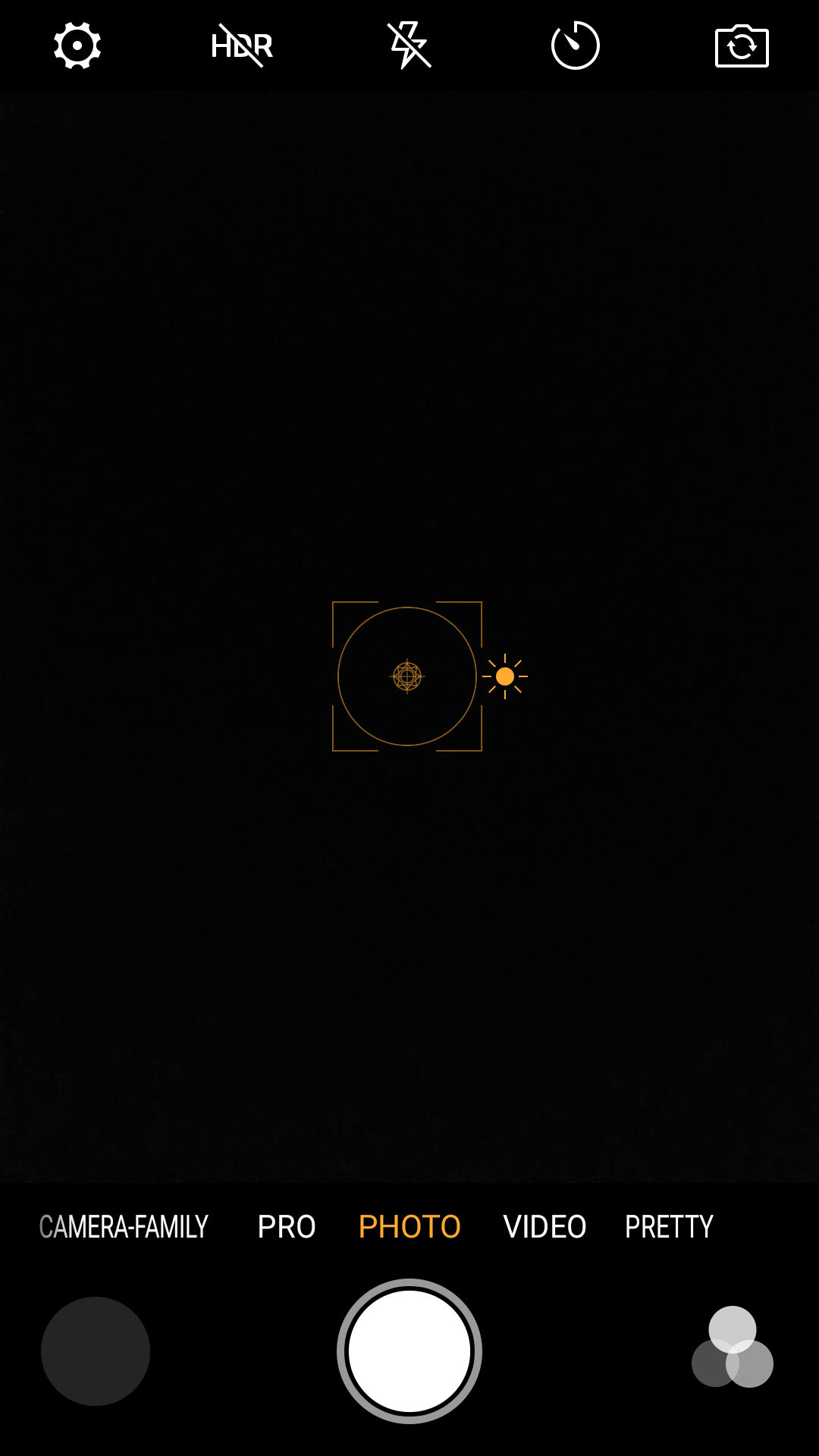 That’s not all, there are more features. For example, you can long press the fingerprint scanner to take a photograph, which is actually quite handy. You can even have dual instances of the a few apps like Facebook and WhatsApp. In my testing, I noticed that Telegram and Twitter weren’t supported. There is a Mini Launcher mode in which you can split the screen to view two apps at once but many apps just don’t scale which defeats the purpose.

I really wish nubia’s engineers had spent some more time at the drawing board to polish the software. There are so many good ideas but it just doesn’t translate well in the final product, and I am not even mentioning the cringeworthy English language errors sprinkled across the operating system. 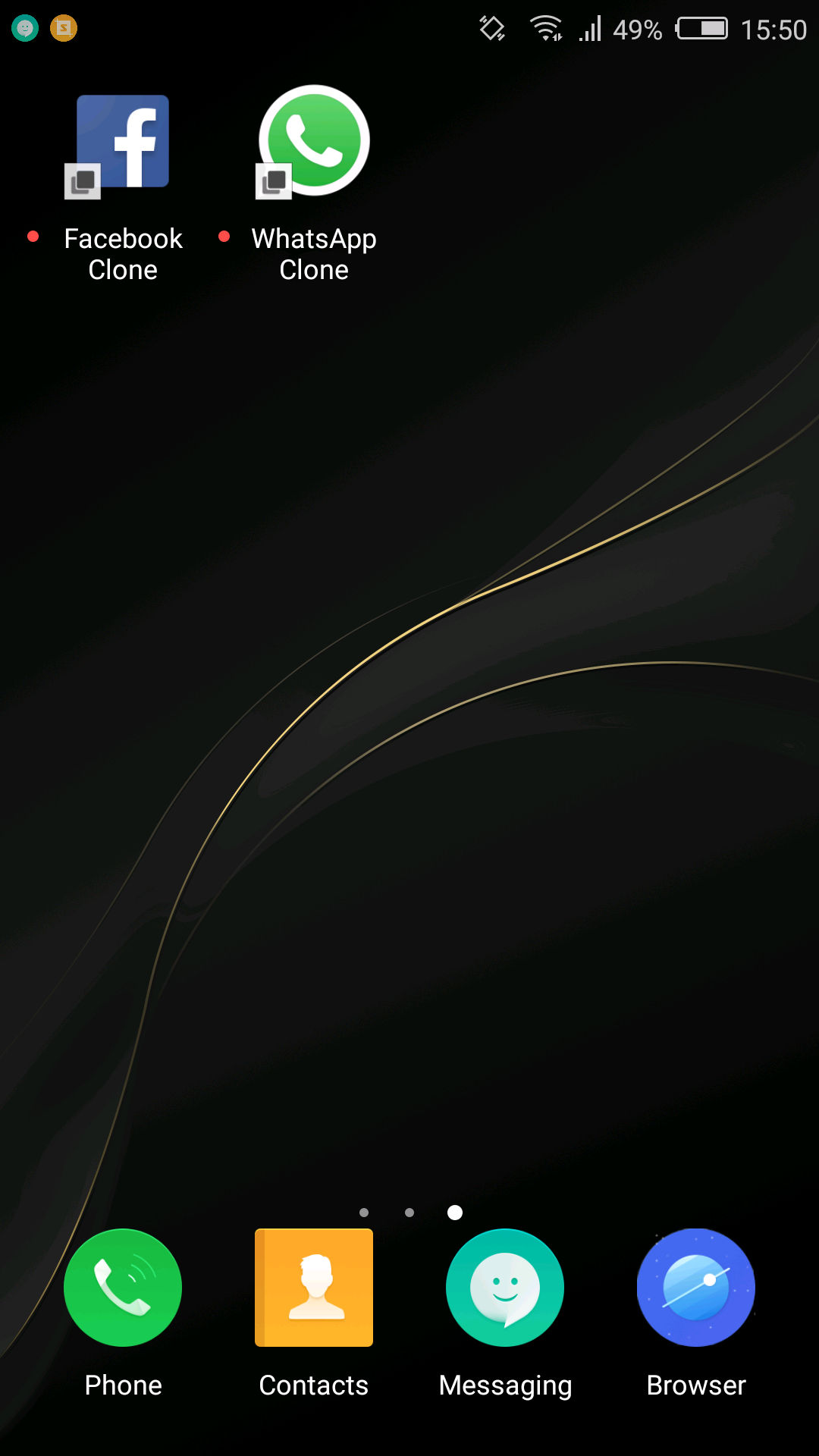 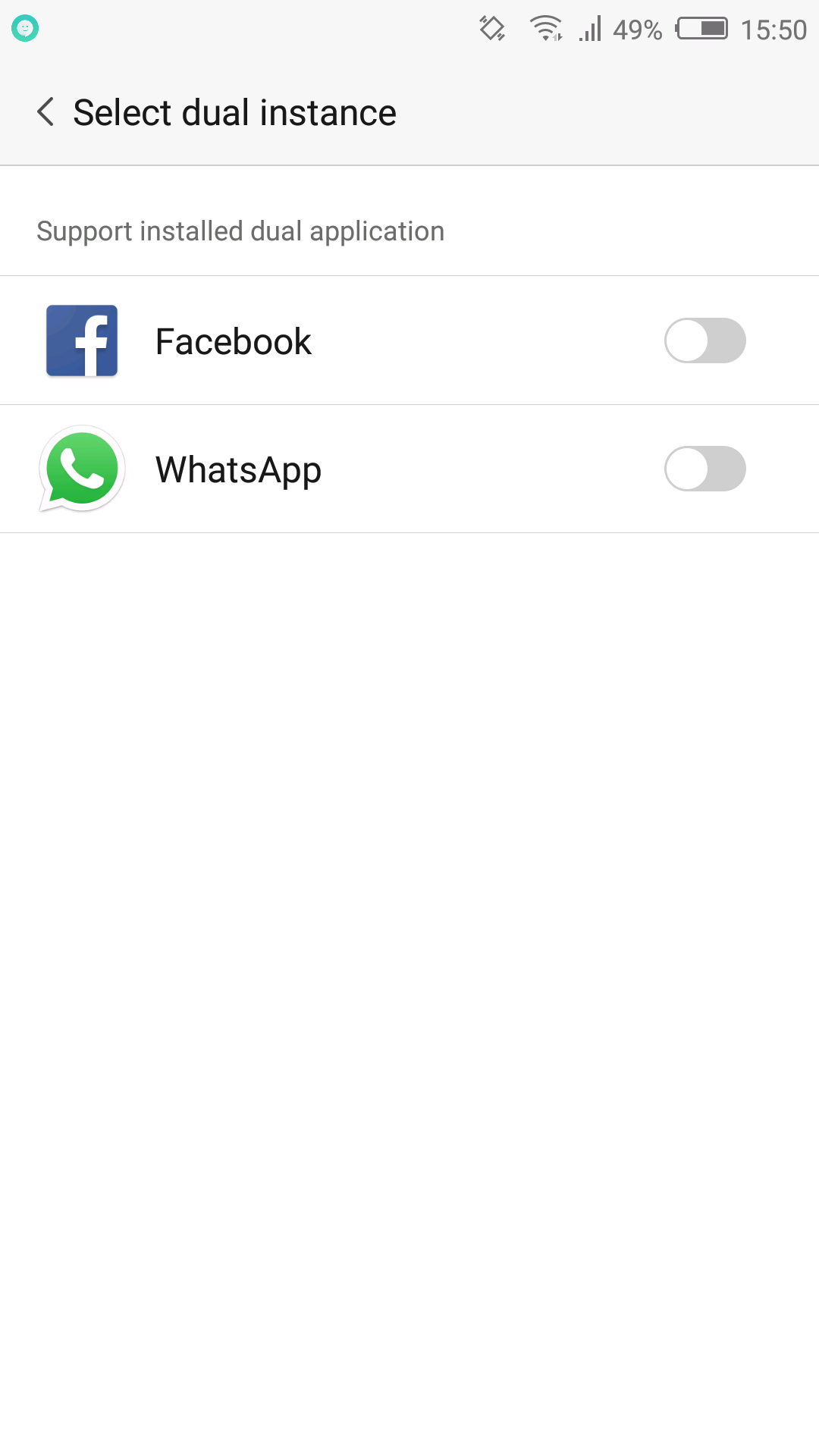 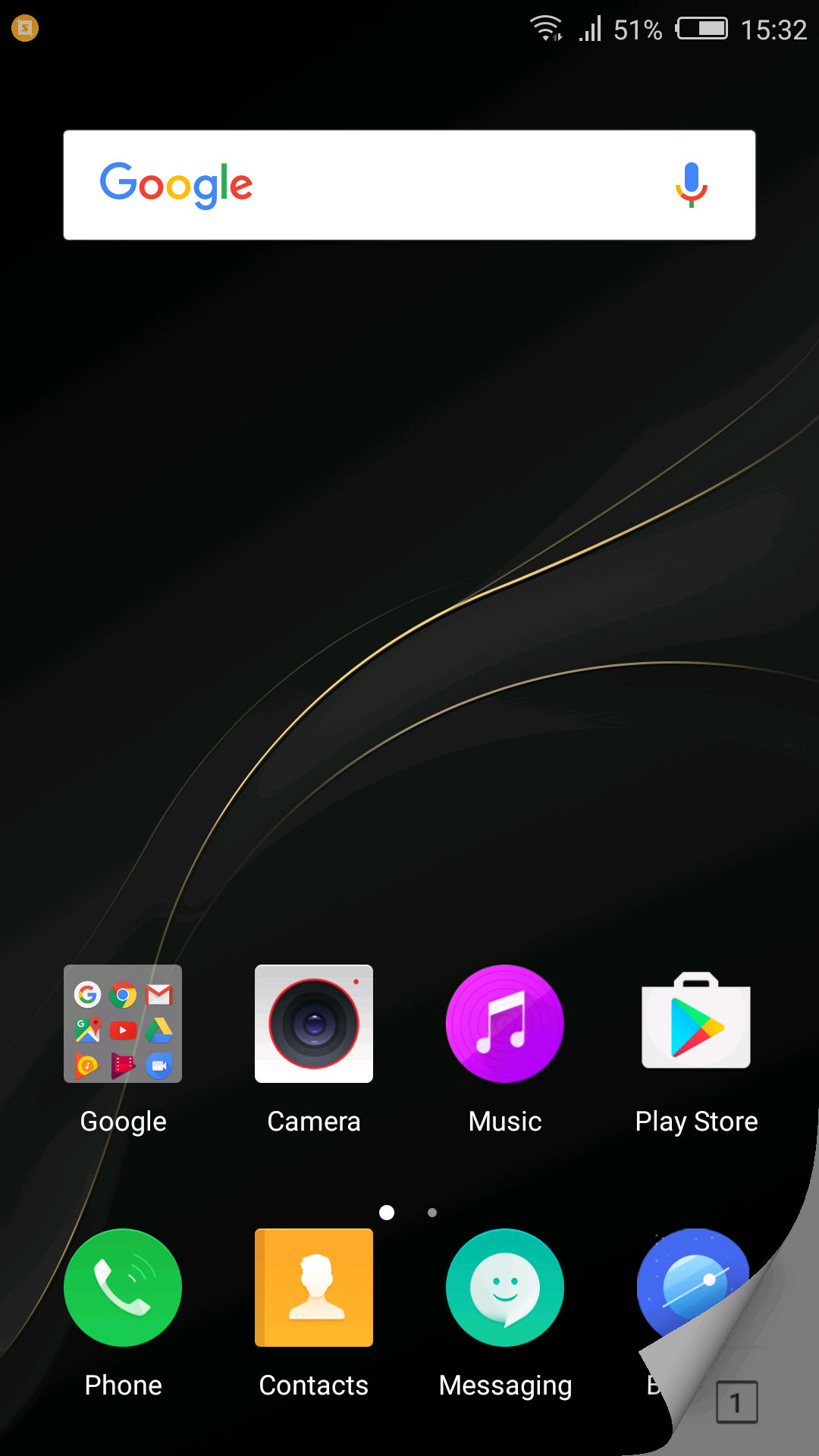 The clunkiest Snapdragon 625-powered smartphone yet

Before I talk about the internal hardware of the nubia Z11 miniS, let me just say this – do not, I repeat – do not switch on all the extraneous features like Edge Gestures if you want smooth performance. Despite the use of the ever-reliable Snapdragon 625 SoC and 4GB of RAM, the phone stuttered in daily usage. Even opening apps and just swiping between home screens was a task. Switch off the Edge Gestures, and the performance improved drastically. 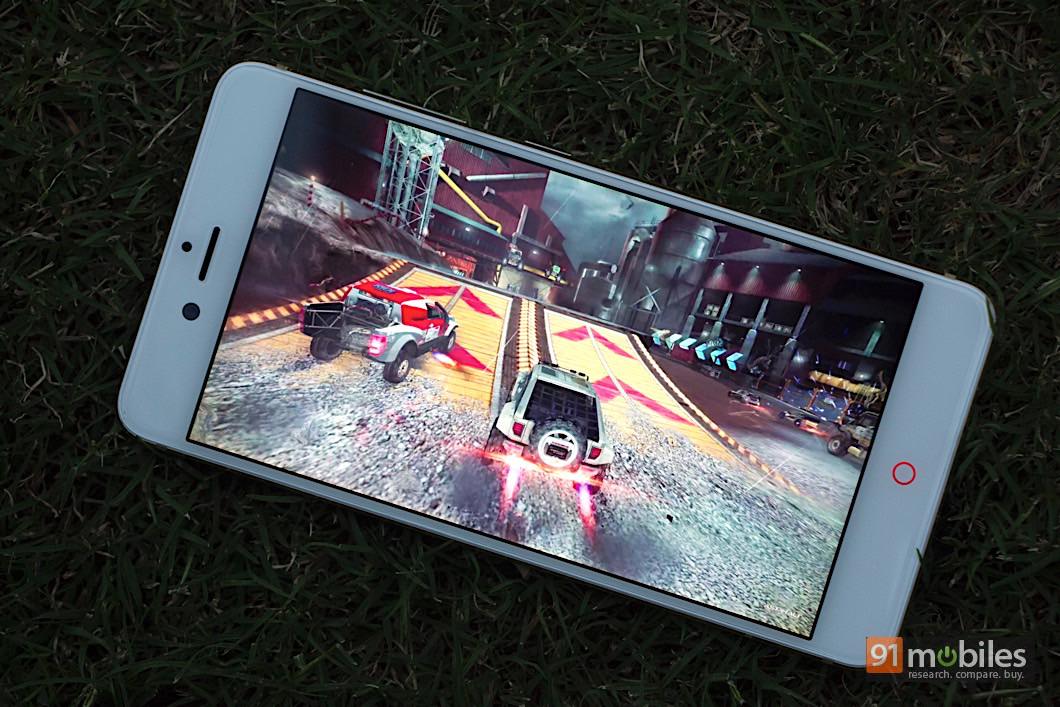 Also, for some odd reason Modern Combat 5 ran at watered down graphics settings on the Adreno 506 GPU; something I’ve not noticed on other smartphones with the same GPU. Furthermore, as was the case with previous SD625 phones, the load times for games are really high. Having said that, the advantage of using the SD625 is good battery life. Even on a 3,000mAh battery the nubia Z11 miniS can easily last you a day on heavy usage. In our battery test, the phone lasted 13 hours and 53 minutes further augmenting our findings in the real world. However, there is no fast charging support and the battery takes at least 2 hours and 30 minutes to charge from 0 to 100 percent.

Multimedia-wise, there is only a single firing speaker at the bottom despite the design that incorporates two speaker grilles. This speaker gets adequately loud and I don’t have any complaints really. nubia doesn’t bundle a headset in the box but using my reference earphones I absolutely enjoyed the sound quality. The earpiece is pretty good too. The phone can handle phone calls with ease and I never faced a call drop either. 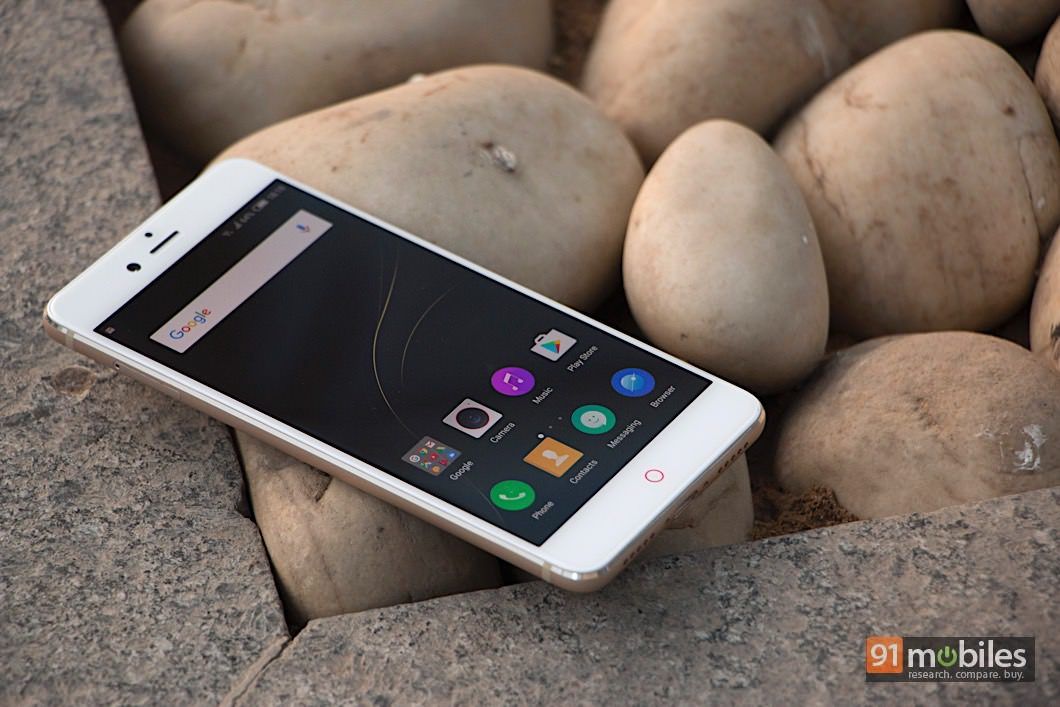 So, is the nubia Z11 miniS — priced at Rs 16,999 — more than just a good camera smartphone? The short answer to that is – no. Primarily because the software is a mess, and the hardware doesn’t perform to its potential. Don’t get me wrong, it is not an entirely bad phone… it’s just a stack of missed opportunities, except for the cameras of course. That said, the Moto G5 Plus’ rear camera goes toe-to-toe against Z11 miniS’ 23-megapixel shooter.

Buy the nubia Z11 miniS if all you want are good cameras, a great display, and can live without the fancy Edge Gestures.