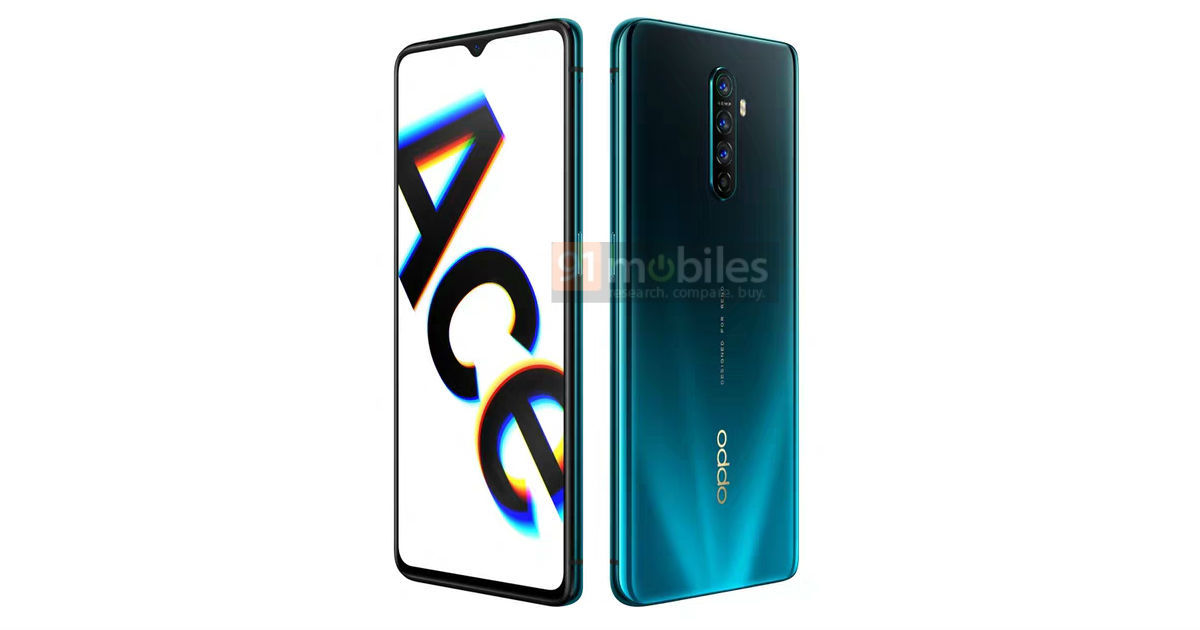 “The OPPO Reno Ace is scheduled to launch on October 10th in China, and it’s tipped to feature 48MP quad cameras and waterdrop-notch display”

The OPPO Reno Ace smartphone’s design has been revealed from all angles, thanks to official renders 91mobiles has received from a trusted source. The renders show all the key design details of the OPPO Reno Ace, such as the quad camera setup on the back, glass rear casing, gradient colours, and edge-to-edge display with waterdrop notch. The upcoming mid-range phone, which is slated to launch on October 10th, has already been confirmed to be the first phone with 65W fast-charging in the world. The OPPO Reno Ace could have a display with 90Hz refresh rate too, but that’s speculation for now.

As can be seen in the renders, the OPPO Reno Ace camera module is vertically-aligned in the middle of the frame and has 48MP etched below the sensor on the top. The back panel of the OPPO Reno Ace will most likely be covered with a glass layer and boast of gradient finish. In the front, the screen has minimal bezels and a waterdrop notch to house the selfie camera. The handset has minimal bezels and a chin at the bottom. The power button appears to be on the right edge of the Reno Ace, while the volume buttons are on the right. Since there is no capacitive fingerprint scanner on the phone, it could be integrated in the display. Lastly, the handset could be available in at least two gradient colour options: green and purple.

The Reno Ace, as per a TENAA listing, may pack a 6.5-inch AMOLED display with full-HD+ resolution and 2.96GHz octa-core Snapdragon 855 Plus chipset. The phonemaker is expected to ship the smartphone with up to 12GB RAM and 256GB of built-in storage. For photography, the Reno Ace will reportedly pack a 48-megapixel primary sensor, a 13-megapixel secondary, an 8-megapixel third, and a 2-megapixel fourth sensor at the back. The front camera of the phone would get a 16-megapixel shooter for selfies and video calling. The entire setup is expected to be driven by a 4,000mAh battery.

Talking about the battery, the OPPO Reno Ace could boast a whopping 65W SuperVOOC fast-charging support. Not much has been revealed about the tech, but it’s considered to be faster than OPPO’s current 50W speed, which is capable of fully juicing up a 3,700mAh battery in roughly 35 minutes.