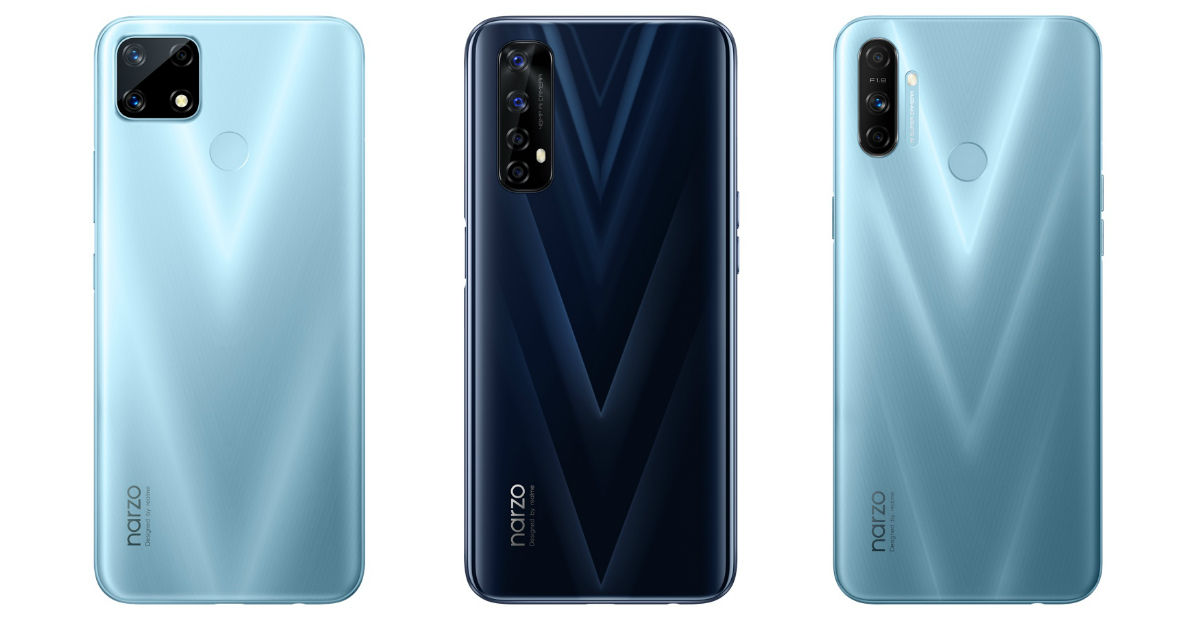 The Realme Narzo 20 price in India is set at Rs 10,499 for the 4GB RAM and 64GB storage variant, while the 4GB + 128GB variant costs Rs 11,499. The handset comes in Glory Silver and Victory Blue colour option. The first sale of the Narzo 10 is on September 28th starting at 12 PM on Flipkart, Realme.com, and retail stores.

Starting with Realme Narzo 20 specifications, it sports a 6.5-inch HD+ display. The handset is powered by the MediaTek Helio G85 chipset coupled with 4GB RAM and up to 128GB storage. For photography, the Realme Narzo 20 sports triple rear cameras comprising 48MP (f/1.8) primary sensor, 8MP 119-degree ultra-wide sensor, and 2MP (f/2.4) macro sensor. The front camera of the phone gets an 8MP snapper for selfies and video calling.

Software-wise, the phone runs Android 10-based Realme UI out of the box. The handset houses a beefy 6,000mAh battery and supports 18W fast charging. Other features include a rear-mounted fingerprint sensor, a dedicated microSD card slot for storage expansion (up to 256GB), and connectivity options such as 4G LTE, Wi-Fi, Bluetooth 5.0, GPS/ GLONASS, and Type-C port for charging. The Realme Narzo 20 measures 164.5mm x 75.9mm x 9.8mm and weighs 208 grams.

The Realme Narzo 20 Pro is a souped-up version of Realme Narzo 20. The handset rocks 6.5-inch FHD+ punch-hole display with a 90Hz refresh rate. At its core lies MediaTek Helio G95 SoC. The handset sports a quad-camera setup at the back with the same setup as the Realme Narzo 20 and a dedicated 2MP B&W portrait sensor. At the front, the phone gets a 16MP camera for selfies and video calling. The handset comes with two RAM and storage configurations: 6GB + 64GB and 8GB + 128GB.

The Realme Narzo 20 Pro packs a 4,500mAh battery and supports 65W SuperDart charging solution (over Type-C). The handset has a side-mounted fingerprint scanner for security. As for the dimensions, the phone comes in 160.3mm x 70.4mm x 8.4mm and weighs 198 grams.

The budget Realme Narzo 20A has a standard 60Hz 6.5-inch HD+ screen. The handset is powered by the Snapdragon 665 SoC coupled with up to 4GB RAM and 64GB user-expandable storage (up to 256GB). For photography, the phone is loaded with a 12MP + 2MP + 2MP AI triple camera setup at the back and an 8MP snapper on the front selfies and video calling. The Realme Narzo 20A is driven by a 5,000mAh battery and has a rear-mounted fingerprint scanner for security. The phone’s software and connectivity features, except for the Type-C port, remain the same as the Realme Narzo 20. The handset measures 164.4mm. x 75.4mm x 8.9mm and weighs 195 grams.

Redmi Note 9 first sale in India today: where to buy, price, and specifications