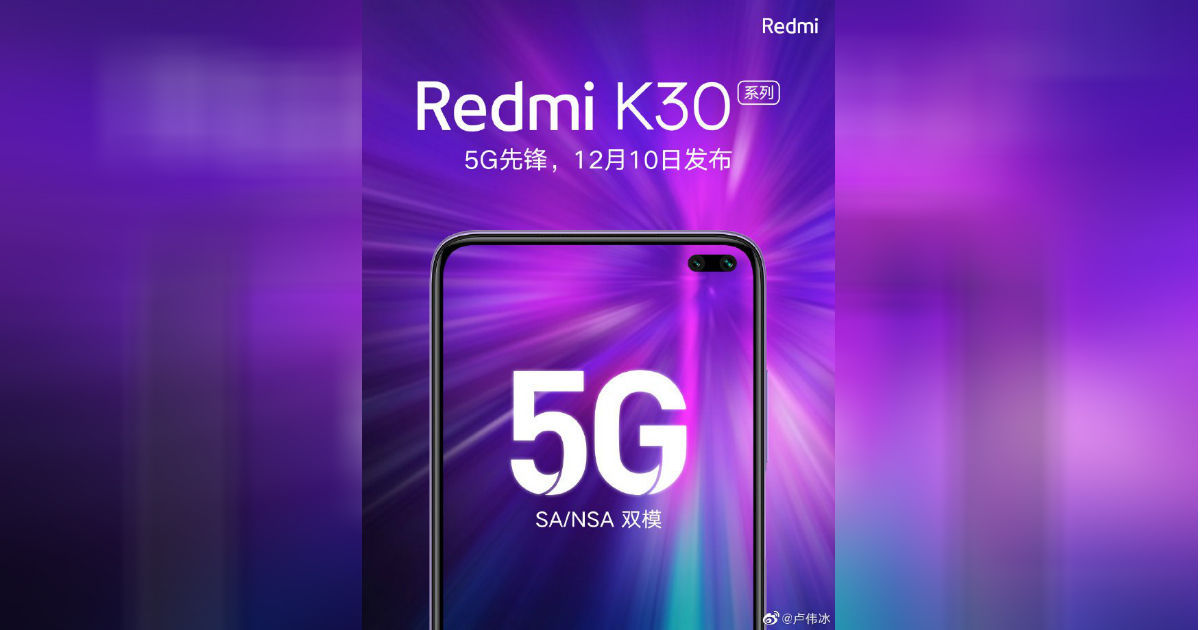 Alleged Redmi K30 4G specifications and live images have surfaced online, revealing some key details about the upcoming smartphone. The latest Redmi K30 leak comes via tipster Sudhanshu Ambhore, who tweets that the Redmi K30 will come with a 120Hz refresh rate, a side-mounted fingerprint sensor for security and will have NFC connectivity as well. Xiaomi is scheduled to announce the Redmi K30 in China on December 10th. Alongside a 5G variant, Xiaomi is also expected to launch a 4G version of the Redmi K30 for non-5G markets like India.

According to the tipster, key specs of the Redmi K30 will include a 6.6-inch IPS LCD display with dual punch-hole design to accommodate the selfie snapper, a Snapdragon 730G SoC in multiple RAM and storage variants, and Android 10 with MIUI 11 on top. Meanwhile, camera specifications could include a 60MP Sony IMX686 primary sensor, an 8MP telephoto sensor, a 13MP wide-angle lens and a 2MP depth sensor. On the front, the smartphone will feature a dual selfie camera cutout that will house a 32MP standard sensor and a ToF sensor with 3D face recognition. Redmi K30 is tipped to house a 5,000mAh battery with 27W fast charging support.

The frame is basically the same, that is, the hole positions are on the upper right and the upper left, which is almost a mirror image. Which one do you think looks better? pic.twitter.com/rxtu7VH6Js

Separately, Twitter user Xiaomishka has leaked hands-on images of Redmi K30 alongside Honor V30 comparing the design. The image reiterates the punch-hole display and slim bezels on all corners of the Redmi phone. The rear design was recently shared by another Twitter TechMate, which suggests the Redmi K30 would have a circular camera module that houses four sensors. Redmi K30 price could be set at RMB 2,000 (around Rs 20,400) in China for the 4G model, while the Redmi K30 5G may ship with Snapdragon 735 5G and might start upwards of RMB 2,500 (around Rs 25,400).