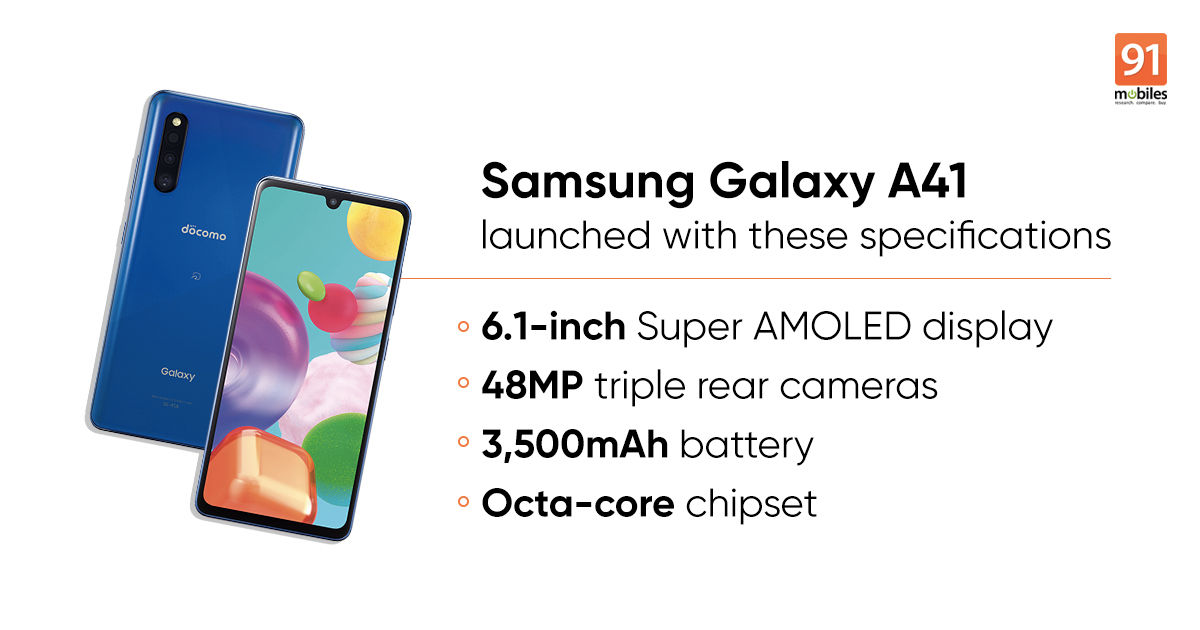 Samsung Galaxy A41 smartphone has been quietly launched in Japan. The handset, which succeeds the Galaxy A40, comes with a slew of upgrades. The Galaxy A41 touts a prism-cut design much like the Galaxy A51, and compact and slim form factor. Specifications also include a Super AMOLED display, 48MP triple rear cameras, and a 25MP front camera, among other things. While Samsung is yet to announce Samsung Galaxy A41 price, the phone will be available in Blue, White, and Black colour options from June 2020 in Japan. No word yet on the Galaxy A41 India launch, but it is expected since the Galaxy A51 and Galaxy A71 have been released in the country.

The Samsung Galaxy A41 sports a 6.1-inch Infinity-U display of Super AMOLED variety that bears Full-HD+ resolution and 20:9 aspect ratio. The handset has an octa-core CPU of an unknown maker coupled with 4GB RAM and 64GB storage onboard at its core. For photography, the phone rocks a triple-rear camera setup, which comprises of 48MP primary sensor with f/2.0 + 8MP ultra-wide-angle with f/2.2 + 5MP depth sensor. The front camera of the Samsung Galaxy A41 bears a 25MP shooter with f/2.2 for selfies and video calling.

Samsung Galaxy A41 specifications include a 3,500mAh battery and 15W fast charging support. Additionally, the phone is IP68 water- and dust-resistant certified, features an in-display fingerprint scanner, and measures 70mm in width. While it’s not confirmed yet, the handset will most likely come pre-loaded with Android 10-based One UI 2.0 to take care of software side of things.