“The Samsung Galaxy M10 is the company’s entry-level offering in the new, Galaxy M line of budget smartphones.”

Ever since Samsung announced a rehash of its smartphone lineup nomenclature, we have been expecting to catch word of its new, entry-level Galaxy M series of smartphone. Now, for the first time, the Samsung Galaxy M10 has been leaked, and subsequently removed, on Geekbench. According to the leaked Geekbench screenshot, the Galaxy M10 will be powered by Samsung’s own Exynos 7870 octa-core SoC, with peak clock running at 1.6GHz. Alongside, the screenshot also shows 3GB of RAM onboard, and Android Oreo 8.1 on-board. 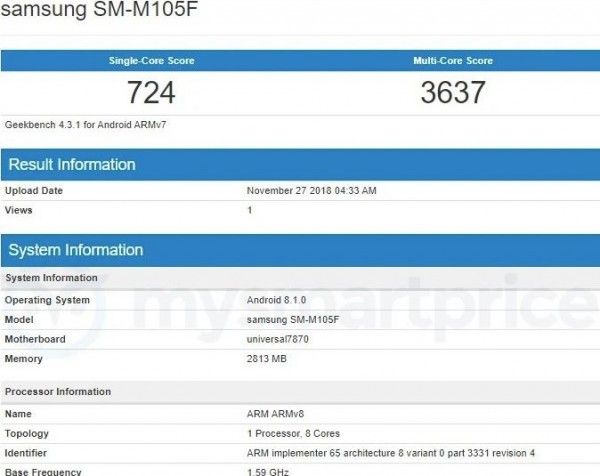 The upcoming Samsung Galaxy M series of phones are set to replace the Galaxy On series, which previously served as Samsung’s most inexpensive offerings. This lineup is reportedly being aimed at markets in Middle East, Africa and Asia, while new, budget devices in the Galaxy A series are said to be in development, to serve as budget offerings in Europe. The Samsung Galaxy M series has also been said to come with double-digit nomenclature — Galaxy M10, M20 and M30, instead of M1, M2 and M3. Exactly how this is expected to boost the company’s portfolio in future, is not yet clear.

As per leaked information, the Samsung Galaxy M10 is expected to house 16/32GB of internal storage, while the M20 is expected to come with 32/64GB storage options. Despite being aimed at the budget tiers, the Samsung Galaxy M30 is still said to feature 64/128GB of storage options, and may possibly feature in the upper-budget range of devices in India. A previous leak also suggests that the Galaxy M10 (and the other two models in this lineup) will come in two colour variants — blue and dark gray.

Upon launch, the Galaxy M range of devices will be up against the likes of Nokia, Xiaomi, Huawei and Vivo, among others. While pricing has not yet been specified, Samsung may look at aggressive pricing point, as well as its robust offline network, to make its new entry-segment lineup a success in India.