“Samsung Galaxy Note10 Pro doesn’t seem to be much different from the standard model in terms of design, except for the additional 3D ToF camera module on the back”

With the launch of the Galaxy S10+, the lines between Samsung’s flagship Galaxy S and Galaxy Note series started blurring. Therefore, it’s no surprise that the company is rumoured to be working on a larger Galaxy Note10 Pro model that will be positioned above the ‘regular’ 6.3-inch Galaxy Note10 handset. While we yesterday brought to you the exclusive renders of the latter, Pricebaba has partnered with @onleaks to bring to us a look at what the first Pro model in Galaxy Note series would look like.

According to the high-resolution renders and 360-degree video, the upcoming Samsung Galaxy Note10 Pro will have a design quite similar to that of the Galaxy Note10. On the front, we can see the same curved display with a centre-aligned punch-hole for the selfie camera. The bezels on the sides, the top, as well as the bottom seem to be equally narrow. A thin earpiece is located on the top, right above the display. In line with previous leaks, the Pricebaba report says the Samsung Galaxy Note10 Pro will have a 6.75-inch screen, with an in-display fingerprint sensor.

On the back, we can see the Pro model has three camera sensors aligned vertically towards the left side. However, it will have an edge over the standard Galaxy Note10 in the form of a 3D ToF module, with both units placed below the LED flash. Other than the camera setup, the back panel only has the Samsung logo since the fingerprint sensor has been done away with.

Moving on to the sides, we can see antenna lines on both the top as well as the bottom on both the edges. The physical volume and power buttons are located on the left edge, with the dedicated Bixby button given a miss here too, just like it is on the smaller sibling. At the bottom are the USB Type-C port, speaker grille, cutout for the S Pen, and mic, while the top edge has a mic, infrared sensor, and SIM tray. There is, of course, no 3.5mm earphone jack on the Galaxy Note10 Pro, just like the rumour mill suggested.

Other details about the upcoming Samsung flagship revealed by the report include the dimensions, which have been tipped as 162.6 x 77.4 x 7.9mm in size (8.3mm thickness if you include the rear camera bump). It also says the handset will feature a very thin metal frame that becomes thicker around the buttons, just like we saw on the Samsung Galaxy S10 5G.

The render below shows the differences between the Galaxy Note10 and its Pro counterpart, with the screen size obviously setting them apart from each other. There is also the extra 3D ToF sensor on the back of the bigger model that is apparent, while the smaller handset has relatively thicker bezels on the top if you look closely. 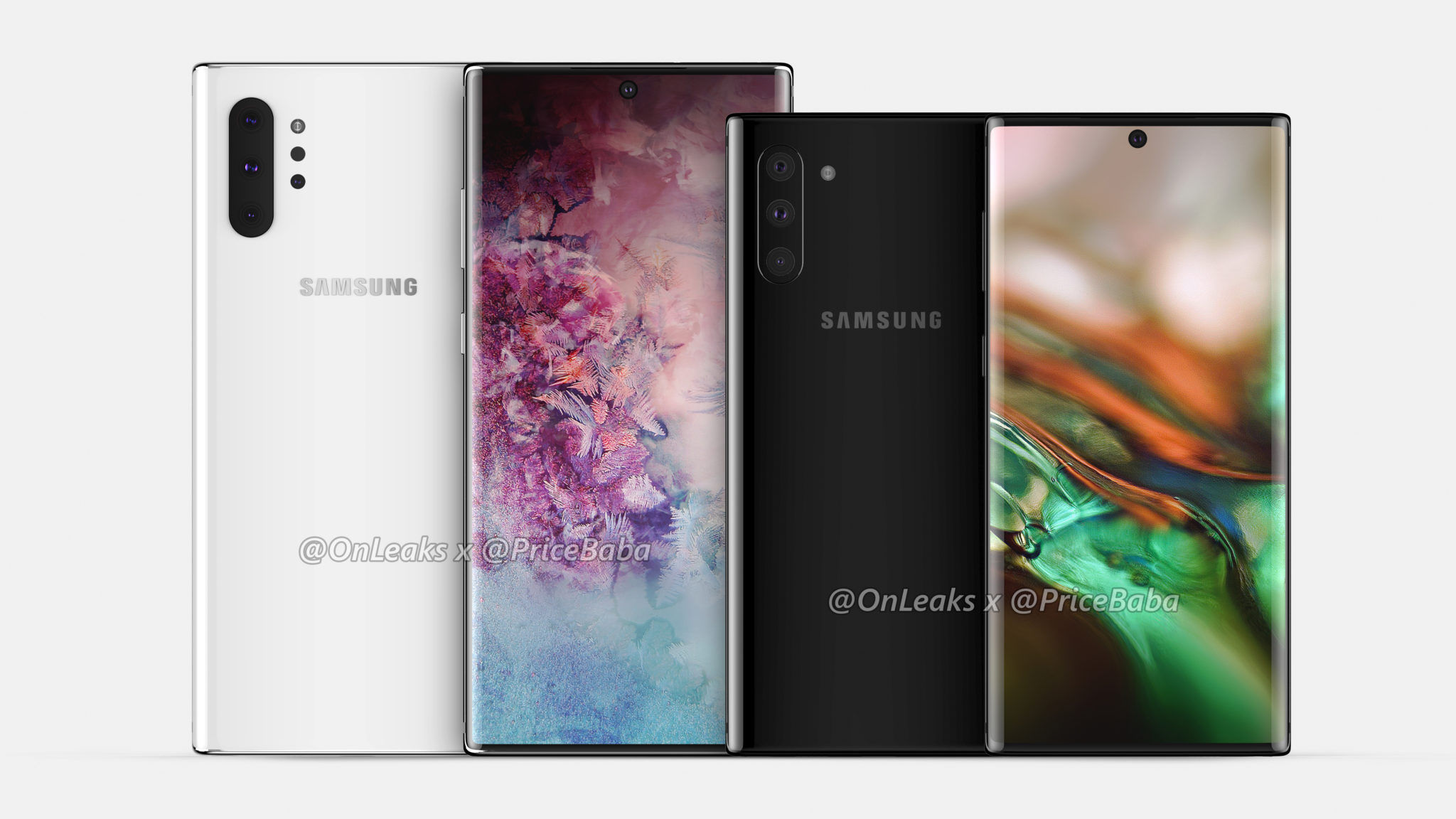 According to previous leaks, the main difference between the two models will be in the display, camera, and battery departments. The Pro is tipped to get a bigger 6.7-inch display, four rear camera sensors, and a beefier 4,500mAh battery with 45W fast-charging support compared to its smaller sibling’s 6.3-inch panel, triple rear camera setup, and a relatively smaller battery with slower charging tech. The former is also likely to feature the newer, faster UFS 3.0 flash storage as well as 19:9 aspect ratio.

Other than these, there could also be a Galaxy Note10e smartphone in the pipeline, with a non-curved display and a smaller, 3,400mAh battery. Barring the RAM/ storage configurations, which are unknown at the time, the other aspects of the upcoming Galaxy Note10 series smartphones should be the same, including the Snapdragon 855/ Exynos 9820 SoC. Of course, a 5G variant of Galaxy Note10 series has already been confirmed for the US market by Verizon. A recent leak suggests the Galaxy Note10 price will be around $1,000-1,200 (about Rs 70,000-83,000). It will reportedly come in Black, White, Silver, Red, Pink, and gradient blue and silver hues.