91mobiles.com
Home Comparisons Airtel Rs 99 vs BSNL Rs 97: Which is the best prepaid... 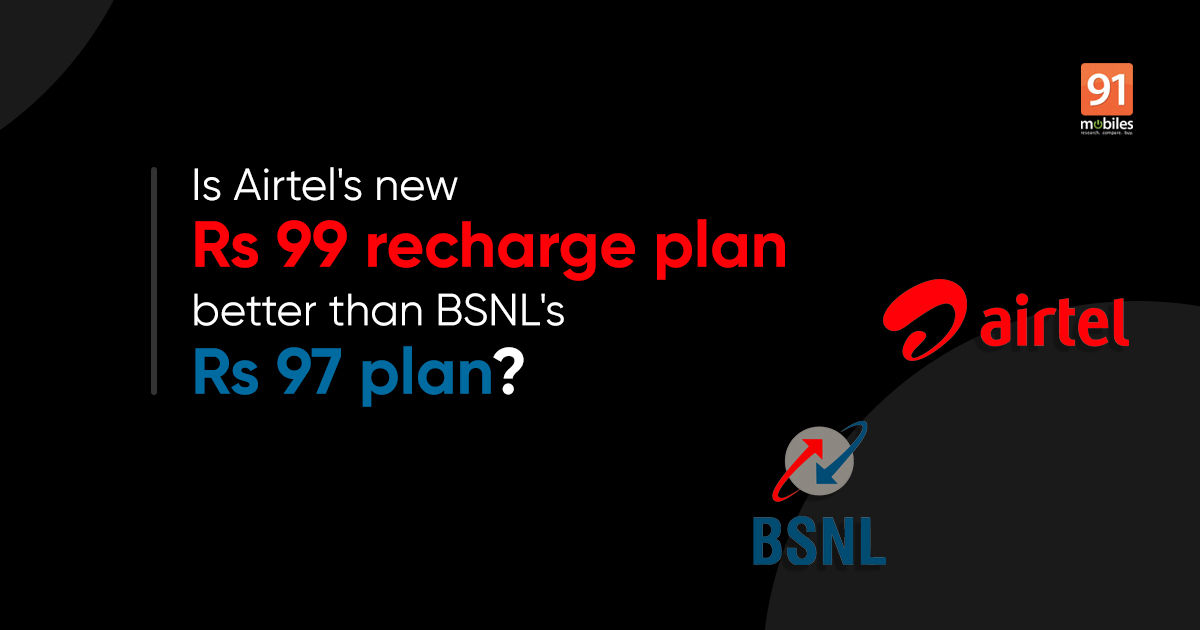 Bharti Airtel increased the price of its prepaid recharge plans this week. After the hike, the base prepaid plan earlier priced at Rs 79 now costs Rs 99. The increased prices will be effective from November 26th. Airtel says that the price was increased to keep the business profitable. According to the telecom operator, the company has always kept an average mobile revenue per user at Rs 200. However, the telco notes that the average revenue per user needs to be at least Rs 300 to offer a reasonable return on capital for a financially healthy business model. More returns would allow Airtel to roll out the 5G network in India soon.

The new Rs 99 prepaid plan offers the same benefits as the Rs 79 plan. BSNL also offers a plan priced similarly at Rs 97. So, let’s check out which one’s the best among the two and which telecom operator offers the best value for your money.

The Airtel Rs 99 prepaid plan comes after the recent price hike from the company effective from November 26th. The Rs 99 Airtel prepaid plan will give users 99 minutes of talktime. Further, users would be charged 1 paisa per second for voice calls. Meanwhile, BSNL offers free unlimited calls until validity lasts. The Rs 99 Airtel prepaid plan comes with a validity of 28 days, while the BSNL Rs 97 plan has 18 days of validity. The unlimited calling is applicable for STD and roaming as well.

Airtel offers 200MB of data for 28 days with its new Rs 99 prepaid plan. In comparison, BSNL’s Rs 97 prepaid plan comes with 2GB of data per day for a period of 18 days. Further, the data speed will be reduced to 80Kpbs after a user reaches 2GB per day data cap in the Rs 97 BSNL plan.

Unlike the higher valued plans, the Rs 99 Airtel prepaid plan doesn’t offer complementary services. If you want to avail free access to services, you would have to recharge your number with higher valued plans. Meanwhile, BSNL’s Rs 97 plan comes with complimentary access to Lokhdum content.

However, unlike Airtel’s Rs 99 plan, the Rs 97 plan from BSNL isn’t available in every region. BSNL subscribers from Andaman & Nicobar, Himachal Pradesh, Ladakh, and J&K can’t avail themselves of the Rs 97 plan.

Verdict: Which is the best recharge plan under Rs 100?

BSNL’s Rs 97 plan emerges as the best deal in every circumstance. For Rs 97, BSNL offers 2GB of data every day, unlimited calling and 100 SMSes for 18 days. However, the plan is not available in every region, and in that case, you can opt for other telcos such as Jio which offers much better benefits than Airtel’s Rs 99 prepaid plan.