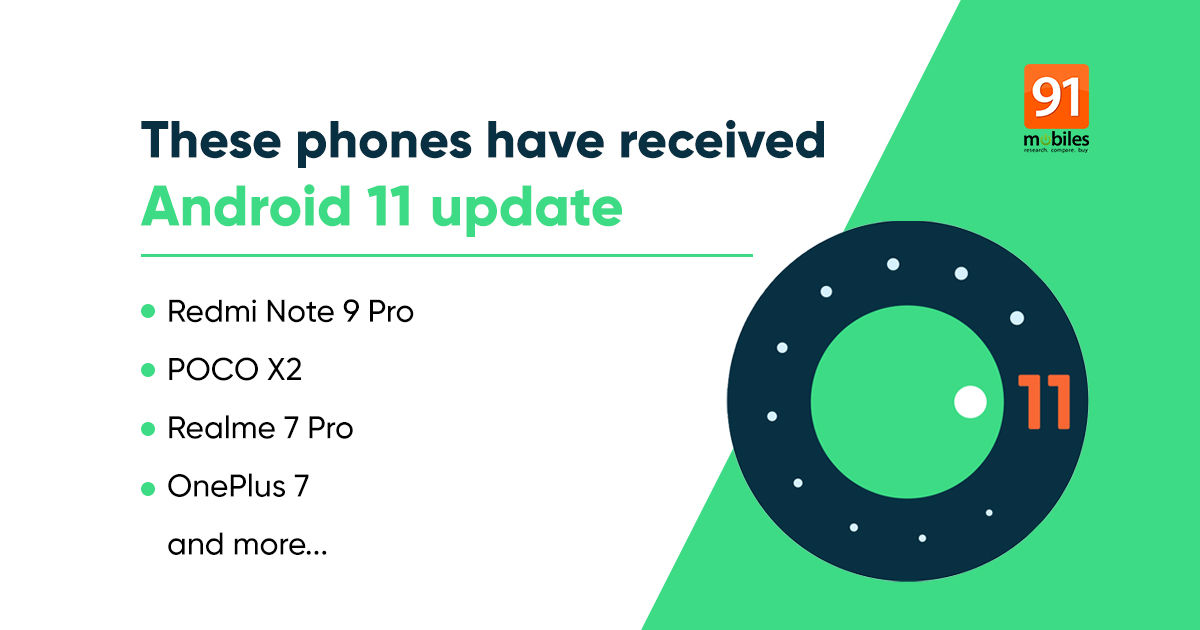 Google officially released Android 11 for Pixel phones in September last year. Now more than 8 months after its rollout, handset makers continue to struggle with pushing the new version for their devices. While some of them have got it, the likes of Nokia have been severely hampered because of the pandemic globally. Stable roll out of Android 11 update continue to make their way in India and we have compiled a list of devices from brands like OnePlus, Samsung, Xiaomi, OPPO, and more that have received the Android 11 update in India.

Phones that have got Android 11 update in India

OPPO does not figure among reliable names when it comes to pushing the latest Android updates. However, the company has looked to changed that situation with a more proactive approach with its update cycle over the past few quarters. It has streamlined the process of rolling out beta versions to testers. And within a short space of time, the stable version is ready for a public release. The results have been encouraging to say the least, and these are some of the devices that have already got Android 11 update in India.

Samsung has changed its stance on software update over the past few years and this refreshing change is a good sign for users. The new outlook has meant that most of its mid-range and premium devices get updated in regular intervals. This is why the list below looks fairly impressive, even if you consider there are so many Galaxy devices that are still to get Android 11 update. Samsung has redesigned the One UI interface to make it slicker.

The Samsung Galaxy Galaxy A20 received the Android 11 update in June 2021.

Moving to OnePlus and going by its track record, one would assume that most of its existing devices have got the Android 11 update. While the usual timeline for OnePlus phone updates used to be quicker, we are just pleased to see existing OnePlus users getting a taste of Android 11, before the next version comes out.

OnePlus 7 and 7T series got their stable Android 11 update in March this year. The beta rollouts happened few months before that. After a long wait, OnePlus 6 and 6T users got their Android 11-based Oxygen OS update in August.

Realme has launched a lot of phones over the past 6 months in the country. But in addition to that, they continue to focus on upgrading the software for their existing models. The company has been working on Realme UI 2.0 version for quite some time and now it has started pushing it for older models with the Android 11 update. The new version of UI promises a cleaner interface with less bloatware and an improved focus on the security and privacy of users. Realme already confirmed that the Realme 5 and Realme 5s phones from its lineup will not get the Android 11 update.

Xiaomi is another contender to consistently push new Android update for older devices in the market. Having said that, the list of devices that have got Android 11 update so far is a short one. You have the mid-range Mi 10i that launched early this year. Then you have the popular Redmi Note 9 and Redmi 9 devices. The majority of its devices have started coming with the Android 11-based MIUI version since the start of 2021. And the remaining Redmi Note and Redmi phones will be getting their share later this year.

Google is probably the only other brand after Apple to regularly offer new software updates for most of its devices. The Pixel series started many years back, and in 2020 we got the Pixel 5 devices. But apart from the original Pixel phones, all the other models have already got Android 11 updates.

POCO is another brand that has been slow with its software updates. The brand went independent last year, and that seems to have affected its business on all fronts. Granted, POCO has few devices in its lineup but even then the status of its existing devices needs a quick follow-up.

Asus has been notoriously slow with its software updates over the years. And the trend continues with its older devices. Even the popular ROG Phones are yet to receive Android 11 update. The only existing model that has got it till date is the ZenFone 6z which as you might recall is pretty old.

So, as you can see from the list above, the distribution of Android 11 among existing devices is still heavily in favour of few brands. You have the likes of Google, OPPO, and Samsung offering Android 11 updates to most of its devices available in the country. Then you have brands like OnePlus that have done a decent job meeting its Android 11 update promise. While you have brands like Xiaomi, Poco, ASUS, and a few more that are yet to fulfill their timelines.

But the most disappointing entry out of all this goes to Nokia. This company has heavily marketed being a pure Android device, offering fast updates. But the truth is, most of its devices from 2020 are yet to get the Android 11 update.

We will keep updating the list as and when more devices get Android 11 update in the country.