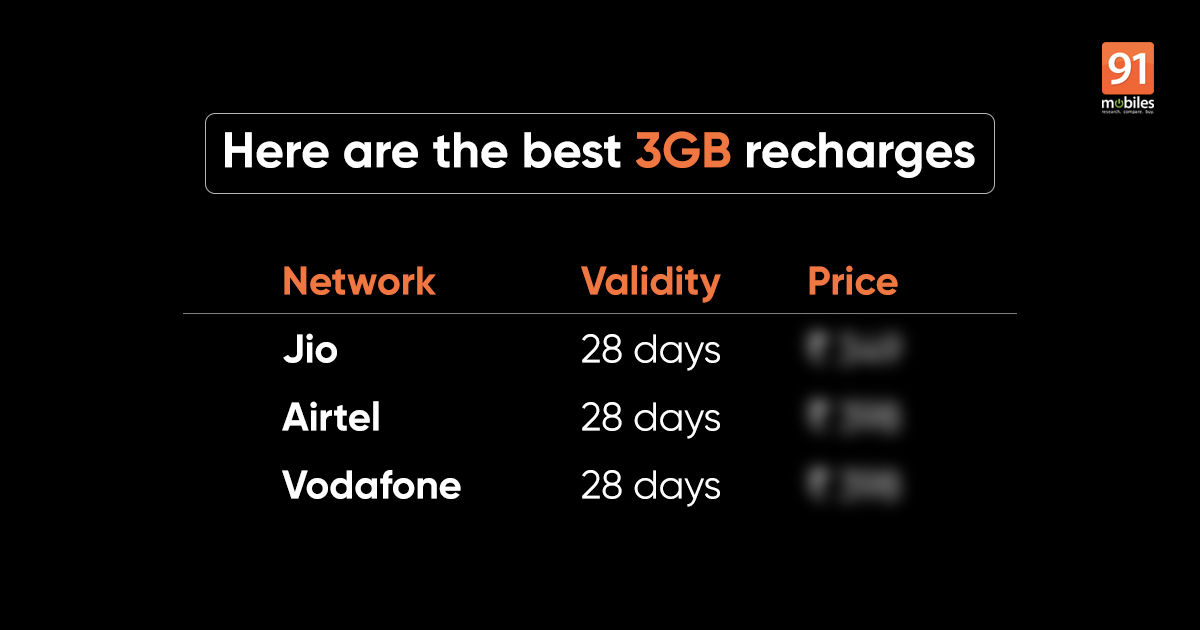 Vodafone, Airtel, and Jio all have dedicated packs that offer 3GB data a day to prepaid customers

Whether it’s working from home, exercising, or ordering groceries, almost every activity is being done online as the country stays home to flatten the coronavirus curve. However, in case, when broadband issues affect your daily tasks, mobile data is the only resort you have — thankfully, these 3GB plans from Jio, Airtel, and Vodafone have you covered. Even for extensive internet users, 3GB data for a day – which would sum up to 84GB data for a month – would be enough. Moreover, the 3GB prepaid recharge packs from Jio, Airtel, and Vodafone come with an affordable price tag, so you won’t have to worry too much about the cost of the additional data.

Jio’s Rs 349 recharge gives customers 84GB data a month, with a cap of 3GB per day. The recharge comes with a validity of 28 days and 1,000 minutes of non-Jio calling. Additionally, it’s also bundled with benefits such as unlimited voice calls, 100 SMSes per day, and free subscription to Jio apps. Just in case, if you manage to exhaust the 3GB data limit, you have the option to top-up with Jio data-only recharges, whose prices start at Rs 11.

Unlike Jio, Airtel has two prepaid packs in its portfolio that offer 3GB data a day. It starts at Rs 398, and apart from the 3GB data benefit, is bundled with a quota of 100 SMSes per day, unlimited voice calling, and access to Airtel Live TV app and Zee5. The pack is valid for 28 days. Then there is Rs 558 prepaid pack, which features almost the same benefits as the Rs 398 recharge but comes with 56 days validity.

Vodafone’s 3GB data prepaid pack varies according to the regions. It costs roughly around Rs 400 for 84GB data (3GB per day) for 28 days along with unlimited voice calling and free subscription to Vodafone Play and Zee5 streaming services. In addition to that, Vodafone has also introduced a double-data scheme, under which three prepaid packs from the telco are now offering at least 3GB data per day. The packs (again varying based on the regions) are priced at Rs 249, Rs 399, and Rs 599, which initially offered 1.5GB data for 28 days, 56 days, and 84 days, respectively. The double data benefit is valid only for a limited period of time.

The same benefits are applicable for Idea users as well.