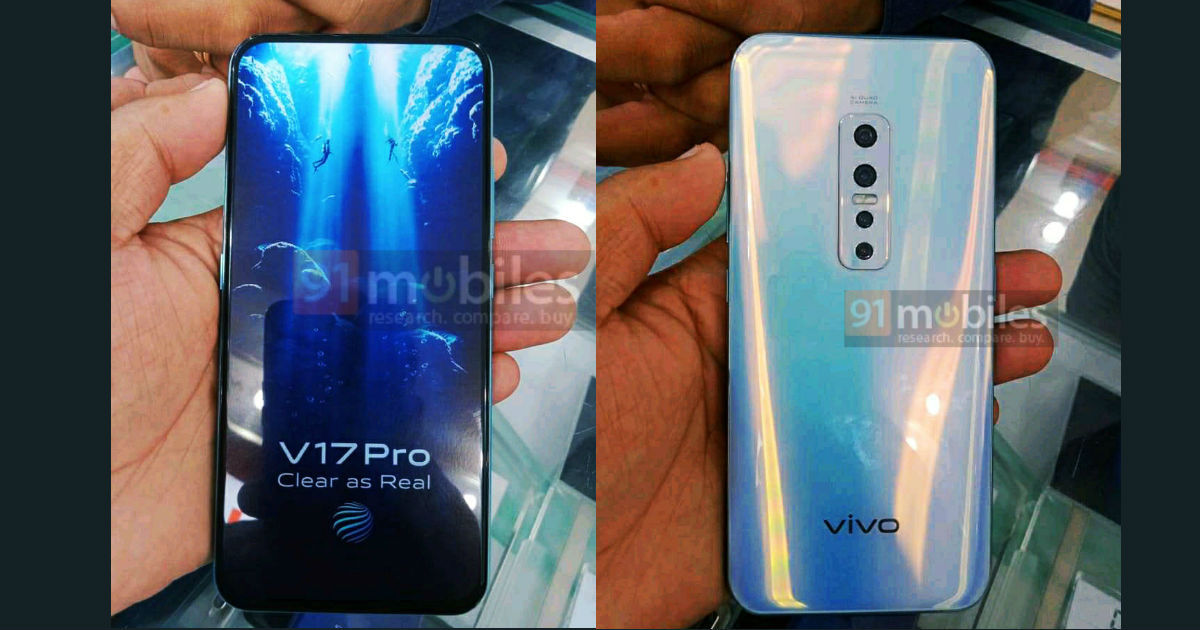 91mobiles has managed to get hands on Vivo V17 Pro smartphone’s real-life images through a reliable source ahead of the phone’s launch in India next week. The images reveal both the front and back panel of the upcoming mid-range offering from Vivo. As seen before, the fascia of the Vivo V17 Pro has an edge-to-edge screen with minimal bezels. Since the phone is coming with pop-up dual selfie cameras, there is no cut-out on punch-hole on the screen whatsoever. The fingerprint icon at the bottom of the V17 Pro’s display suggests an optical scanner for biometrics.

Talking about the Vivo V17 Pro’s back panel, it seems to have a glass layer and gradient sky blue hue. The quad-camera setup with LED flash is vertically aligned at the centre. There is also ‘Vivo’ at the bottom and ‘AI quad cameras’ etched above the camera module. Apart from the Sky Blue shade, the Vivo V17 Pro is also expected to come in Dark Blue colour options. As per the leaks and rumours, the handset is going to be Vivo’s first smartphone to pack as many as six cameras with 48-megapixel primary shooter.

The front camera of the phone has been tipped to employ 32-megapixel + 2-megapixel sensors for selfies and video calling. The successor to Vivo V15 Pro will be powered by Qualcomm’s Snapdragon 675 SoC, paired with up to 8GB of RAM and 256GB user-expandable storage.

The V17 Pro will reportedly feature a 6.59-inch Super AMOLED display with 1,080 x 2,440 pixels resolution, in-display fingerprint scanner, and scratch-resistant glass. Software-wise, the handset will most likely boot Android 9 Pie-based Vivo’s custom skin FunTouch OS out of the box. The entire setup would be driven by a 4,100mAh battery with fast charging tech. Lastly, the phone might get NFC, Bluetooth 5.0, Wi-Fi, dual SIM support, 3.5mm headphone jack, and Type-C port.