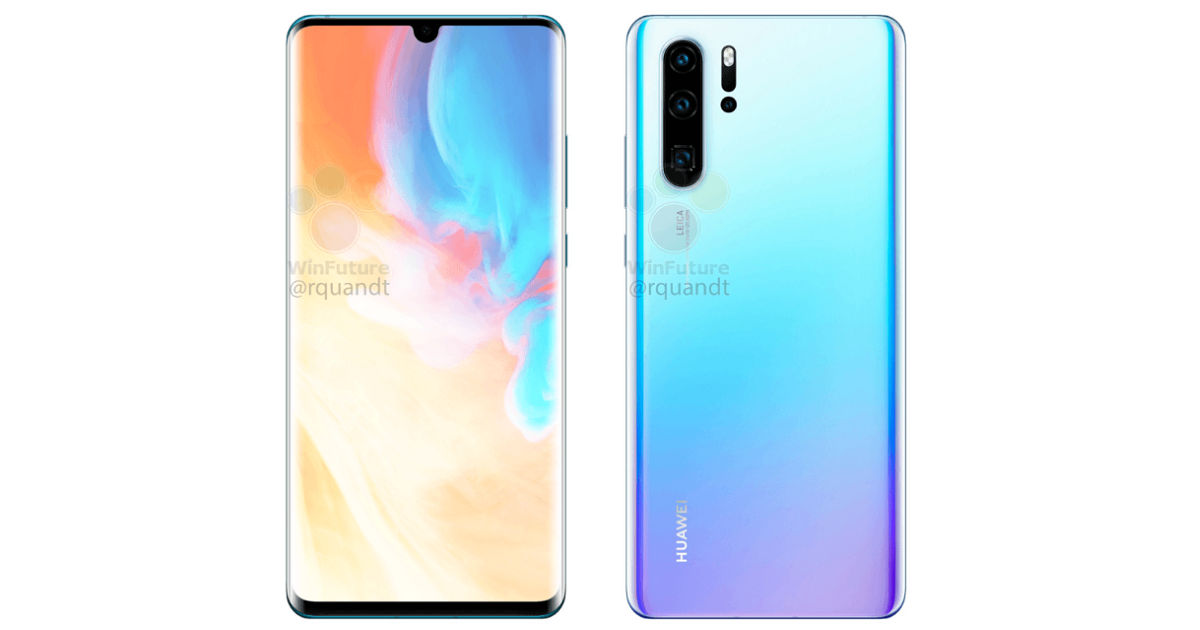 Huawei is all set to update its flagship P series with the launch of Huawei P30 and P30 Pro smartphones in Paris on March 26th. Ahead of that, the handsets have made a number of headlines – owing to leaks and rumours, and they are not stopping anytime soon. The alleged marketing renders of the Huawei P30 and P30 Pro have leaked by WinFuture — a trusted and reliable source. Notably, P30 Pro looks slightly different than its prototype that was leaked a couple of days ago – the phone will have LED flash beside the camera module instead of just below.

As seen from the image (above), the Huawei P30 and P30 Pro both will flaunt glass sandwich design with gradient finish. The handsets will have vertically-aligned triple rear cameras with dual LED flash. The third camera on both the devices is said to be a better zoom lens compared to their predecessors to capture a lossless image of the subjects placed at a distant. The Huawei P30 Pro is expected to extend its zoom range to 7.8x from the 3x on the P20 Pro (review), while the P30 will have a 4.7x zoom where the P20 had none.

Talking about the specifications, the P30 Pro will reportedly feature Leica Vario-Summilux-H-branded lenses and 16-125mm focal length and f/1.6-f/3.4 aperture lens. The handset is further tipped to a prism-based telephoto lens that could be similar to recently debuted on Oppo’s 10x-zoom 5G model. The Huawei P30, on the other hand, may employ 17-80mm focal length and aperture sizes f/1.8-2.4, while also using the Vario-Summilux-H lens.

Moreover, the fascia of both the devices will likely to flaunt a bezel-less screen with slight cut-out up top. While the Huawei P30 seems to have a flat display, the ‘Pro’ may come with a curved panel as seen on Huawei Mate 20 Pro. That’s all we know so far!

Going by the previous leak, there’s Huawei P30 Lite also in the making. Its specifications are also scarce at the moment, but it could come with a 6.15-inch notch display with 1,080 x 2,340 pixels resolution and Kirin 710 octa-core processor backed by either 4GB or 6GB RAM.