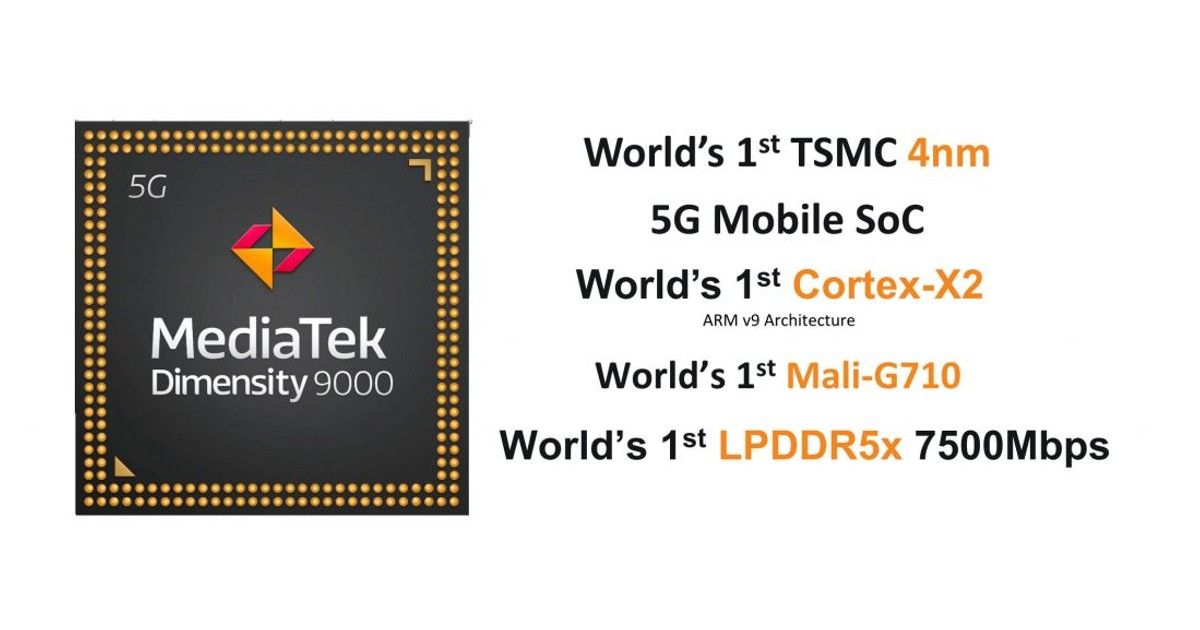 At the ongoing MediaTek Summit conference, the chipmaker giant announced the Dimensity 9000 chipset. It is the world’s first TSMC chipset built on the 4nm process. This is claimed to improve performance while also improving power efficiency. It is also the first chip to use a Cortex-X2 core clocked at up to 3.05GHz and is the world’s first smartphone chip to support Bluetooth 5.3. The new chipset comes with the Mali G710 GPU with 10-cores for graphics. MediaTek says there’s a new raytracing SDK for developers to bring new visual improvements that will get it closer to PC-level graphics performance. The first smartphone powered by the Dimensity 9000 will arrive by late Q1 globally.

The MediaTek Dimensity 9000 chipset is arranged in a 1+3+4 setup. Additionally, there’s a single Cortex-X2 “ultra core”, a cluster of 3X ‘super cores’ Cortex-A710 clocked at up to 2.85GHz, and a cluster of 4 efficiency Cortex A510 cores clocked at 1.8GHz. The chipset will support LPDDR5x RAM with speeds of up to 7500Mbps. There’s a 14MB cache. which according to MediaTek will improve the performance by 7 percent and bandwidth consumption by 25 percent when compared to just 8MB of cache.

It is the first chip to use a Cortex-X2 core clocked at up to 3.05GHz and is the world’s first smartphone chip to support Bluetooth 5.3.

Apparently, in the initial Geekbench scores, the Dimensity 9000 has surpassed scores of the ‘Android flagship’, probably with the Snapdragon 888, and had scores similar to the “2021 flagship” which indirectly could mean the latest A15 Bionic. Connectivity options include Wi-Fi 6E 2X2, Bluetooth 5.3, Bluetooth Audio LE-ready with “Dual-Link True Wireless Stereo Audio, and Beidou III-B1C GNSS standard. The Dimensity 9000’s ISP can capture 4K HDR video from three cameras at the same time. It can process a total of 270 frames per second to output an 18-bit 4K HDR video. The ISP also supports camera sensors of up to 320MP. The 5G modem complies with the 3GPP Release-16 standard. It supports sub-6Ghz 5G with maximum download speeds of 7Gbps with 3CC Carrier Aggregation (300Mhz).

It is also the only 5G model to support R16 UL Tx Switching for both SUL and NR UL-CA-based connections. It also brings improved power consumption for both active and standby 5G connections. MediaTek claims the Dimensity 9000 outshines Google’s Tensor chipset by 16 percent in AI performance.