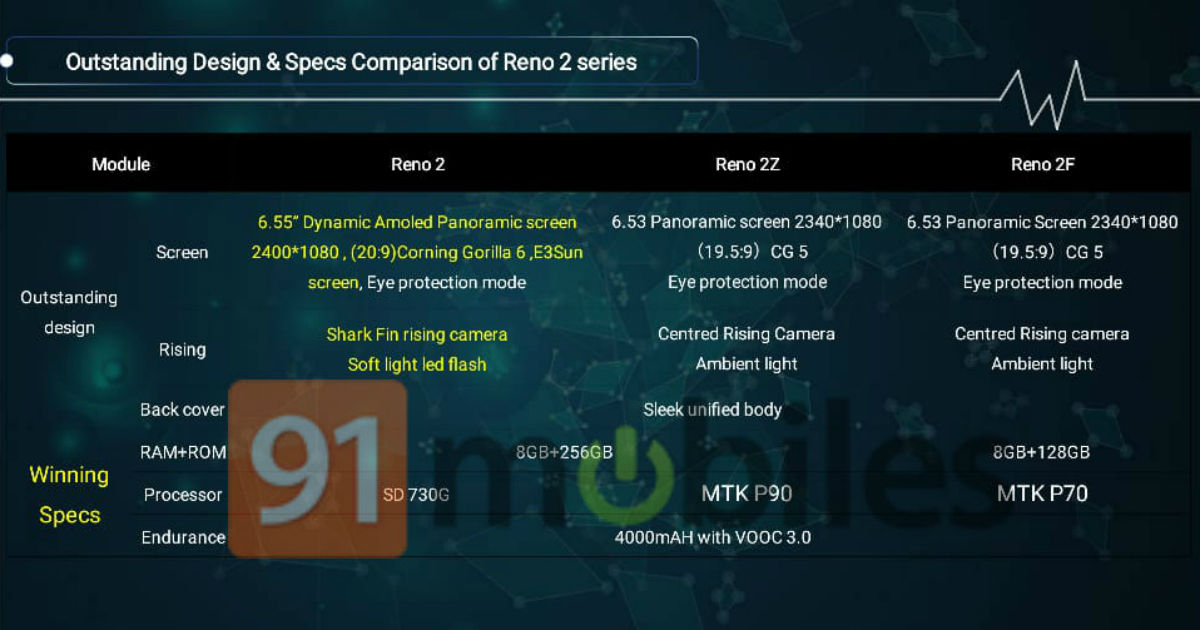 The OPPO Reno 2 launch event on August 28th is expected to see as many as four smartphones going official — the Reno 2, Reno 2Z, Reno A, and Reno 2F. While the details of the first three models have been leaked over the past week, the OPPO Reno 2F remains shrouded in mystery. Now, 91mobiles has sourced information about the key OPPO Reno 2F specifications. Along with that, the source has given us a few new details about the upcoming Reno 2 and 2Z smartphones.

Starting with the OPPO Reno 2F specifications, the smartphone will be the most affordable member of the new Reno 2 series. It’ll feature a 6.53-inch AMOLED screen with an in-display fingerprint sensor, 19:9 aspect ratio, full HD+ (1,080 x 2,340 pixels) resolution, and Gorilla Glass 5 protection. The display will also come with an Eye Protection Mode. The smartphone will be powered by the MediaTek Helio P70 processor, backed by 8GB of RAM and 128GB internal storage. 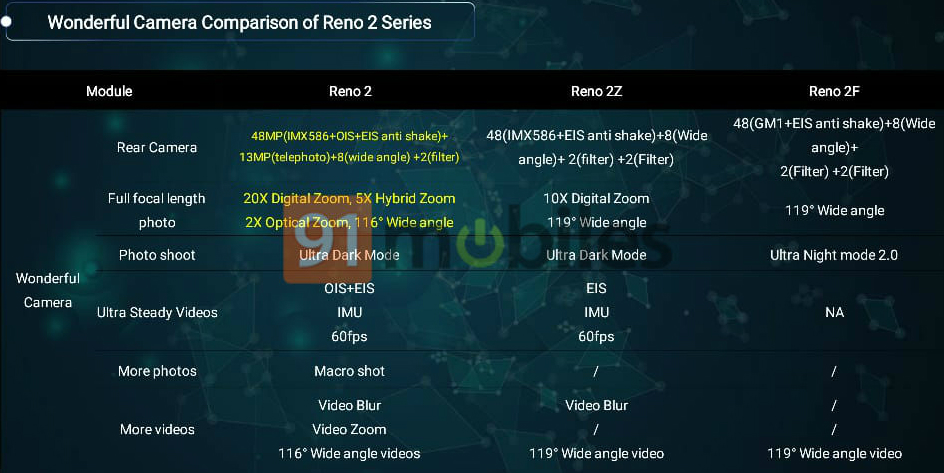 On the camera front, the OPPO Reno 2F smartphone will have a quad-camera setup, which will be headlined by a 48MP Samsung Bright GM1 sensor with Electronic Image Stabilisation. The sensor will be accompanied by an 8MP 119-degree ultra wide-angle lens and two 2MP sensors that support two new, exclusive design filters. It will support the Ultra Night Mode 2.0 (and not the Ultra Dark Mode that the Reno 2 and 2Z are getting). The camera will also support 10x digital zoom. The selfie camera will be placed in a pop-up module that is placed in the middle of the top edge — therefore, the handset will not feature the shark fin-like module seen in the Reno and Reno 10x Zoom models.

Moving on to the new details about the Reno 2, the smartphone will offer camera features such as 2x hybrid zoom, Macro Shot, Video Zoom, and two design filters. The Snapdragon 730G processor powering the handset will have a clock speed of 2.2GHz. Lastly, the handset will weigh 189 grams.

Previously, it was officially announced that the Reno 2 will have 6.55-inch AMOLED screen with 20:9 aspect ratio, 93.1 percent screen-to-body ratio, and an in-display fingerprint sensor. The smartphone will have 8GB RAM and 256GB storage and gamer-centric features such as HDR10 Gaming support, Game Assistant, anti-cheat extensions, and 25 percent better graphics. The selfie camera will be placed in a wedge-shaped pop-up module. A 4,000mAh battery with 20W VOOC 3.0 fast-charging will power the smartphone. Other key features of the smartphone officially revealed include 20x digital zoom, 5x optical zoom, USB Type-C port, Frame Boost 2.0, Touch Boost 2.0, and Link Boost.

Last in the list is the OPPO Reno 2Z. The source also shows the smartphone will have 10x digital zoom, Electronic Camera Stabilisation, Ultra Dark Mode, Video Blur, and two exclusive design filters. Its display resolution will be 1,080 x 2,340 pixels and aspect ratio of 19.5:9. The octa-core Helio P90 processor powering the smartphone will be running at 2.2GHz. The smartphone will weigh 195 grams. 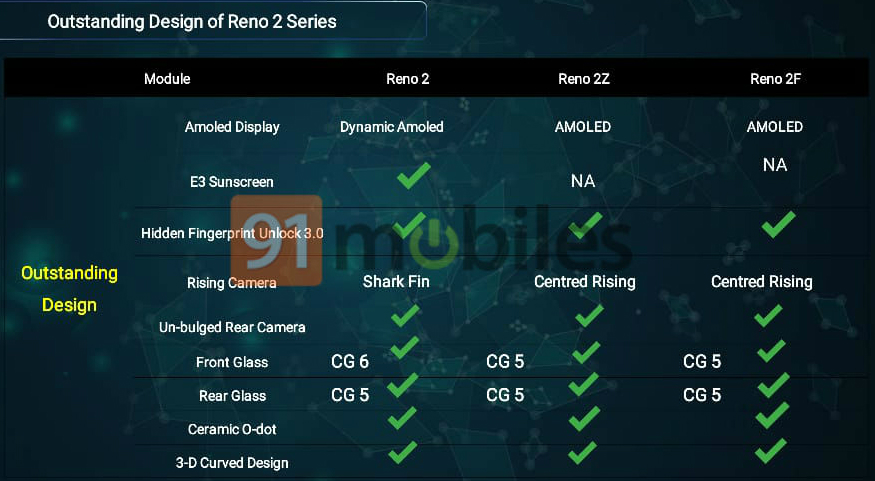