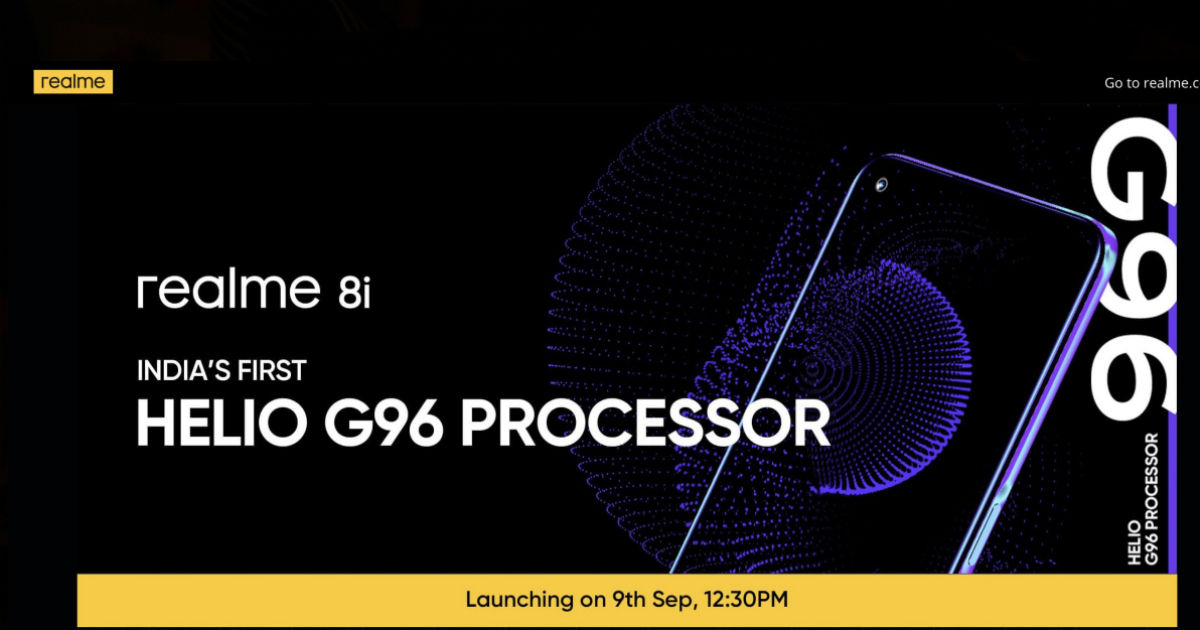 Realme 8i India launch date is September 9th at 12:30 PM IST, as confirmed by the company on Twitter just hours after revealing the Realme 8s will also debut on the same day. The Realme 8i will be India’s first offering with the MediaTek Helio G96 SoC, much like how the Realme 8s will be the country’s first phone with the Dimensity 810 chipset. Thanks to the recently leaked renders, we know how the phones will look like. These will be new additions to the company’s Realme 8 lineup. The Realme 8i comes as a successor to the Realme 7i.

There is a dedicated microsite on Realme’s website, which reveals some key specifications of Realme 8i. The handset will have a clock speed of up to 2.05GHz, ARM Mali G57 GPU, and an AnTuTu score of 350,391. The phone will have a 600nits peak brightness but what’s interesting is that it can go as low as 1nit when reduced. This is the company’s first screen to offer such functionality. The Realme 8i is expected to have a 120Hz refresh rate.

The Realme 8i is said to sport a 6.59-inch FHD+ display with a 120Hz refresh rate and punch-hole cutout for the selfie snapper. It is confirmed to be powered by the MediaTek Helio G96 chipset paired with Mali G57 MC2 GPU, 4GB RAM, and 128GB UFS 2.2 storage that will be further expandable via a microSD card. The phone is likely to boot Android 11-based Realme UI 2.0 custom skin out of the box. It is said to measure 8.6mm in thickness and weigh 194 grams.

Moving to optics, the Realme 8i is said to have a triple camera setup on the back, with a 50MP primary sensor, a 2MP portrait camera, and a 2MP macro camera. There will reportedly be a 16MP snapper for selfies and video chats and a side-mounted fingerprint sensor for security. Realme 8i is said to pack a 5,000mAh battery but details regarding its fast charging aren’t revealed at the moment.