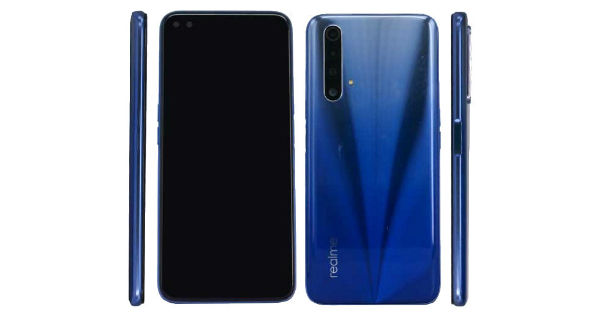 A Realme phone with model number RMX2142 has been certified by TENAA in China. While it isn’t confirmed, the handset is believed to be the Realme X3, a successor to the Realme X2 that was launched in December 2019. The TENAA listing has revealed the complete Realme X3 specifications while renders on the site show us what the smartphone will look like. The images reveal the phone will come with a dual punch-hole display and quad rear cameras. The handset is expected to come with a 5G chipset and will support dual-mode 5G connectivity. Apart from a standard Realme X3, the young brand is also tipped to be working on a high-end Realme X3 SuperZoom Edition that is said to come with a 108MP primary camera and Snapdragon 855 flagship SoC. According to the Realme X3 images on TENAA, the phone will sport a pill-shaped punch-hole design at the front to accommodate dual selfie cameras, while on the back we see a vertically arranged quad camera setup. There is a side-mounted fingerprint sensor for security, while the volume rocker is on the left. The design is identical to the Realme X50 5G that was introduced in China earlier this year.

As per the specifications listed on the Chinese certification site, the Realme X3 flaunts a 6.57-inch full HD+ TFT display with 2,400 × 1,080 pixels resolution and is powered by a 2.4GHz octa-core processor. However, the chipset name isn’t revealed yet. It is said to ship in three variants: 6GB + 64GB, 8GB + 128GB and 8GB + 256GB storage that should be further expandable via microSD card. The handset runs on Android 10, probably skinned with the Realme UI custom skin on top. The handset measures 163.8×75.8×8.9mm and weigh 192 grams. As for the cameras listed on TENAA, the Realme X3 will ship with quad cameras consisting of a 48MP primary sensor, an 8MP lens and a couple of 2MP sensors. On the front, it will have a 16MP primary sensor and a 2MP secondary lens. Connectivity features could include 5G, Wi-Fi, Bluetooth 5, GPS + GLONASS, and USB Type-C. The smartphone houses a 4,100mAh battery, but there is no mention of fast charging, although it is expected.