“The Galaxy A3, despite the high price, is a worthy option if you’re looking for a handy device in the mid-range segment”

With its latest Galaxy A series, the Korean giant is targeting all kind of users depending upon their screen preferences. We have already taken an in-depth look at the mid-rung of the new range, the Galaxy A5, which in sync with its name, bears a screen size of 5-inches. Other members of the family don’t follow the same naming convention, but include A5’s smaller sibling, the Galaxy A3 featuring a handy 4.5-inch display, and the Galaxy A7 (first impressions) sporting a large phablet-class 5.5-inch display panel. 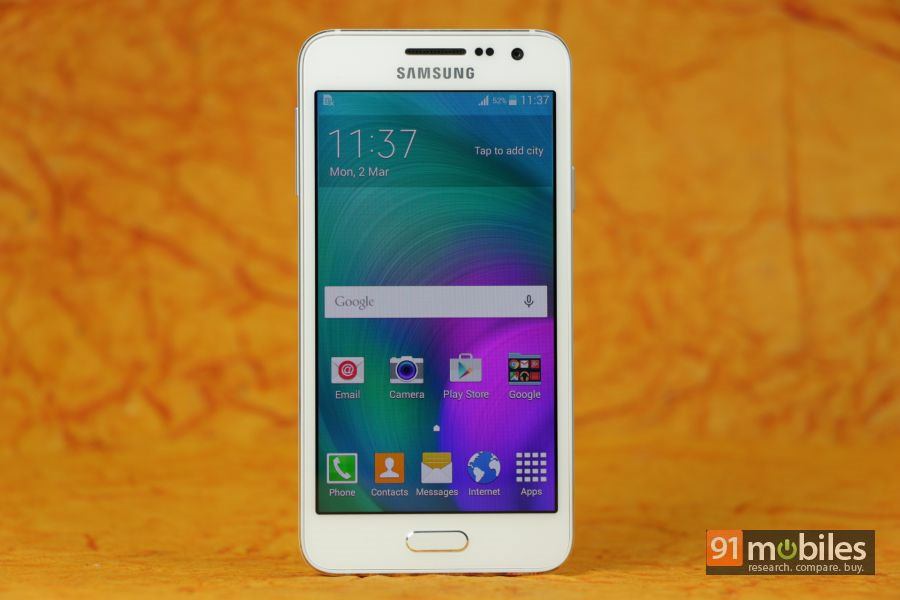 Interestingly enough, the A3 differs from the A5 mainly in terms of screen size and camera, but features a similar set of hardware. Since we have covered the Galaxy A5 comprehensively, discussing our hands-on impressions, camera performance, review and a quick pictorial review, we will not go into the details, but will be checking out how the A3 fares in day-to-day usage in this crisp review.

The Samsung Galaxy A3 is very similar to the Galaxy A5 in terms of its design and build quality. Samsung’s A series shares design cues, with only difference being screen sizes. The Galaxy A3 is a smaller version of the A5 and you’ll find the same unibody design and lightweight build that impressed us while reviewing its bigger brother. 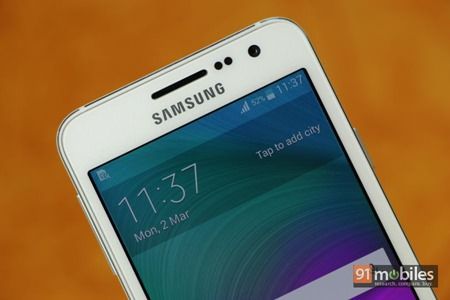 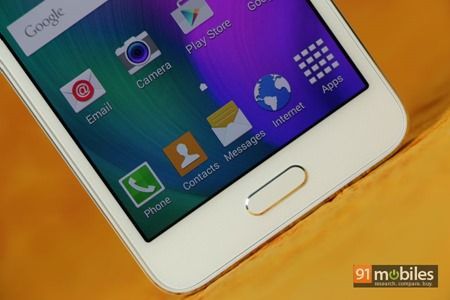 The front is dominated by the display panel, which is flanked by an earpiece, front-facing shooter and a few sensors above and Samsung’s standard physical home button sandwiched between two capacitive keys below. The right spine is home to the power button along with slots for inserting a pair of nano-SIMs, whereas the volume keys are available on the left. At the base, you’ll find both the 3.5mm socket and a micro-USB port. The device features a matte finish at the rear, which hosts a primary camera along with an LED flash and a speaker grille. 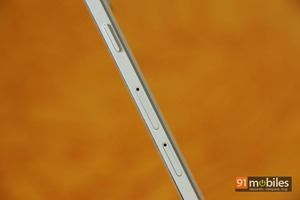 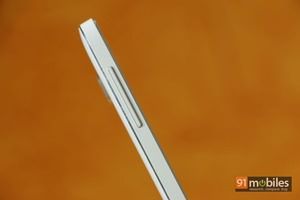 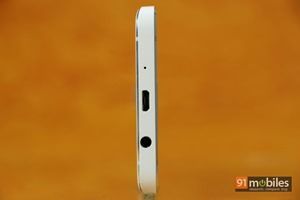 Packing a 4.5-inch display, the Samsung Galaxy A3 measures 130.1 x 65.5mm, making it ideal device for one-handed usage. Similar to its siblings, it’s quite lean as well with a waistline of 6.9mm. The device is available in a choice of colours like white, black, blue or gold. 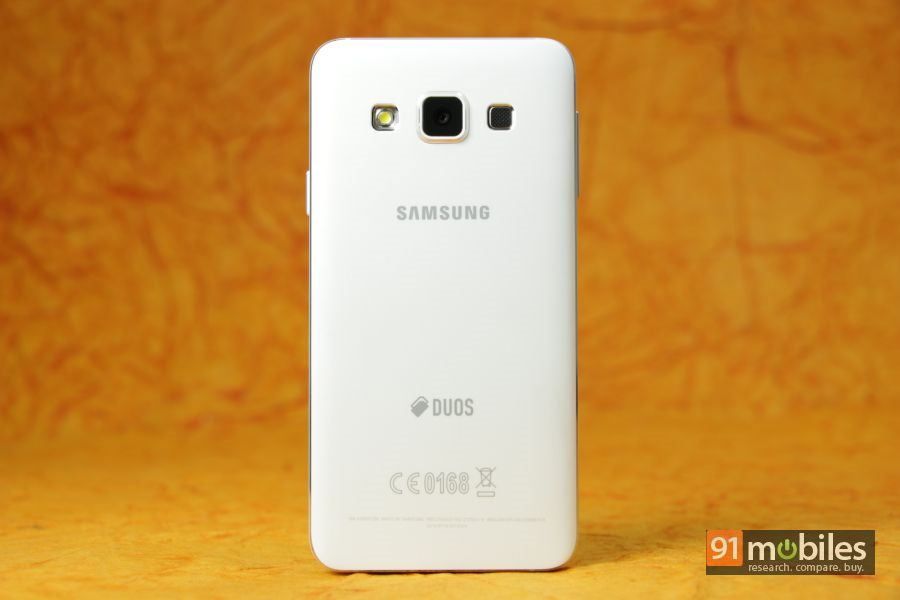 The handset features a 4.5-inch display which is based on Super AMOLED technology. We’ve reiterated the brilliant visuals offered by Samsung’s AMOLED tech, and the one on the Galaxy A3 doesn’t disappoint as well. The display has good viewing angles and ample brightness levels making it legible outdoors too. It looks sharp enough, but if you notice it from close quarters, then there’s pixelation visible, since along with the smaller screen size, the Korean brand has also lowered the resolution on the Galaxy A3 compared to its sibling, the Galaxy A5. Sporting a resolution of 960 x 540 pixels, the device bears a modest pixel density of 245ppi on its 4.5-inch screen. 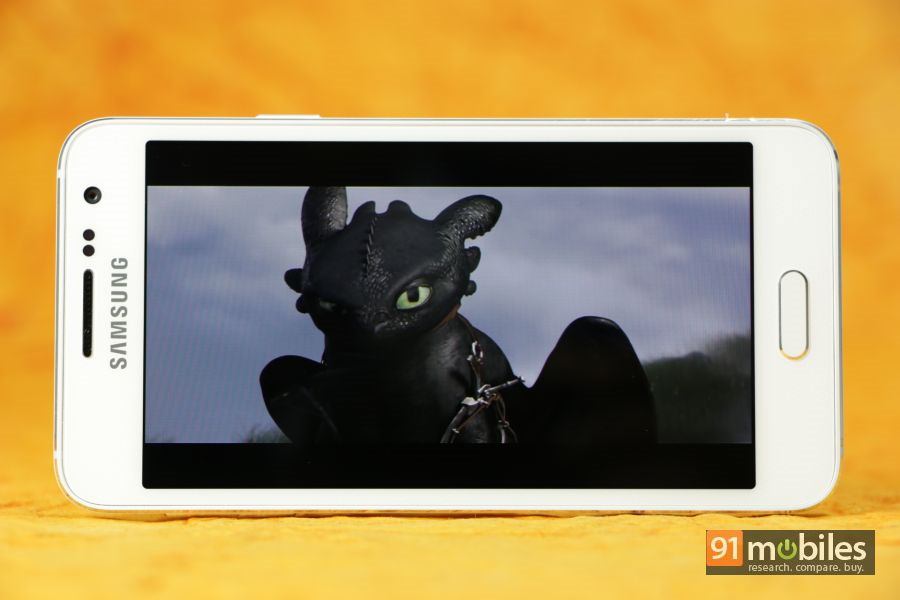 Protecting the display against scratches is Corning’s fourth-gen Gorilla Glass, which claims to be 80 percent shock resistant for safeguarding against drops.

Getting touchy-feely with TouchWiz 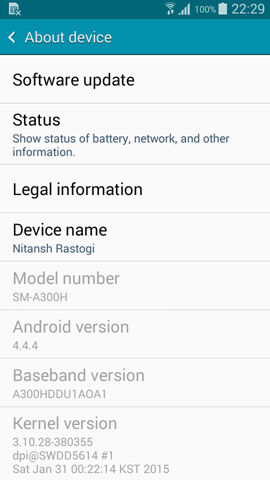 The software part on the Samsung Galaxy A3 is handled by brand’s custom layer TouchWiz, running atop Android 4.4.2 KitKat. The custom skin adds a lot of flavour and features to the stock interface of Google’s mobile platform. 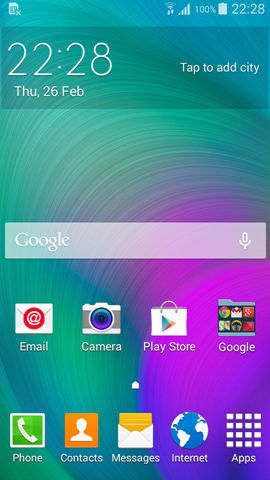 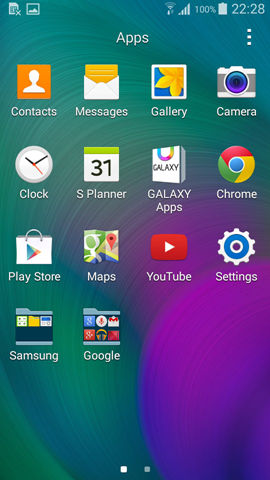 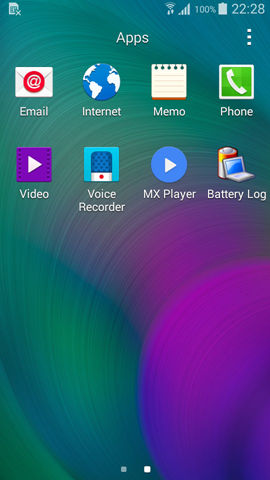 While the Galaxy A3 remains similar to its sibling in terms of design and largely the hardware too, it includes a toned-down version of TouchWiz UI. What this means is that you’ll get customisations in terms of interface and preloaded apps, but not Samsung’s premium features. There’s no multi-window functionality or support for gestures in the handset. However, you do get the ability to change themes on the device, or turn on the easy mode to get a simplified user interface. 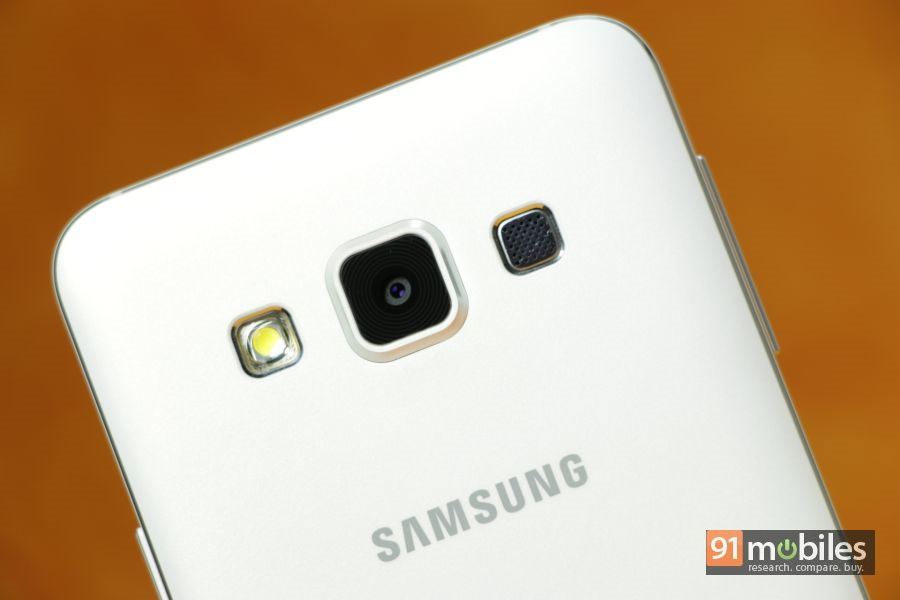 Unlike the 13-megapixel sensor available on the Galaxy A5, its sibling is adorned with a modest 8-megapixel snapper at the back. An LED flash module supplements the primary camera to assist shooting in dimly-lit environments. While Samsung has reduced the megapixel count of the rear camera, it has taken care of selfieholics since the device, just like its bigger and expensive siblings in the A series, sports a 5MP shooter at the front. The camera app on the smartphone is same as all Samsung’s offerings and offers a ton of options and modes.

While 8MP might seem low, especially when compared to competition, the shooter does the job well. It offers nice colour fidelity and close-up shots on the Galaxy A3 turn out quite nice. While the long shots were also decent, they turn grainy when zoomed in. Night shots, like most smartphone cameras, are quite noisy, though the LED flash does come to the rescue in poorly-lit conditions. Take a dekko at few shots captured by the main shooter of the Samsung Galaxy A3. 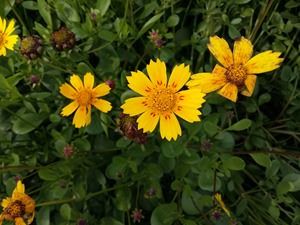 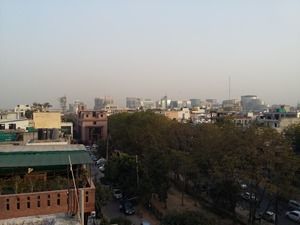 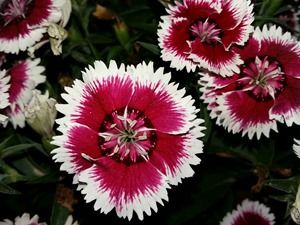 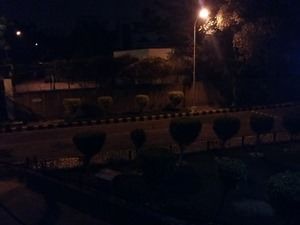 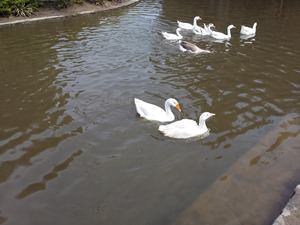 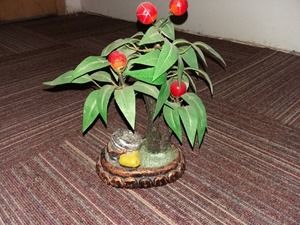 The 5MP front-facing camera is quite goodtoo,  as the images come out well and there are a number of options to enhance selfies. Here’s a sample shot taken from the front snapper on the Samsung Galaxy A3. 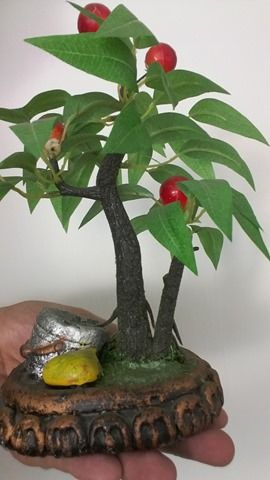 Similar to its bigger sibling, the Samsung Galaxy A3 relies on the Qualcomm Snapdragon 410 SoC for number crunching. The chipset offers four Cortex-A53 cores which are 64-bit compatible and run at the clock speed of 1.2GHz. The processor is complemented by the Adreno 306 graphics processor. The device gets half the RAM, i.e., 1GB, when compared to its sibling, but the processing combination is able to deliver fluid performance. The apps open quickly and we didn’t experience any lags while switching between them even when multiple apps were running in the background. 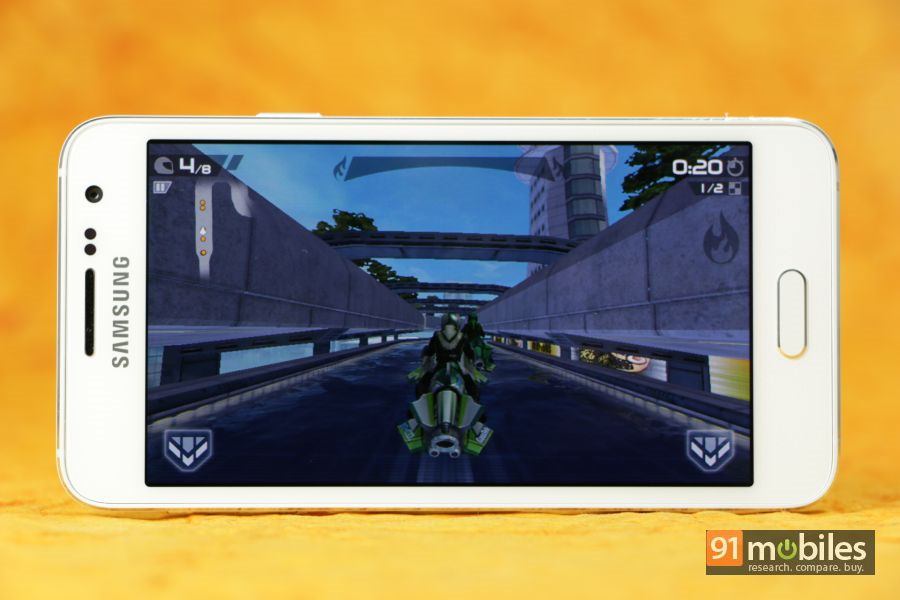 It’s gaming that pushes the boundaries of a device when it comes to performance, and the Galaxy A3 does a fine job. Playing casual titles like Angry Birds is a delightful experience, while graphically-demanding games such as Riptide GP2 run nicely, though you might hit a few frame drops in between. Graphics aren’t rendered smoothly either.

Taking care of the storage aspect on the Samsung Galaxy A3 is 16GB of flash memory, out of which users will be able to access around 11.7 GB. Thanks to the availability of an expansion slot, the storage can be increased by an additional 32GB. However, it must be noted that the expansion slot can either accept a memory card or a secondary SIM, which means you’ll have to sacrifice one for the other. Sadly though, the phone misses out on USB On-the-Go connectivity, which has become quite popular recently, allowing users the convenience of quickly plugging in flash drives directly on the phone. 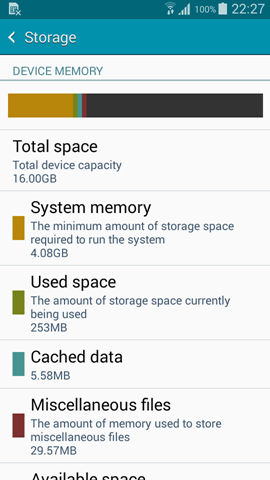 Connectivity-wise, the smartphone features the usual options which include dual-SIM support with 3G, Wi-Fi, Bluetooth and GPS. Unlike its brother, the phone misses out on 4G compatibility, which should have been there considering its price tag. 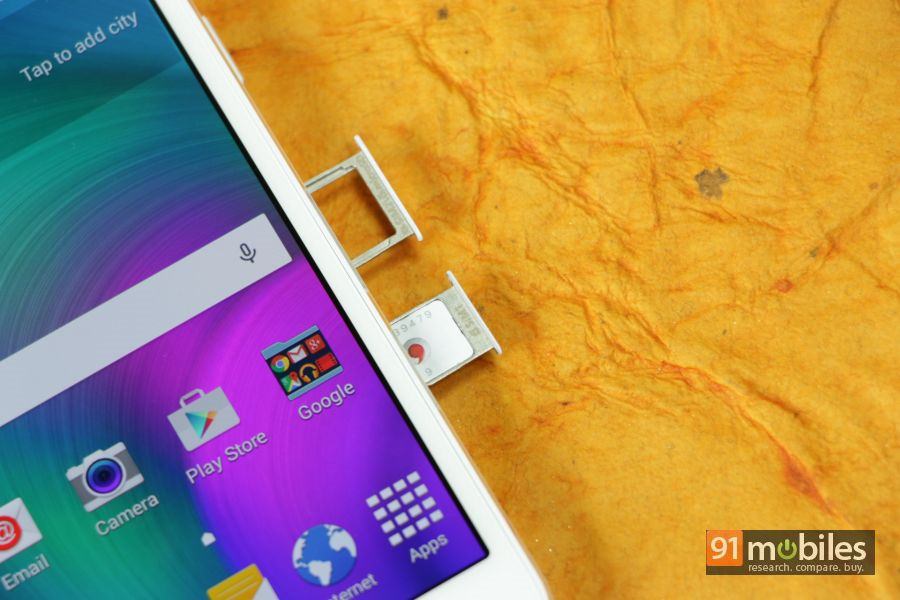 Juicing up the Galaxy A3 is a 1,900mAh battery, which might sound low, but is able to power the device through the entire day and then some more. Even with the use of battery-sucking features like GPS and cellular data, the handset can easily last around a day. In fact, the mobile fared better than its sibling in our standard battery rundown test. It lasted slightly more than 10 hours and 30 minutes while playing back an HD video on loop with both the brightness and volume levels set at 50 percent, and Wi-Fi turned off. If you want to extend the battery life, then just like its sibling, you get the option of Ultra power saving mode, which turns the interface to grayscale and offers access to basic functionality. 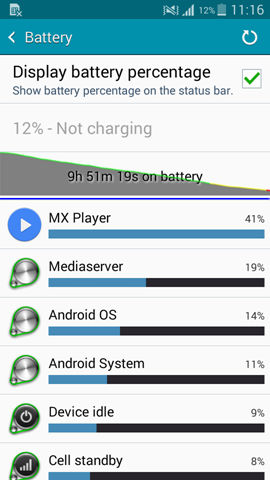 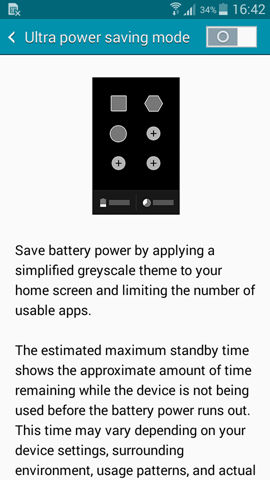 Like all its offerings, the Chaebol is charging a premium for the Samsung Galaxy A3. The device was launched at the asking price of Rs 20,500, though now it’s available for as low as Rs 18,000. As you might have gauged from our review, the smallest sibling in the brand’s latest Galaxy A series is a decent smartphone, but when we bring its pricing into the picture, then it becomes a difficult case for the A3. 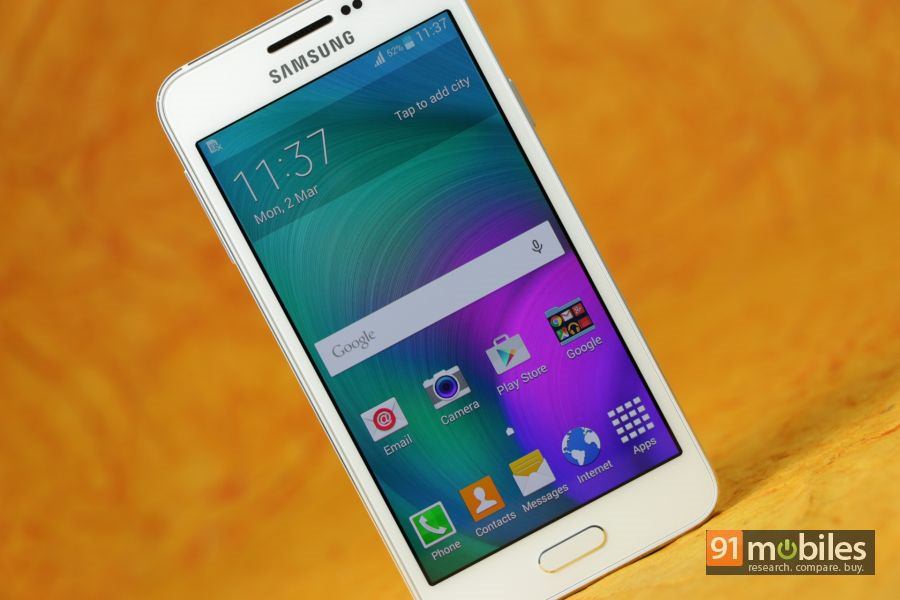 The fact that in the recent past, there have been numerous phones which have upended the traditional concept of specs vs price ratio, makes it even tougher for the Samsung Galaxy A3. Around its price band, you can get loaded options such as 2014’s flagship killer, the OnePlus One (16GB model), Xiaomi’s flagship, the Mi 4 (16GB variant), the stylish multi-layered Lenovo Vibe X2 (review) or even the most affordable smartphone with 3GB RAM, the Honor 6 (review).

However, if you’re looking for a handy device from a reputed brand in the mid-budget segment, while ensuring that it doesn’t make compromises in the spec department, then the Samsung Galaxy A3 can be a worthy shortlist.

Competitors for Samsung Galaxy A3
ShareTweetShare