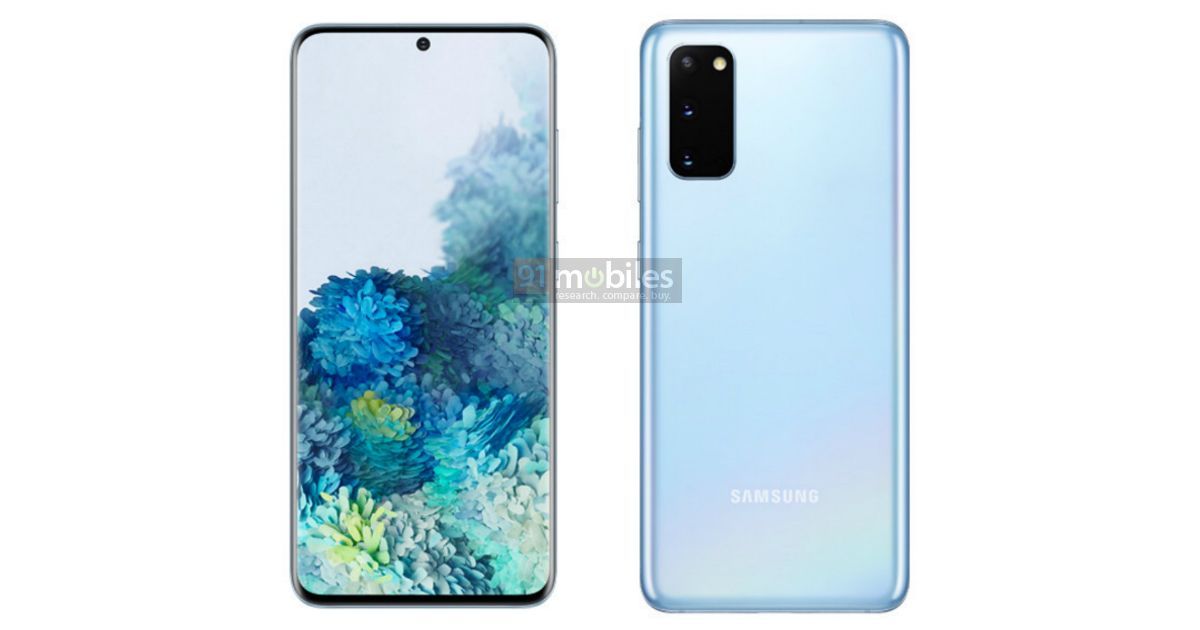 Samsung Galaxy S20 and Galaxy S20+ are set to be launched by the brand on February 11th in San Francisco but ahead of the official launch, 91mobiles has obtained the official renders of the upcoming smartphones from a reliable source – Ishan Agarwal. Apart from the official renders, which provide an up-close look at the upcoming smartphones and reveal all the design details, we have also managed to get the pricing details of the Galaxy S20 and Galaxy S20+ as well. Interestingly, the renders also confirm that these two smartphones will feature 2.5D curved glass, instead of the 3D glass used on the previous flagships from the brand, which means that you will be able to use tempered glass screen protectors on the phones with ease.

Coming to the renders, as you can see, the Samsung Galaxy S20 will feature a rectangular camera module with three camera sensors, assisted by an LED flash on the top-left side at the back. On the other hand, the Plus model has an extra sensor in the camera module, meaning a total of hour cameras on the back.

The volume rocker and the power buttons can be seen on the right side of both the phones, while there are no buttons on the left spine. It seems like Samsung has finally given up on a dedicated button for Bixby for good. Coming to the front side, the Infinity-O display can be seen with its circular cutout right in the middle at the top of the nearly bezel-less display. Have a look at the phones up-close from the gallery given below:

As per the leaked specifications, Samsung Galaxy S20 5G will sport a 6.2-inch WQHD+ (3,200 x 1,440 pixels) Infinity-O display with a Dynamic AMOLED panel and an aspect ratio of 20:9. This panel will offer a maximum of 120Hz refresh rate and 563ppi pixel density. The handset is expected to be powered by the new generation Samsung Exynos 990 chipset with an integrated 5G modem. The smartphone has been tipped to come with 128GB native storage, and up to 1TB external storage support.

If we talk about optics, the triple camera module at the back is said to come with a 12-megapixel primary sensor, a 64-megapixel telephoto unit, and a 12-megapixel ultra-wide shooter. The smartphone is expected to house a 4,000mAh battery and run Samsung’s latest interface version – OneUI 2.0, based on Android 10.

The Samsung Galaxy S20+ 5G shares a lot of the specs with the regular variant, as per the leaked information. However, there are some key differences to be noted. Notably, the Plus variant comes with a larger 6.7-inch display panel. At the rear, the camera setup on the Plus is said to feature an additional 3D time of flight (ToF) camera. In terms of battery capacity, the S20+ reportedly comes with a larger 4,500mAh cell. Apart from these specs, rest of the Galaxy S20+ specifications are expected to be same as that of the Galaxy S20.