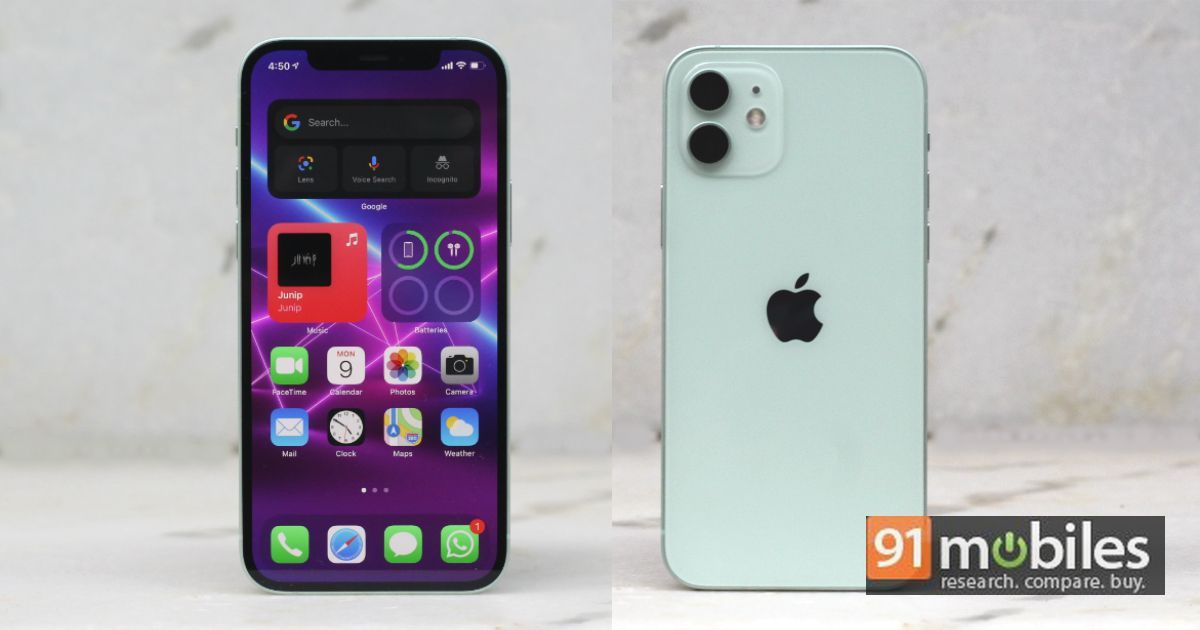 The iPhone 12 range brings the latest smartphones from Apple to its millions of fans. And like every launch cycle, the offerings in the iPhone 12 are outrageously expensive, especially in the Indian market. The iPhone 12, possibly the most sought after model in the series, has been priced starting at Rs 79,900 for the variant with 64GB storage. But a new teardown reveals that the bill of materials (BOM), or the total cost of all components of the iPhone 12, comes out at just $373, which is roughly Rs 27,500. Why then is the iPhone 12 price in India as steep as Rs 79,900? Let’s get to the facts.

Firstly, let us help you with this BOM breakdown, undertaken by Japanеsе teardown experts Fomalhaut Techno Solutions, as reported by Asia Nikkei. The experts estimated the Qualcomm X55 5G modem at $90, Samsung OLED display at $70, Apple A14 Bionic chipset at $40, flash memory at $19.2, RAM at $12.8, Sony’s camera sensors at around $7.9, and so on. This brings the total cost of all components, as mentioned, to around $373 or about Rs 27,500. This is significantly less when compared to its retail price that starts at Rs 79,900.

What is missing from the picture are all the hidden costs that add up to make the iPhone 12 as expensive as it is in India. Let’s start off with the most obvious one – import duty. Apple manufactures and assembles a lot of its components for the iPhone 12 outside of India. Due to this, the Indian government charges steep import duties for bringing the iPhone to India, which is high compared to other smartphone players that prefer to manufacture and/ or assemble a majority of the components in India.

This leads to a price increase. For instance, the iPhone 12 is priced at $830 in the US, which is roughly Rs 61,400. Even if you add 6-8 percent sales tax, it is still relatively affordable compared to the India price tag of Rs 79,900. But even that does not justify the premium compared to the BOM. So, what else?

Apple is one of the few smartphone companies that designs and manufactures its own chipsets and panels. It makes smartphones that tens of millions of customers buy every year. Thus, it is necessary to set a standard in the global market with every upgrade. To do that, Apple invests billions of dollars every year into research and development (R&D) to keep up with the trends and to incorporate the most advanced technology in their smartphones.

This investment into R&D is the reason why your Face ID works seamlessly (almost all the time, at least), why Apple’s chips are some of the most powerful in the market, and why the iPhone runs like a breeze despite lower RAM than its Android counterparts. These small incorporations go a long way in making the smartphone as efficient as possible.

Apple is a global technology brand. It has to reach billions of potential customers all over the world. And that’s why a large portion of its expenditure goes into marketing the iPhone 12. While we don’t say that other smartphone companies do not have to market their products, Apple’s way of doing it is sort of larger than life.

Thus, the price of an iPhone also incorporates several billion dollars that Apple spends in its marketing efforts. That said, this is more of an observation than a justification.

Next up is after-sales service. Apple is known for its stellar service, which can be seen in its policies including international warranty, easy phone replacement options, skilled technical help at retail stores, quick turnaround time, and more. With several awards, it is clear that Apple is one of the frontrunners when it comes to offering top-notch after-sales service to customers.

Once again, even this is a hidden cost that is eventually transferred onto the end-user. Setting up massive stores and hiring the best talent takes a lot of spending, which is then added to the final price of the iPhone 12.

Finally, there is the case of shareholder value. While this might not be as relevant to the customer base in India, there are still millions of investors in Apple who wish to make wealth from the brand, which is also the world’s first $2 billion company. Thus, making steady profits and massive revenues helps Apple stay on top of its game, leaving its shareholders ecstatic.

The Apple iPhone 12 is one of the most expensive mainstream smartphones one can buy in India. Despite its steep price tag, the lucrative R&D and marketing strategies have helped Apple shine as possibly the most premium player in India’s smartphone market. Customers continue to buy iPhones despite the BOM that might be 1/3rd of the retail price. That, ladies and gentlemen, is the charm of the forbidden Apple.