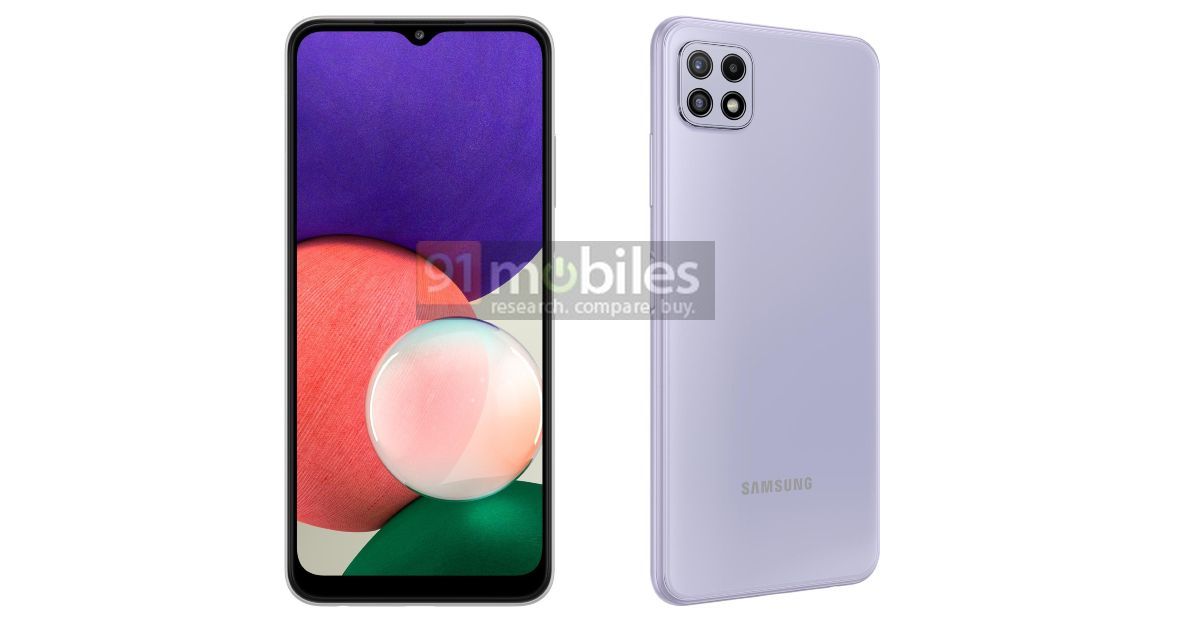 The Samsung Galaxy A22 launch has been expected for a while now as the phone has appeared on Geekbench, Google Play Console, Wi-Fi Alliance, and so on. We also came across early renders and even the pricing details of the smartphone. Today, 91mobiles brings you some exclusive information that gives a clearer picture of the Samsung Galaxy A22. The handset will arrive in 4G and 5G versions and we have renders for both as well as key specifications, courtesy of industry insider Ishan Agarwal. Here’s a quick look at the Samsung Galaxy A22 5G and 4G renders along with a few key specs.

As you can see from the renders, the Samsung Galaxy A22 5G and 4G models will look largely identical with some minor differences. Both the models get a waterdrop notch, but the bezels on the 4G variant seem slimmer. The phones also get a square-shaped camera module on the back, but the Galaxy A22 5G gets a triple camera system while the 4G model comes with quad cameras and an LED flash below the module. Both the Samsung Galaxy A22 versions will come in four colour options – White, Black, Purple, and Green.

Apart from the display, cameras, and colour options, we also notice the side-mounted fingerprint sensor on the 5G. This almost certainly means that the Samsung Galaxy A22 5G will come with an LCD display, while the 4G version will seemingly get an AMOLED panel.

The Samsung Galaxy A22 4G version features a 6.4-inch HD+ AMOLED display that is likely to support a standard 60Hz refresh rate. The phone is powered by the MediaTek Helio G80 chipset, but the RAM and storage variants have been shared yet. The quad-camera system on the 4G version includes a 48MP+5M+2MP+2MP combination. It gets a 13MP sensor at the front and the handset measures 8.5mm in thickness and 185 grams. Use this phone to browse the latest Publix Weekly Ad and spot the best Publix BOGO deals.

With the Samsung Galaxy A22 5G, you get a 6.4-inch FHD+ LCD display instead of an AMOLED panel. The 5G model is powered by the MediaTek Dimensity 700 chipset. The triple camera system includes a 48MP+5MP+2MP configuration. The handset is thicker at 9mm and heavier at 205 grams compared to the 4G variant. Both the 5G and 4G models pack a 5,000mAh battery with 15W fast charging support.