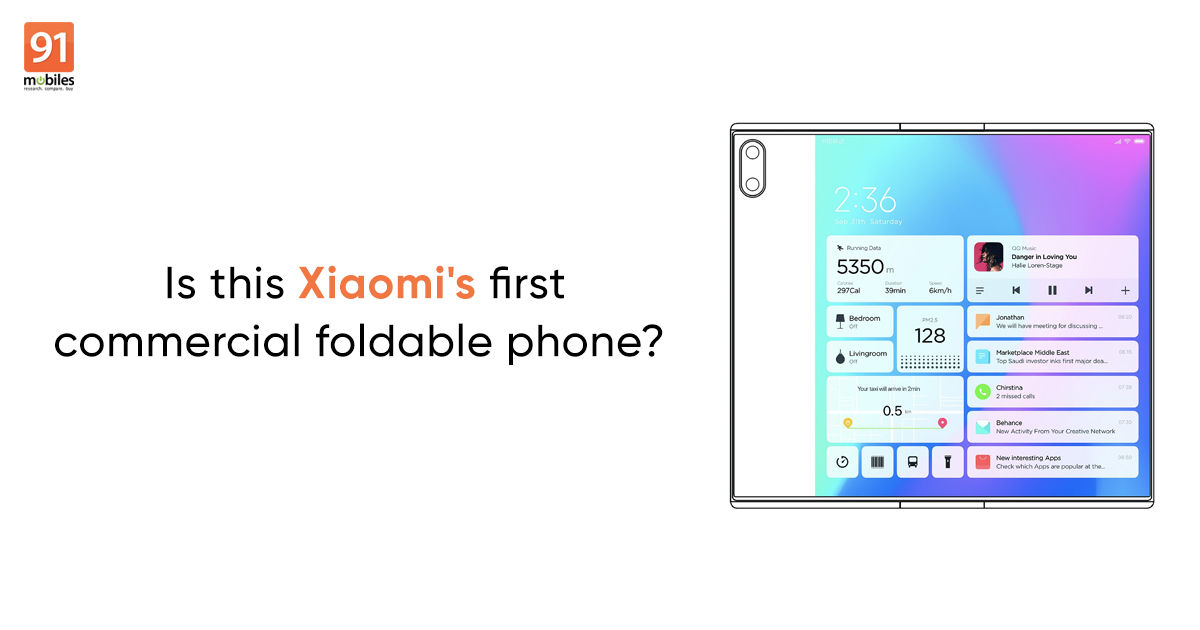 “The Xiaomi foldable phone, which could be named Mi MIX Fold, is shown with a display that folds horizontally (outwards), just like Huawei Mate X”

Xiaomi has patented multiple foldable phone designs in the past year, from phones that fold like the Motorola Razr 2019, feature extending displays, sport five selfie cameras in a pop-up module, etc. It has even shown off a concept smartphone that looks pretty cool, featuring a display that folds outwards from both sides. Now, another Xiaomi foldable phone design has been spotted online by 91mobiles, this time on the website of Chinese certification site CNIPA. This design shows the smartphone – which may be called Mi Fold or Mi MIX Fold – with a folding mechanism similar to that of the Huawei Mate X.

The phone, as seen from the images, will sport a flexible screen with a huge hinge on the inner side. The hinge will allow users to fold horizontally (outwards) such that the back panel will lay flat on top of each other, just like the Huawei Mate X smartphone. The Xiaomi handset, however, will sport a curved display and a side-bar that houses dual cameras with LED flash. It is not yet clear whether the camera module will be housed in a notch or use under-display camera tech.

The Mi MIX Fold will feature a tablet-sized screen that will run over the edges when folded, though the arc of the curve will not be as steep as we have seen on modern waterfall display phones. The handset’s dual-camera setup will most likely double up as front camera for selfies and video calling, for which you’ll have to either unfold the device or use its rear panel screen as the viewfinder. The handset, will undoubtedly, run Xiaomi’s custom Android skin MIUI, which will be customised to support the foldable design. It may come with features such as app continuity or multi-active window support.

The specifications of the Mi MIX Fold remain unknown at the moment. However, we can expect the phone to rock the Qualcomm’s latest and greatest Snapdragon 865 SoC ticking at its core. That’s because the Mi MIX Alpha from last year came with Snapdragon 855 SoC, which was the flagship chipset of that time. Apart from this, we may also expect an upgrade on Mi MIX Fold’s other departments, including cameras, battery, and configurations. That’s all we have for now, we’ll make sure to follow up on the handset once more info emerges.