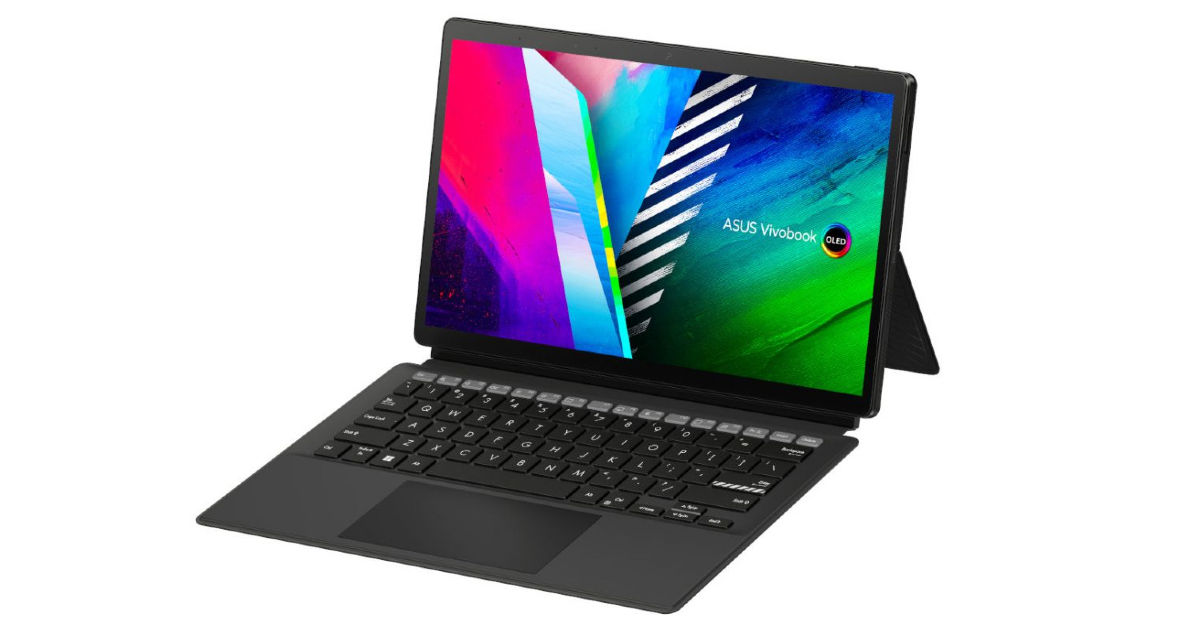 ASUS Vivobook 13 Slate has been launched in India as the company’s latest 2-in-1 convertible notebook. This came as a surprise as fans were expecting the brand to launch an OLED TV, going by a recent teaser. The Vivobook 13 Slate is the world’s first 13.3-inch OLED Windows detachable laptop. The company is promoting the laptop will re-define the TV viewing experience as it allows for people to watch content always on the go and in a more flexible way. The Vivobook 13 Slate features an OLED display with Dolby Vision support, which is claimed to offer a more immersive viewing experience, ASUS Pen 2.0 Stylus, a magnetically detachable full-size keyboard, and a detachable hinge that goes almost flat at 170-degrees. The ASUS Vivobook 13 Slate sports a 13.3-inch OLED touchscreen display with a 16:9 aspect ratio, HDR, 1920 x 1080 resolution, a 1,000,000:1 contrast ratio, 0.2 ms response time, 1.07 billion colours, and up to 550 nits of peak brightness. It is certified by TUV Rheinland and has support for Dolby Vision as well. There is Corning Gorilla Glass protection and anti-fingerprint coating. It weighs just 785 grams and measures 7.9mm in thickness.

The laptop can be used in landscape or portrait mode, with or without a keyboard. The tablet mode allows taking notes much simpler on the go. There’s support for ASUS Pen 2.0 that features 4096-level pressure sensitivity levels and as low as 5g of pen tip force. It samples at 266Hz and has less than 36ms of latency. The ASUS Pen 2.0 charges via the hidden USB Type-C port. It supports a one-click launch via Bluetooth. There is a fingerprint sensor for security, a 5MP front camera and a 13MP rear camera. 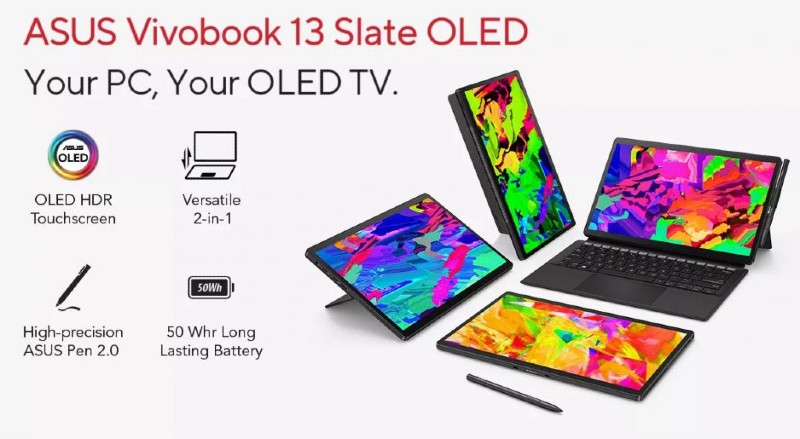 The ASUS Vivobook 13 Slate OLED comes bundled with a slim and detachable keyboard. It attaches magnetically. It is equipped with four built-in speakers with Dolby Atmos support for an all-new listening experience. The laptop is powered by the latest Intel Pentium Silver N6000 quad-core processor with up to 8GB LPDDR4X RAM and 256GB PCIe 3.0 SSD. This could one of the few laptops to boot Windows 11 Home OS out of the box.

Ports on board include two USB 3.2 Gen 2 Type-C ports that support data transfer, functions as DisplayPort, and power delivery, and MicroSD card reader. Connectivity features include Dual-band 2×2 Intel Wi-Fi 6, 3.5mm audio jack, and Bluetooth 5.2. It features a 50Whr battery and is claimed to last over 9 hours of battery life on a single charge. It also features integrated ASUS Battery Health Charging technology that’s designed to reduce battery expansion during charging. It is claimed to charge 60 percent in just 39 minutes.