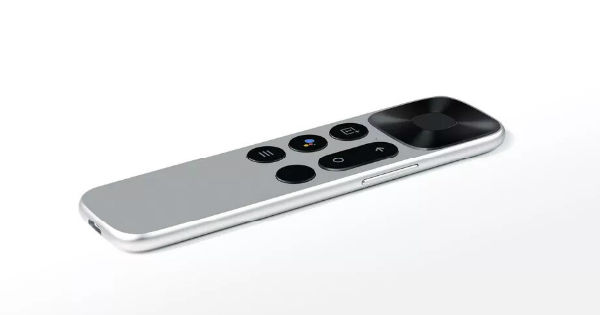 OnePlus TV is scheduled to go official in India sometime this month, and newer details about the product are surfacing the internet every other day. Recently, OnePlus CEO revealed the TV would pack a dedicated ‘Gamma Colour Magic‘ picture processor and the Amazon listing confirmed 50W speaker output, Dolby Atmos sound, Dolby Vision, and 4K resolution. Now, OnePlus CEO Pete Lau has tweeted the picture of the TV’s remote control. This suggests the OnePlus TV remote will have a USB-C port, a dedicated Google Assistant button, OnePlus logo, what looks like a menu button, regular navigation buttons, and a blank whose function isn’t clear.

Take a closer look. The power is in your hand! #OnePlusTV pic.twitter.com/TL5ymlOWIz

Furthermore, the remote also shows off touchpad-type layout at the top. It’s evident that OnePlus has been inspired by the Apple TV remote, given the minimal layout. Tapping the Google Assistant button should trigger the virtual assistant for hands-free voice control, but it remains to be seen what the OnePlus logo and the blank button would do. It’s already confirmed the OnePlus TV would be running on a customised version of Android, with promised updates for three years. It is said to come with seamless integration with the smartphone and will also have content from various OTT platforms, including Jio streaming apps.

The OnePlus TV is expected to be powered by the MediaTek MT5670 processor paired with 3GB of RAM. The built-in ‘Gamma Color Magic’ picture processor is claimed to bring realistic and immersive image quality on the customised QLED panel with the widest colour gamut. Given the pace at which OnePlus is revealing newer details in such a short span, one can hope the launch might be right around the corner, and we should know more information soon.