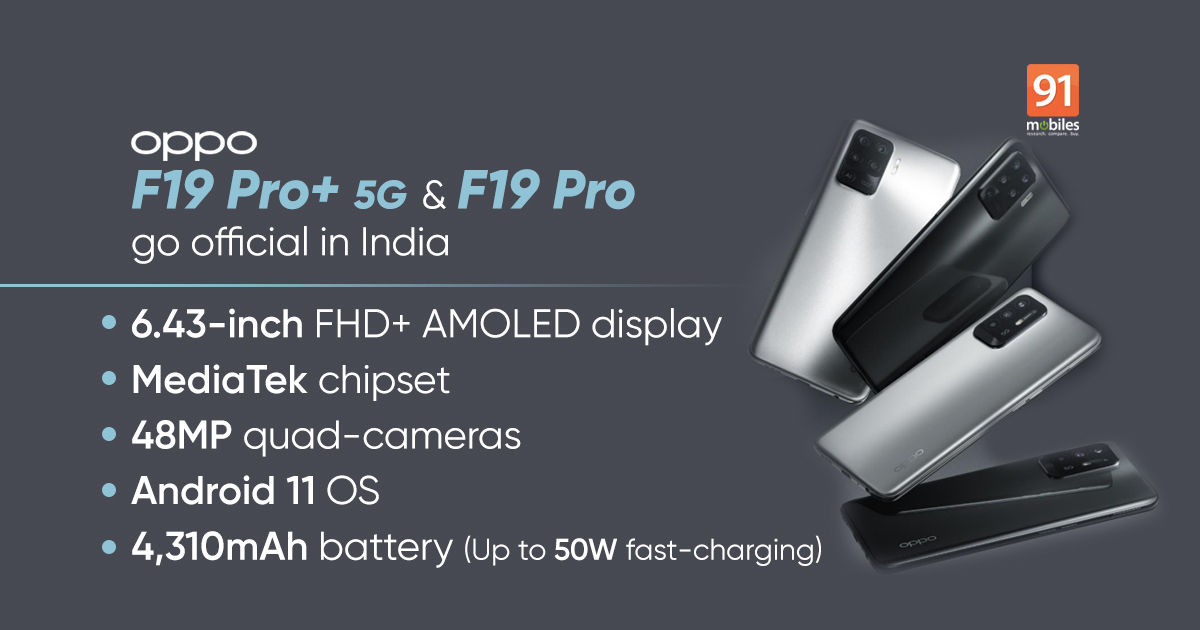 OPPO F19 Pro+ and F19 Pro prices in India, specifications, and sale dates have been revealed officially as the phones launched in India. The latter comes as a successor to the F17 Pro that was launched back in September 2020. On the other hand, the OPPO F19 Pro+ is the first Plus model in the series and brings 5G connectivity for the first time to the company’s F-series. Both the phones share similar design and specifications, including a punch-hole design for the selfie snapper, an in-display fingerprint sensor, an AMOLED panel and a square camera module at the back. OPPO F19 Pro+ and F19 Pro specifications include a 6.43-inch display, Android 11 OS, 48MP camera, 4310mAh battery, and MediaTek chipsets.

At the event, the company also announced the OPPO Band Style, a fitness tracker aimed at the budget segment, and teased the launch of the vanilla OPPO F19 smartphone in India.

The OPPO F19 Pro+ price in India is Rs 25,990 for the single 8GB + 128GB configuration. On the other hand, the OPPO F19 Pro is priced a little lower at Rs 21,490 for the model with 8GB RAM and 128GB storage and its 8GB + 256GB variant costs Rs 23,490. Both the phones will be available in Fluid Black and Crystal Silver colours, while the Fantastic Purple hue will be limited to OPPO F19 Pro only. The OPPO F19 Pro+ will be available from March 25th via Amazon and offline stores, while the F19 Pro will go on sale from Flipkart and retail stores from March 17th. 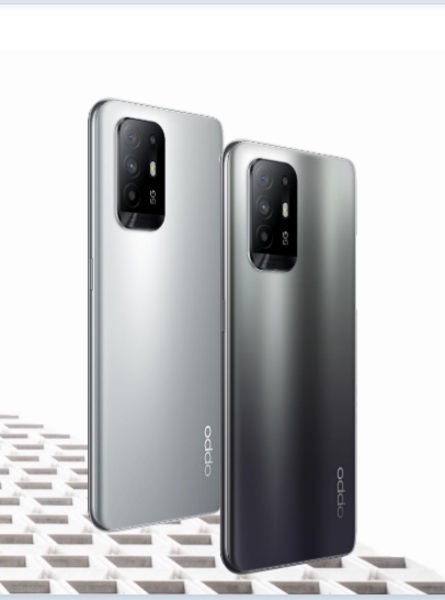 OPPO F19 Pro+ sports a 6.4-inch FHD+ AMOLED display with a punch-hole cutout for the selfie camera, 2400×1080 pixels resolution, 60Hz refresh rate, Corning Gorilla Glass 5, 20:9 aspect ratio, 408 PPI pixel density, and 90.8 percent screen-to-body ratio. It is powered by the MediaTek Dimensity 800U 5G coupled with 8GB RAM and 128GB storage that is further expandable via a microSD card up to 256GB. The phone runs on Android 11-based ColorOS 11.1 custom skin out of the box and has an in-display fingerprint sensor for security.

As for the cameras, the F19 Pro+ has quad-cameras at the back with a 48MP (F/1.7 aperture) primary sensor, an 8MP (F2.2) wide-angle-macro lens, a 2MP (F2.4) portrait sensor mono lens, and a 2MP (F2.4) macro mono camera. The cameras support features like AI Highlight Portrait Video, Dual-View Video, and Ultra Night Video (that can automatically detect and apply algorithms to improve the nighttime footage by up to 26 percent), AI Scene Enhancement 2.0, Dynamic Bokeh, and Night Plus Mode.

There is a 16MP snapper on the front for selfies and video chats and a 4,310mAh battery with 50W VOOC flash charging support fuels the phone. It measures 160.1 × 73.4 × 7.8mm and weighs 173 grams. Connectivity features include 5G, 4G LTE, dual-band Wi-Fi, Bluetooth 5.1, GPS, and USB Type-C port for charging and data transfers.

The OPPO F19 Pro+ 5G features Smart 5G, which utilises eight antennas that cover the full spectrum of 2G, 3G, 4G, 5G and GPS connections for a strong connection. It has a 360-degree Antenna 3.0 to avoid signal dropping and the 5G network should be enabled manually. The phone switches between 4G and 5G seamlessly and the dual-network channel speeds up the network access by connecting to both Wi-Fi and 4G/5G channel or two Wi-Fi connections at the same time.

OPPO F19 Pro retains specifications similar to that of the F19 Pro+ 5G. The differences being the F19 Pro comes with MediaTek Helio P95 4G chipset and 30W fast-charging. The other key specifications such as a 6.43-inch FHD+ AMOLED display, 4,310mAh battery, 128GB storage, 48MP quad-cameras, and Android 11 OS are also seen in the Plus model. It has a 16MP snapper on the front for selfies and video chats. The phone also supports features like AI Colour Portrait Video, Dual-View Video, AI Scene Enhancement 2.0, Dynamic Bokeh, Night Flare Portrait, and AI Beautification 2.0.