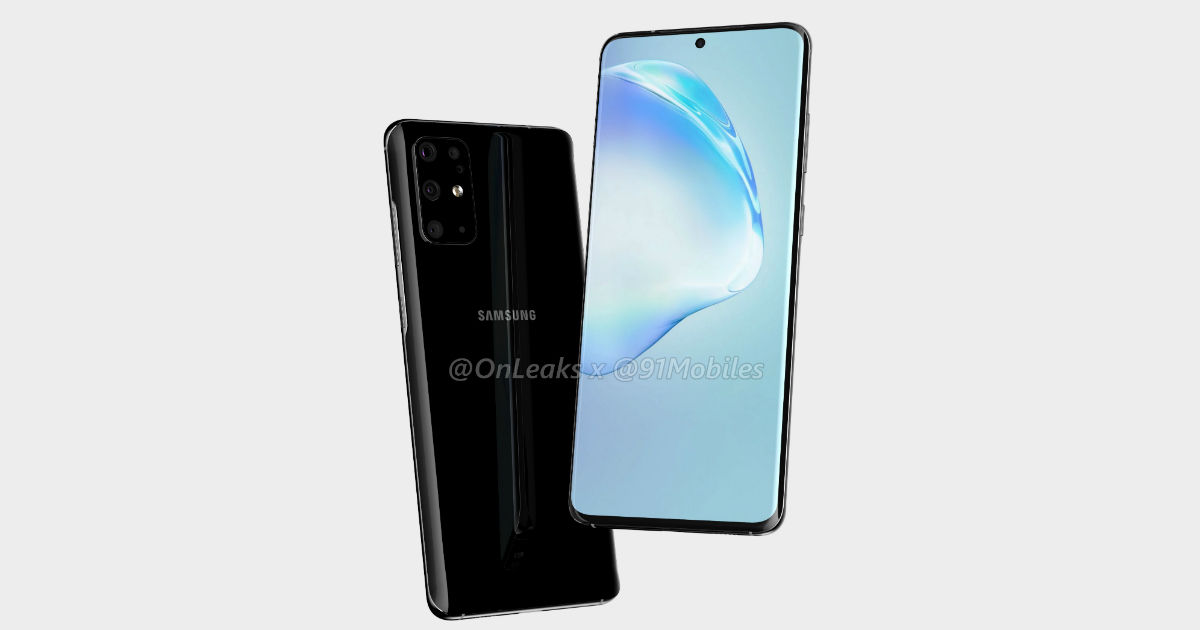 “The hole-punch on the Samsung Galaxy S11 display will be repositioned to the centre, just like on the Galaxy Note 10 series”

With the year coming to a close, all eyes are on the Samsung to launch 2020’s first flagship smartphone, the Galaxy S11. It is expected the brand will launch the Samsung Galaxy S11 lineup in three sizes, with the S11e and S11 getting both 4G and 5G variants, while the S11+ is said to come with 5G as standard. Ahead of the launch, 91mobiles has partnered with @OnLeaks to bring to you high-quality renders of the upcoming Samsung Galaxy S11. These renders reveal the design changes we can look forward to from the company, along with a few surprises in the camera department.

The first thing to note in the renders is that hole-punch in the display panel of the Samsung Galaxy S11 will be moved to the centre – this replicates the design we have seen in the Galaxy Note 10 series. The bezels both above and below the display appear to be slimmer than those on Galaxy S10, while those on the sides seem to be of pretty much the same thickness. Barring the display, the front panel only has a thin earpiece. The screen will measure between 6.63-inch and 6.7-inch and will curve on the sides – it should be noted that the curvature of the display seems relatively lesser than what we saw on the 2019 model. Older smartphone models can easily open any grocery ads such as Food Lion Weekly Ad with no performance lack.

Moving on to the sides, we can see the volume and power buttons will be located on the right edge. The area where the two physical buttons are placed seems to a little raised, likely in order to make it easier for the user to press the keys. The left is devoid of any keys whatsoever. Below the screen is the USB-C port, flanked by speakers on the right and a mic on the left. OnLeaks says the phone will be 161.9 x 73.7 x 7.8mm in size (8.9mm including the rear camera bump), feature a glass back, and a metal frame.

On the back, we see the new L-shaped camera system, which has also been spotted on the renders of upcoming Galaxy A51 and A71 smartphones. The handset will have as many as five sensors on the back. While we know three of these will be the regular cameras and one should be the 3D ToF sensor, the purpose of the last sensor is not yet known. These will be supplemented by a LED flash and what looks like laser autofocus module. Other than the camera system, the back panel only has the Samsung logo.

As per the rumour mill, Samsung Galaxy S11 series will be a beast in the camera department. The lineup is said to flaunt a ‘new’ 108-megapixel primary camera, which is expected to be better than the 108MP Samsung ISOCELL HMX sensor than the one on Mi Note 10 and Mi MIX Alpha. The handsets are also expected to debut 5x optical zoom, Deep Fusion-like technology, and camera features such as Single Take Photo, Director’s View, Night Hyperlapse, Vertical Panoramas, an impressive 8K video recording, and much more.

As mentioned earlier, Samsung Galaxy S11 series is also expected to come in three screen sizes. The affordable Galaxy S11e is tipped to sport 6.3-inch/6.4-inch screen, while the Galaxy S11 and Galaxy S11 Pro could pack 6.7-inch and 6.9-inch displays, respectively. The panels will most likely be Dynamic AMOLED, sport punch-hole for selfie cameras, offer HDR10+ support, have up to QHD+ resolution, and feature an ultrasonic in-display fingerprint scanner. Rumours are rife that the Galaxy S11 series could come with 120Hz refresh rate.

Apart from this, all the three models are expected to come with both 4G and 5G connectivity, Qualcomm Snapdragon 865 SoC/ Exynos 990 SoC (depending on the market) ticking at their cores, and Android 10-based One UI 2.0 custom skin to take care of software side of things. The premium offerings from Samsung will reportedly debut as early as February 18th next year.