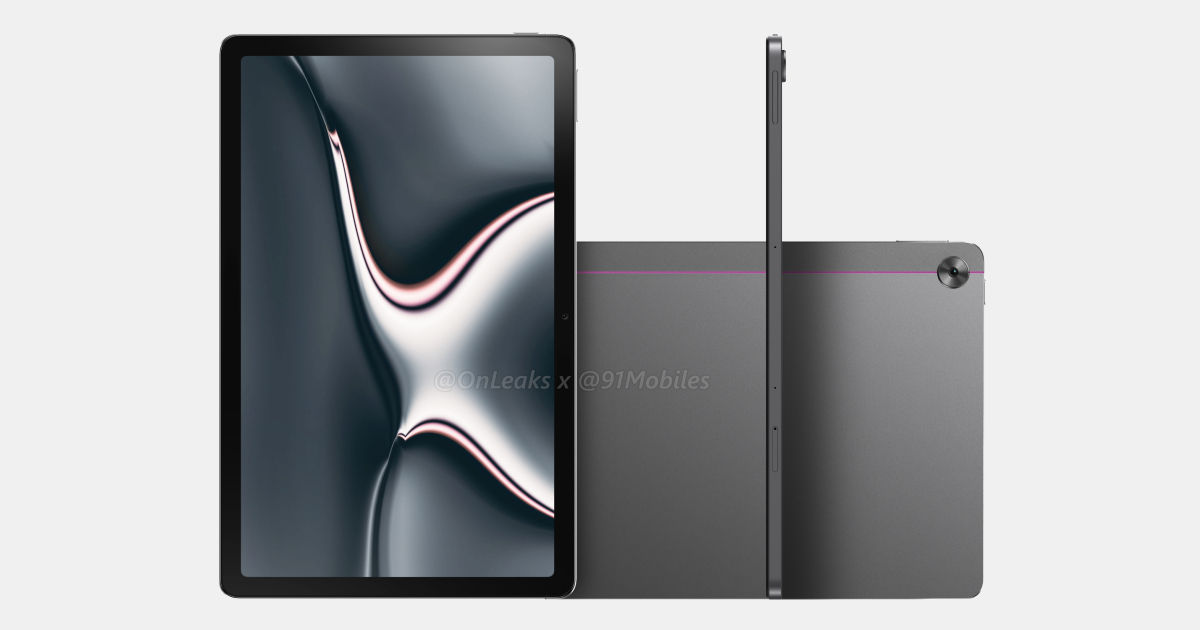 The Realme Pad tablet was teased officially last month during the brand’s launch of the Realme GT smartphone in Europe. It was spotted in public once and has stopped by certification agencies in a few countries too. Today, 91mobiles and noted industry insider Steve Hemmerstoffer of @onleaks fame are bringing to you Realme Pad renders that reveal what the upcoming tablet will look like from all angles. We also have some other details about Realme Pad, including the screen size, dimensions, and more. So let’s get on with the design, specifications, and other details of the tablet.

According to the renders shared with us by @onleaks, Realme Pad will have a display measuring roughly 10.4 inches in size. The renders show the tablet will look like a generic slab with a protruding single rear camera and flat sides; the design of this frame is reminiscent of the iPad Pro 2020’s. Realme branding can be spotted on the back, along with a straight line that goes through the camera module to facilitate the dual-tone finish as a bit of a design accent. In the front, the uniformly thick bezels surrounding the screen are clearly visible, as is the single selfie shooter placed in the middle.

The frame on one side features the Power button and two speakers, while the other edge has the USB Type-C port and two more speakers. The volume rocker is located on the frame, close to the camera module. On the same edge is what seems to be a microSD card slot for storage expansion.

One of the most interesting elements to consider here is a slot at the frame housing the USB port – this will hold the stylus that the Realme Pad will ship with. As for the dimensions, the tablet measures 246.1 x 155.8 x 6.8mm, though the thickness increases to 8.4mm if we take the protruding rear camera into account. The tablet in the renders can be seen in a Grey-Black colour scheme, though we can expect more options when it does go official.

That’s all the Realme Pad renders reveal to us about the tablet’s design. A certification listing about the device in the past shows it will be powered by a 7,100mAh cell and will have model number BLT001. Teasers by the company as well as the live images suggest it could come in Silver-Grey colour option. There are no other details about the tablet at the moment. We can expect the device to be launched sometime this quarter or in early October, alongside the Realme Book laptop.