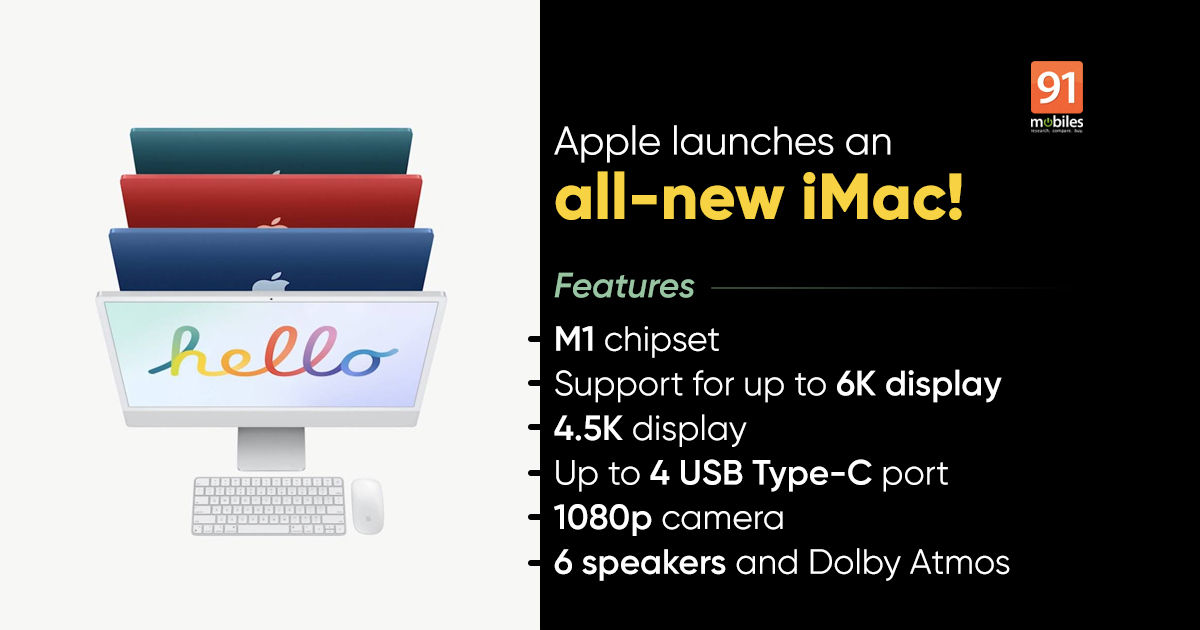 Apple has unveiled an all-new iMac at its Spring Loaded event that was held tonight. Along with the iMac 2021, the Cupertino-based tech giant also launched the AirTag, an upgraded Apple TV, and a new iPad Pro at the event. Coming back to the new iMac, it is available only in 24-inch display size. The new all-in-one PC from Apple brings with it a stunning new design along with the mighty M1 processor. While the iMac 2021 offers a plethora of new features, a few of its highlights include a 24-inch Retina display, 1080p FaceTime HD camera, a six-speaker setup, a three microphone array, Thunderbolt 4 ports, and a new optional Magic Keyboard with Touch ID fingerprint sensor.

The new iMac desktop joins the MacBooks and the iPad Pro 2021 models in being powered by the Apple-made silicon. Another great change the 2021 iMacs bring to the lineup is the wider range of colors available to the buyers.

The Apple iMac 2021 pre-orders in India will start on April 30th and it will start shipping in the country from May. 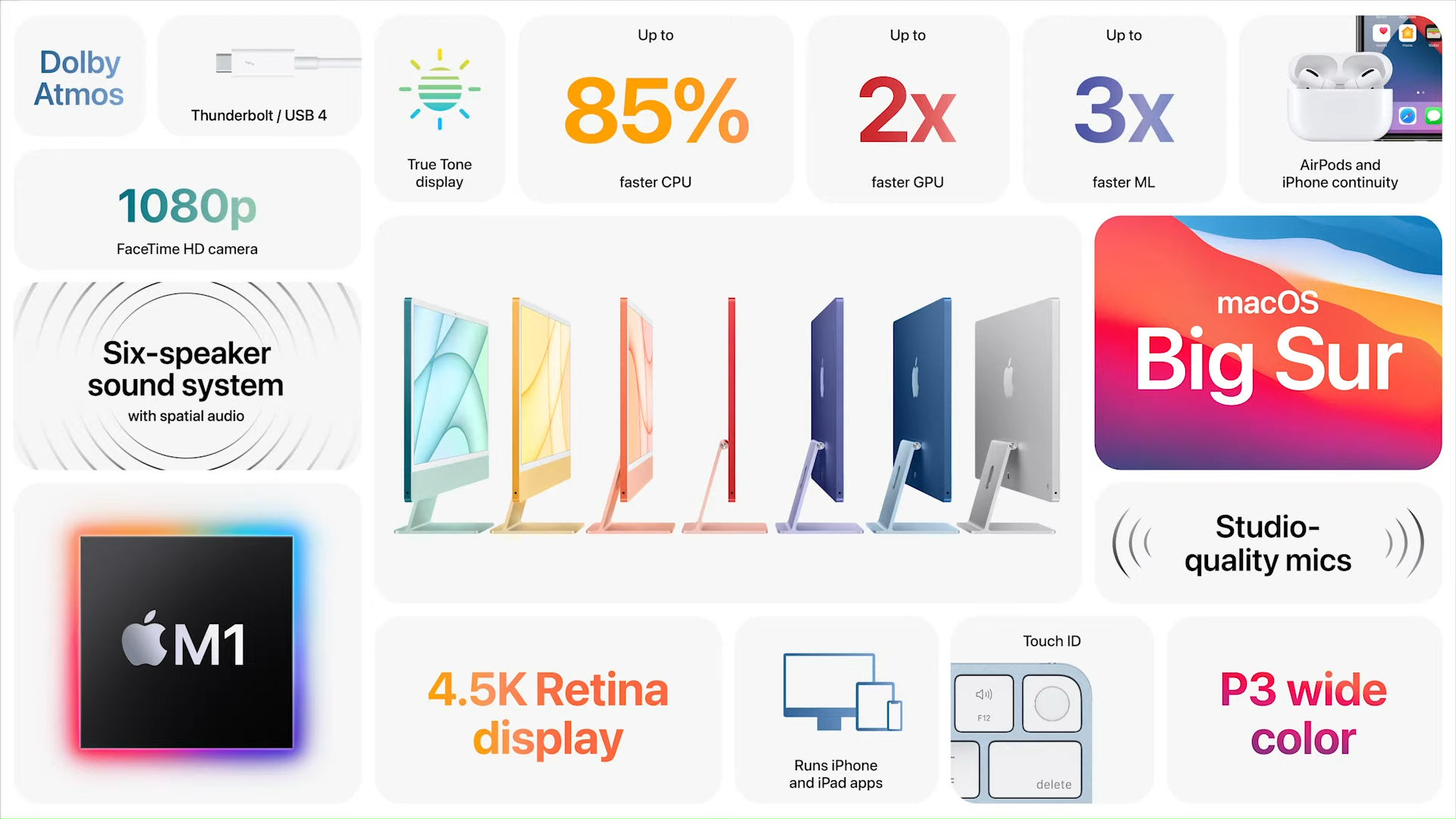 The new iMac has a 24-inch IPS LCD with 4.5K (4,480 x 2,520 pixels) resolution, 500 nits brightness, P3 wide color gamut, True Tone technology, and over a billion colors. Unlike the existing iMacs which have a curved design, the iMac 2021 features a flat back panel along with sharp edges, which gives it a modern look. As mentioned earlier, the new iMac is available in a wide range of funky-looking colors. There are seven color options to choose from: green, yellow, orange, pink, purple, blue, and silver.

Powering the iMac 2021 is Apple’s M1 chipset that does its duty in the MacBook Air and the  MacBook Pro which were launched last year. The M1 SoC for the new iMac is available in two configurations. The first version has an 8-core CPU and a 7-core GPU. The second variant has an 8-core CPU and an 8-core GPU. Both the M1 chips feature a 16-core Apple Neural Engine. According to Apple, the M1 chipset has made it possible for the brand to cut down the size of the motherboard. Taking advantage of the new internal design, the iMac 2021 is almost 50% thinner compared to the existing models. 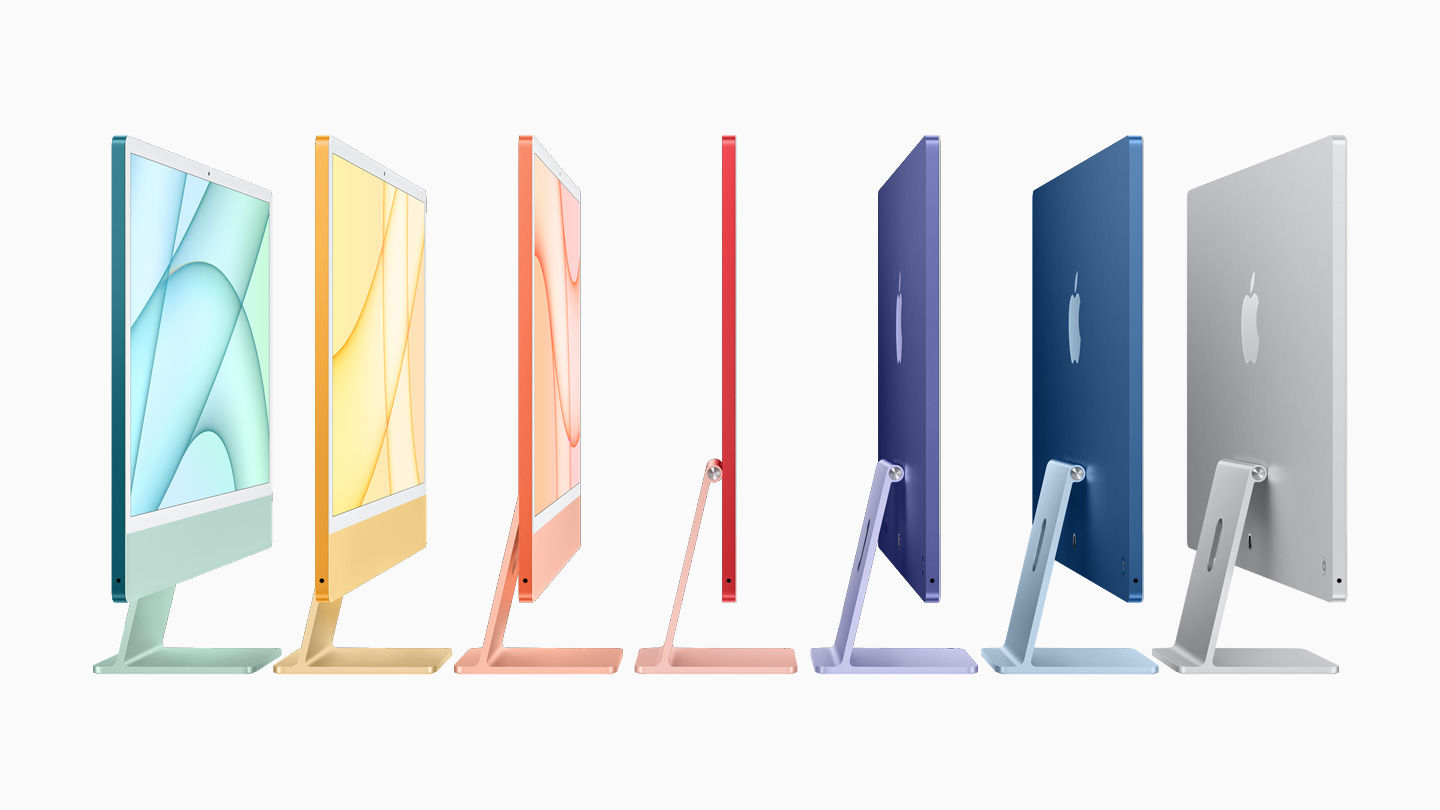 According to the brand, the new iMac has up to 85 percent faster CPU, 2x faster GPU, and 3x faster machine learning capabilities compared to the standard model of the 21.5-inch iMac. Apple claims that the iMac 2021 can handle five streams of 4K footage or one stream of 8K footage in the Final Cut Pro.

Interestingly, the new iMac ditches the 3-pin IEC power connector that we saw in the older models in favor of a new magnetic power connector. The new power plug is easy to connect and it also looks aesthetically pleasing compared to the old one. The power cable is 2 meters long and it is color-matched to the device. What is interesting is that the power adapter features an Ethernet port. So, you can use the Ethernet connection on your iMac without attaching the cable directly to your PC, keeping the cable clutter away from your desk. As for the connectivity, the iMac 2021 has four USB Type-C ports with two of them featuring the Thunderbolt 4 standard, a 3.5mm audio jack, Wi-Fi 6, and Bluetooth v5.0. The new iMac comes with a 1080p FaceTime HD camera, a major upgrade from the 720p unit in the existing models. The iMac 2021 comes with three microphones, which, according to Apple, intelligently reduce the background noise for clear audio during calls. Speaking of which, the new iMac has a total of six speakers (three woofers and three tweeters). That is not all. Apple has also developed an all-new Magic Keyboard for iMac 2021 and its features Touch ID for you to authenticate your PC with the ease of your fingertip. Interestingly, people can get the new Magic Keyboard in the same hues as the new iMac. The Apple Mouse is also available in seven color options to go along with the iMac 2021.