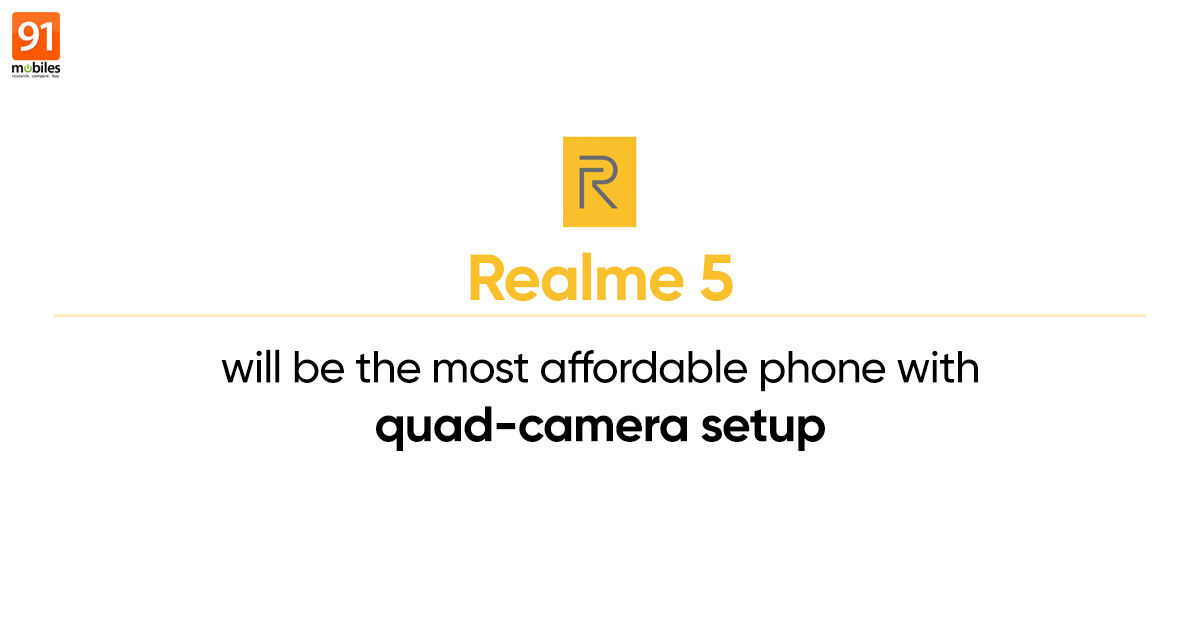 “The Realme 5 price in India is likely going to be Rs 8,999, according to industry sources”

The Realme 5 and Realme 5 Pro smartphones are all set to launch in India next week, on August 20th. They will be the brand’s first smartphones with a quad-camera setup on the back; official teasers have revealed they will have a slimmer U-shaped notch and a fingerprint sensor on the back. Now, 91mobiles has learnt from industry sources that the Realme 5 price in India will be under Rs 10,000, with the price tag likely to be Rs 8,999. This would peg the price at the same level as the Realme 3, which was launched in March at Rs 8,999 for the base variant. Moreover, the handset will pack a HD+ display and Snapdragon 600-series chipset.

Coming to the specifications, the Realme 5 will ship with a near bezel-less screen with an HD+ resolution. Since it’s a budget offering, the handset may sport the same LCD panel as the Realme 3. However, the cut-out atop the display that houses the selfie camera will be slimmer this time. Under the hood, the phone is said to be powered by the Snapdragon 600-series chipset. While the chipset model is unknown, it could be the Snapdragon 665 SoC that also powers Xiaomi’s upcoming Mi A3 smartphone. The Mi A3 India launch is set for August 21st.

The screen size, battery, software, and other details of Realme 5 are unknown yet, but we can tell you it’ll have as many as four cameras at the back. The setup will include a 16-megapixel primary sensor, aided by the ultra-wide-angle lens with 119-degree field-of-view, a macro lens, and a portrait lens. The handset’s elder sibling, the Realme 5 Pro, will also have similar camera arrays but pack a 48-megapixel primary shooter. The vendor claims that the series will be able to capture good low-light photos with a larger aperture and pixel size.

The Realme 5 Pro is further reported to ship with an AMOLED screen, an in-display fingerprint scanner, and Snapdragon 712 SoC ticking at its core. That’s all we know so far!